Happy Friday to my peeps hunkered down at home, eagerly awaiting the end to this covid19 bullshit. Fucking viruses. We're so much bigger, yet some little microscopic asshole can really drag us down. And kill us. Ugh.

I mentioned last week that it's been a few years since we've watched Top Chef, and I'm happy to note that the show hasn't changed one iota. I am averse to change. I fought getting a smart phone for years, and I'm really against the whole teleconferencing thing we're having to do right now as we work from home. Honestly, I don't want to see my coworkers in person at work, so I definitely don't want to see their faces when I'm in my home. Bad enough my dining room table looks like a fucking Best Buy. Home should be a sanctuary, not someplace I'm eager to escape. But I love that TC still has Tom and Padma and Gail, and one or two of them have barely aged.

At the end of last week's show, Padma tells the assembled cheftestants that their next challenge starts immediately. But it really doesn't. At the top of this week's ep, she goes on to say that they won't be having a Quickfire this week. Instead, they'll be dining out at a few of the restaurants in Jonathan Gold's 101 Best Restaurants, a publication put out by the LA Times. Gold was their restaurant critic, a figure beloved by readers and restaurants alike. He was a proponent of LA's smaller, mom-and-pop, ethnic, strip-mall joints, writing about them with the joy of an avid eater. (Wait - I'm an avid eater. Why do I not have more joy?) Gold won a Pulitzer Prize for criticism in 2007, the first food critic to do so. Sadly, he died of pancreatic cancer in the summer of 2018. 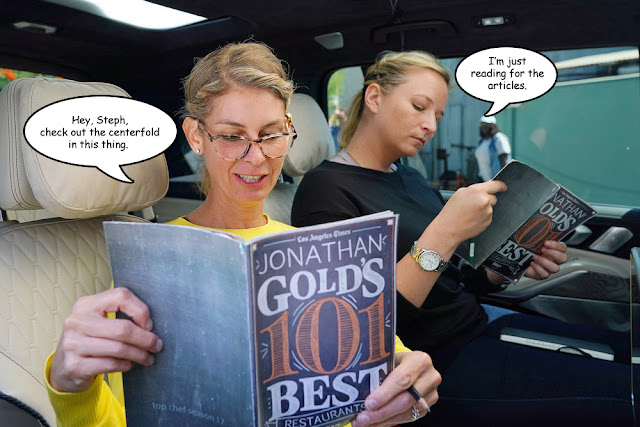 The last issue of 101 Best came out in October of 2017. As volatile as the restaurant industry is, I'm curious as to how many of these places are still open. Open, that is, as of this month, before the mass nationwide restaurant closures. And I wonder how many will survive. [sad emoji]

Padma then goes on to say that while the cheftestants are dining out, they are to let the food inspire them to make a dish of their own. They will cook said dish for 200 guests at an event honoring Jonathan Gold, to be held at Union Station. Additionally, the guest judge for this episode will be Ruth Reichl, who was a very close friend of Gold.

The cheftestants go home, presumably to sleep, at least to shower and change, and to toast the end of the first challenge with glasses of red and cans of Pelligrino Essenza flavored mineral water, the labels conspicuously turned to the camera. The next morning, they set out in their BMW X7 Sponsorship Mobiles.

The fourteen chefs are in four groups, each tackling a different area of Los Angeles. The first group we see is the trio of Melissa, Karen, and Lisa, who hit up Chengdu Taste for spicy Sichuan food, then taco truck Mariscos Jalisco for seafood-based tacos and ceviche, and finally biscuits and such at Manuela.

Kevin, Gregory, Angelo, and Eric first visit Thai restaurant Jitlada, then Ethiopian Meals by Genet, and finally to Republique for updated French fare. We then get a poignant moment where Kevin tells us that a while back a giant tumor was discovered on his kidney, which put him out of action for a year. He is competing to "feel alive." You go, Kevin! One of my favorite cheftestants in his season, though of course I didn't like him as much as um, Bryan Voltaggio. (<3 <3 <3) 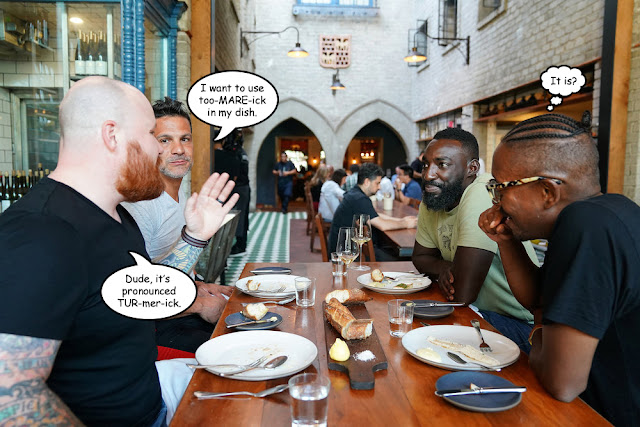 The last group of Jenn, Lee Anne, and Stephanie hit South Indian Mayura, Japanese Shunji, and ???? (Did they get to eat in a third restaurant? No idea.)

The chefs then have $700 to spend at Whole Foods before heading back to the Top Chef Kitchen to prepare their dishes. They pack up after three hours of prep. The next day, they have an hour to complete their dishes at Union Station. 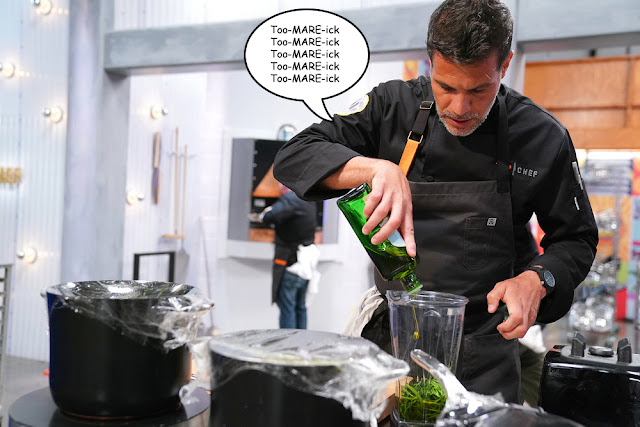 The gathering is full of Jonathan Gold's friends, which includes chefs like Michael Cimarusti and Roy Choi, and actor Jon Favreau. Gold's wife, Laurie Ochoa--arts and entertainment editor at the LA Times--is there as well. The judges are, too, of course, and tag team the cheftestants in teams of two: Padma with Gail, Tom with Ruth.

Karen, who had visited Chengdu Taste with her team, has handmade--wrappers and all--cumin lamb dumplings with roasted chili oil and pickled cucumbers. They look amazing. And as someone who has recently made dumplings and their wrappers, I can say it's not exactly an easy or fast process, even with a friend. Melissa was also inspired by Chengdu Taste, and makes an interpretation of beef tartare using the popular ma la (numbing and spicy) flavors of Sichuan provence. Tom's bite has too much chili, but Ruth's seems just right. Lisa was in the same group as Karen and Melissa, but her dish of pickled chili salad with spicy caramel duck seems to have a different inspiration from the three restaurants they visited. Tom wonders if she was successful in using spice to cut the fattiness of the duck. Which of course she wasn't, if he even asked such a thing.

Kevin was inspired by the duck and mushroom terrine at Republique to make a terrine of his own, which he forms into balls and deep fries and garnishes with apple butter. Ruth raves over the butter, saying he should bottle it. Angelo, who got on my nerves mispronouncing turmeric as "too-MARE-ic" made a soupy concoction that was inspired by the whole deep fried fish dish served at Jitlada, only with raw tuna and way too much sugar. Tom calls it "a savory dish that eats like a dessert," which ain't good. Gregory also mispronounces turmeric, but at least he didn't say it over and over and over like Angelo. His halibut in turmeric and tomato broth with chiles, lime, and pineapple was nicely cooked. Apparently the man has a way with fish. Finally, we have Eric's weird-ass scallop with red cabbage and kitfo oil. He originally wanted to use duck, but Lisa bought all of it. I don't think the scallop was the issue here. His cabbage was undercooked, and the flavors didn't mesh properly. I'm kinda intrigued by "kitfo oil" though. Kitfo is an Ethiopian dish like a spicy steak tartare seasoned with mitmita (a blend of chiles with sweet spices like cardamom and cloves) and a spiced clarified butter called niter kibbeh. Not sure if the oil is just the mitmita and butter, or if there's some way to get the raw meat flavor in there, too. Hm. Nevermind.

Nini's "masa ball soup" impressed all of the judges, though she worried about the simplicity of her masa dumpling and coconut-ginger chicken broth dish. Jamie managed to snag some duck from Lisa and made a duck mole taco with lime crema and fire-roasted chile salsa. The judges nodded but didn't say much otherwise. Bryan did a short rib with charred eggplant puree, fermented radish, and butternut squash vinaigrette that Tom complimented simply by saying it was the first dish that wasn't sweet. Finally, Malarkey makes a beef tartare over fried rice with kimchi vinaigrette, peanut "crack" and fermented egg yolk. He's super confident and bouncing off the walls, as usual. Ruth, who is at her snarky best, says his dish is a "show-off dish" that is what people hate about restaurants. Ha!

Ruth compliments Jenn's vegetarian chickpea and navy bean stew with hominy, herb yogurt, cashews, and pickled red onion by saying it "really honored the challenge." Lee Anne's dish of hayashi with black plums, tomato-seaweed gelee, king crab vinaigrette, and mozzarella got an eyebrow raise from Italian Tom at the combo of fish and cheese, but not much other comment. And finally, Stephanie's "Indian taco" of crispy lamb, curried peas, carrot relish, and cheese on homemade grilled naan earned her a sneer from Padma. Never try to impress Padma with Indian food if you don't actually know anything about Indian food. Or even if you do.

Judges' Table: Bryan, Kevin, and Nini are on top. Tom calls Nini's soup "penicillin in a jar" and claims to have gotten some to go because he is feeling under the weather. Gail says that Bryan's short rib was a departure from anything he's made before, but still had his signature refinement. But Kevin's dish was deemed the best tribute to Jonathan Gold. He fought back tears as he is overwhelmed by the win and the fact that that mofo cancer didn't bring him down.

Angelo, Stephanie, and Eric are on the bottom. Tom again said that Angelo's dish was too much like dessert, as if a pastry chef had coached him on it. Ruth said the tuna "died in vain." Zing! Stephanie's nacho got flayed by Padma, who said it lacked salt, acid, and a POV. Bam! And Eric's cabbage and lack of cohesiveness got him a thumb's down. Ruth opines, "I feel the bottom three chefs forgot that food has to be delicious." Zow! Ruth was on fi-yah!

I wanted Angelo to go home because of the whole "too-MARE-ick" thing, and I got my wish. Sorry  (not sorry), guy. 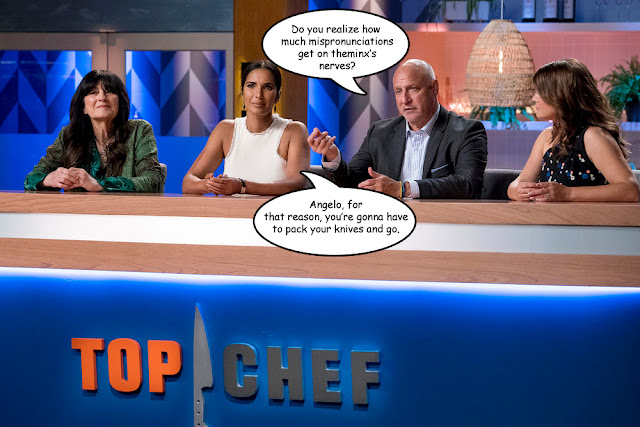