I noticed that a few people have found my blog by doing a Google search for Next Food Network Star contestant Aarti Sequeira's tandoori paste. So I dug around on the Food Network Web site and found it. I was going to post it here, or maybe just the link, but I thought, "why not try it for myself?"

So last weekend I found myself toasting spices in a skillet, adding them to yogurt, and making a marinade. While I had most of the whole spices on hand, I did not have fresh ginger, and I increased the amount of paprika because the dish looked a bit pale when I used the amount as written. Plus I made half as much. My edited version of her recipe follows.

I served the chicken with various sides including the okra dish we got from B'More, some raita made with radishes and cucumber, a quick stir fry of onions and mushrooms seasoned with a little cumin and the leftover tamarind dipping sauce from our B'More samosas, and naans from Trader Joe's.

Our cilantro plant had gone to seed, but I used it for garnish anyway. The fresh and soft green seeds tasted almost exactly like the dried coriander in the dish, but with a tiny bit of cilantro-ish-ness. 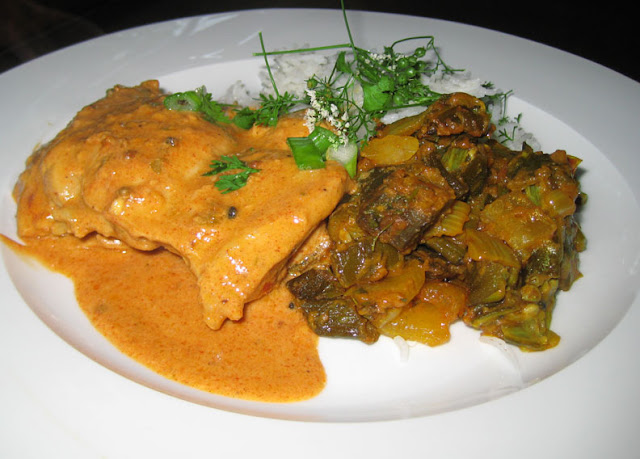 It was really good! The spice mix was so aromatic, three days later the house still smelled like an Indian restaurant. And the sauce was so tasty, I stored the leftovers in the fridge for future use. So far, it's made a great spread for a tuna salad sandwich on leftover naan. :)

Put the chiles, fenugreek, coriander, cloves, the seeds from the cardamom pods, paprika, and cinnamon in a saute pan and heat over medium heat until fragrant and toasty, about 5 minutes. Shake or stir the pan frequently to prevent burning. Grind to a powder in a coffee or spice grinder.

Blend the garlic, ginger, and lime in a food processor until the mixture is very smooth. Add the spice powder and blend again. Season with salt and pepper to taste. Refrigerate until ready to use.

Blend the spice mix with the two cups of yogurt. Use half of the yogurt mixture as a marinade for the chicken. Marinate the chicken for at least 2 hours and up to 8.

Add the oil to a saute pan and heat over medium heat. Remove the chicken from the marinade and add to pan. Turn heat