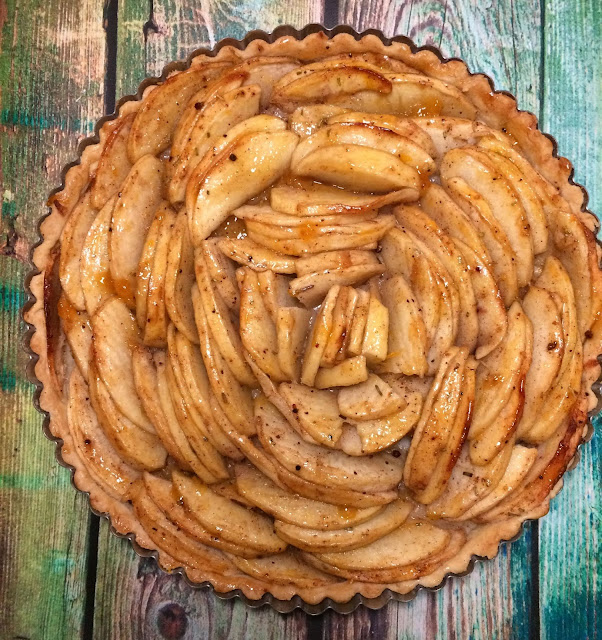 Fall is apple season, and all I want to do is bake them up in some delicious way. Like good old baked apples, for example, peeled and cored apples stuffed with butter, spices, and brown sugar and baked until tender. I like to serve them warm with a dollop of whipped cream, or--even better--a scoop of salted caramel ice cream. And whipped cream. Apple pies, too. Mr Minx made a fab apple galette a couple of weeks ago, mounding sliced apples seasoned with a little lemon juice into a pie crust brushed with apricot jam and baking it until golden brown.

I normally only season apples with cinnamon, but when Raw Spice Bar sent me a selection of their freshly ground spice mixtures to try, I found myself using a far more exotic blend on my fall apple creations. Their Apple Pie Spices contain not only cinnamon, but also nutmeg, allspice, ginger, green cardamom, star anise, grains of paradise, and rosemary. Yeah, those last four are pretty out of the ordinary for apple pie, especially the grains of paradise. It's an African pepper that while not as spicy as the usual black peppercorns, still has a kick. Somehow, though, the disparate spices all work pretty harmoniously with apples. I'm thinking this blend would work well with other fall-ish creations, too, like pumpkin pie or bread and in oatmeal cookies.

Rather than a typical two-crust apple pie, I decided to try my sample of Raw Spice Bar spices in an open-faced apple tart. I used a removable-bottom tart pan that doesn't get nearly enough love, and a grand total of five ingredients. (If you want to make your own pie crust, that will add a few ingredients to the list, but not many.) the result was pretty darn good, if I do say so. And pretty, in a rustic sort of way (I am not a perfectionist).

Raw Spice Bar has several interesting spice blends, along with individual spices. I think I want to try the Ethiopian Berbere, Persian Advieh, and their salt-free chili powder when I place an order, also the Bourbon-smoked New Mexico smoked paprika, and the Hatch and Urfa Biber chiles. Their spices are sold in small portions so they're always fresh, and their subscription service means you will get a new fresh batch on a regular basis. Check them out.

In the meantime, here's the apple tart recipe. Enjoy! 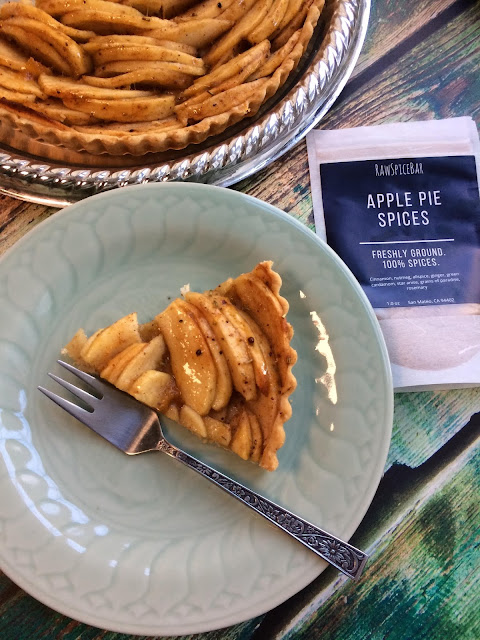 Unroll pie crust into a 9" tart pan with removable bottom. Carefully press crust into all of the pan's nooks and crannies and trim the excess dough at the top. Refrigerate the crust for 15 to firm up.

Peel and core the apples. Cut each into quarters and cut the quarters into 6-8 slices. Toss the apple with the sugar and spices.

Remove the crust from the fridge. Starting from the outside and working in, arrange the apple slices--curved side up--in concentric circles. Don't worry if it's not neat or perfect. Once you have filled in the entire tart, take some of the remaining slices (you will have plenty) and insert them in between the pieces already in the pan. If there are leftovers, eat them.

Bake the tart for 15 minutes at 400°F, then turn the temperature down to 350°F and bake an additional 25 minutes. Remove the pan from the oven and place on a cooling rack.

Melt the jam in the microwave for a few seconds, then use a pastry brush to top the tart with a thin layer.

Allow to cool completely before slicing. Remove the sides of the pan to make slicing easier. If you want, you can also slide the tart off the pan bottom, but I always leave it on. It makes life easier.