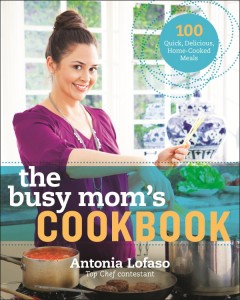 Antonia LoFaso was thisclose to winning Top Chef season 4, and did extremely well again on Top Chef All Stars. Now, she's writing cookbooks. Her first is The Busy Mom's Cookbook: 100 Recipes for Quick, Delicious, Home-Cooked Meals. I got a review copy to read, and I must say...I wasn't quite getting it at first.

When I think of a busy mom, I think of a person who is too busy to cook a hot home-cooked meal because there's so little time between running kids to school and softball and ballet and whatever. Of course, I'm not a mom at all, busy or not, but I can tell you that on most nights, the last thing I want to do when I get home from work is to make dinner. Flipping through this book, I see recipes for homemade ricotta and other stuff that takes far longer than the thirty to sixty minutes that some people are willing to put toward preparing a week-night dinner.

But then I got to thinking. Antonia is a working mother herself - one who cooks all day long. If these recipes are ok with her, who am I to judge?

Mr Minx and I decided to put her recipe for spaghetti and meatballs to the test. It was fairly easy and pretty tasty (but probably won't replace our usual recipe). 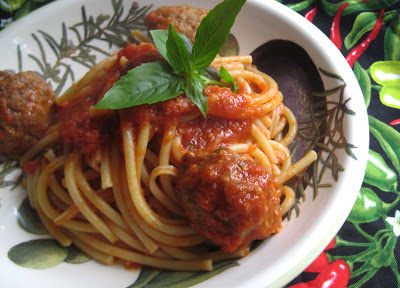 The sauce is a simple affair of canned whole tomatoes (San Marzano, please), olive oil, and garlic. An Emerilesque amount of garlic - eight cloves each in the sauce and the meatballs. In both cases, the garlic is cooked quite a bit so it doesn't overpower. Honestly, I don't mind a little raw garlic now and again and think the meatballs would be better with two cloves of raw garlic rather than the eight cloves of lightly sauteed garlic, but that's just my personal preference. I also think a full cup of heavy cream in the meatballs is overkill. Not that it makes the meat mixture sloppy - surprisingly, it did not. But meatballs don't need cream - and neither do your children.

In other words, don't go thinking that this book is full of low-calorie, vegetable-laden, 30-minute meals. The title is misleading. This cookbook is for anyone who likes to cook and likes to eat, and hopefully has children who feel the same way.

All Top Chef is giving away one copy of the book, so if you're interested, head on over there and leave a comment on that post.