The restaurants at the Avenue at White Marsh don't seem to change very much, except for the one across from Red Brick Station. That space most recently housed The Tilted Kilt; before that, Bayou Blues Cafe. Now it's a Bar Louie. This nationwide chain specializes in the kind of food that seems to make Americans the happiest: burgers and other sandwiches; flatbreads; Mexican-inspired items like tacos and nachos; plus salads, pasta, and booze. It's one of those places that, if you're among a group of people who all want different things, can make everyone happy.

Before the restaurant opened to the general public, Mr Minx and I were invited in to taste the menu, on them. Having been to the Bar Louie in Hunt Valley a couple of times, we knew what the restaurant was all about. Normally a loud and boisterous venue, it was nice to be able to dine there while it was still uncrowded and somewhat quiet, though the "friends and family" guests were already starting to have a good time at the very early hour of 4pm. It was happy hour, after all.

We started off with cocktails, two of the restaurant's signature martinis. Mr Minx had the cucumber-forward Effen Good, made with Effen cucumber vodka, mint, lime juice, and agave nectar. I had the Tea Ketel, with Ketel One vodka, Earl Grey and honey syrup, lemon juice, Fee Brothers orange bitters, and La Marca Prosecco. Both were good, made with quality ingredients (and a steal at $5.50 during Happy Hour), though I preferred his drink to mine. I felt the fizz of the prosecco to be unnecessary and somewhat disconcerting in a martini.

We started off with a couple of apps, labeled "bar bites" on the menu. The flash-fried calamari with spicy pickled peppers and a charred lemon to squeeze over were served with a dip of aioli rather than the usual (and tired) marinara. There was a generous amount of tender tentacles, and we were happy with the dish overall. 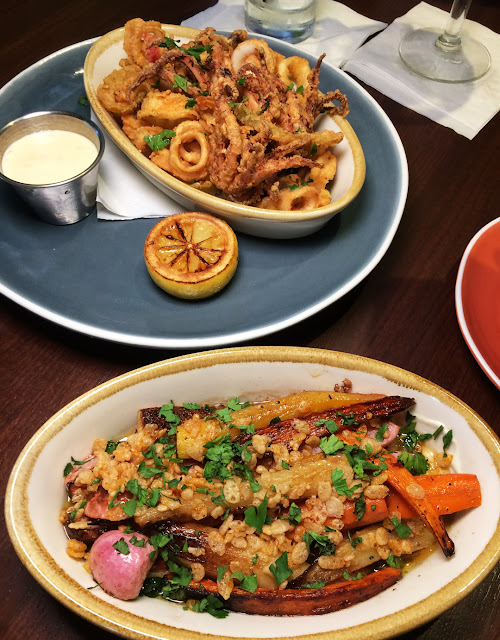 What really turned me on was a dish called "roasted roots," namely carrots and radish, in an Angry Orchard cider glaze with warm whipped goat cheese and spiced Rice Krispies. Honestly, it was pretty shocking to see a dish of roasted carrots on the menu. Vegetables that are not brussels sprouts are rare as hen's teeth in chain restaurants, and I have to wonder how long these will be on the menu. (There is also the trendy roasted cauliflower!) The menu at the White Marsh Bar Louie is a test menu, btw, that they are hoping to roll out to the other restaurants at some point in the future. You'll find things here that aren't at other locations, and vice versa. Like those carrots, which despite the cider glaze, were not at all sweet. The radishes--a highly underutilized vegetable that is far more delicious cooked than it is raw--were a nice earthy touch. Carrot freak that I am, I would order this again. 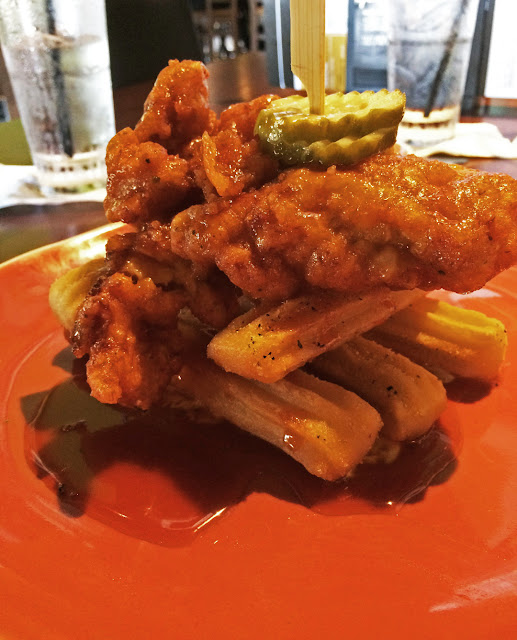 I wasn't as thrilled with the chicken and churros. While perfectly Instagrammable, the textures were a bit disappointing. The boneless white meat chicken was juicy and perfectly cooked, but the coating quickly grew soggy under the buffalo maple glaze. The savory churros were a little tough. The flavors, though, were fine. 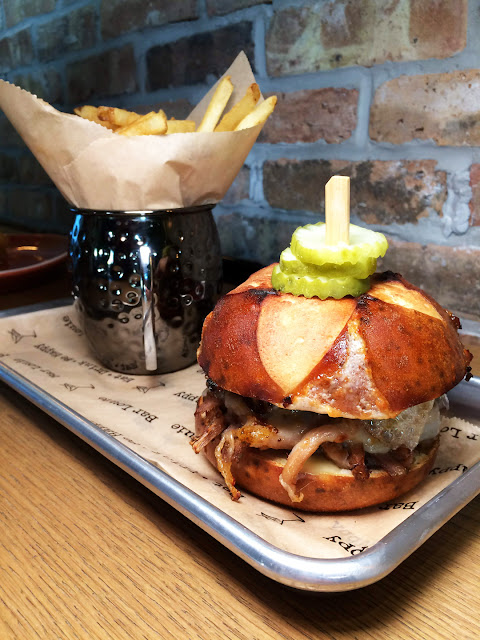 Mr Minx's sandwich, however, the "BBQ Pork & More," was the highlight of the meal. A crispy and sturdy (but not hard) pretzel bun stood up to its filling of moist chunks of pork in a bbq sauce topped with bacon onion jam, white cheddar, crispy pork rinds, and aioli. It was sweet (but not too), juicy, porky, and delicious, and surprisingly not at all messy. The accompanying fries were pretty good, too. 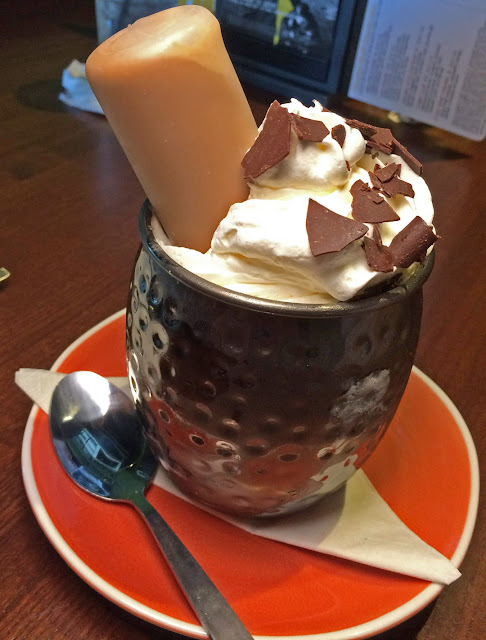 There are only two desserts on the menu, churros with bourbon-spiked maple dulce de leche (or a non-alcoholic double chocolate sauce), and an ice cream sundae of sorts. Having already had enough of the churros, we decided to split the sundae. We had a choice of a squeeze bottle of Bailey's espresso liqueur, or boring non-alcoholic espresso cream sauce; we chose the former. After applying the sauce to the vanilla ice cream, the effect was somewhat like a chilled, boozy, affogado (espresso over ice cream).

As I mentioned earlier, we'd been to the Hunt Valley Bar Louie a couple of times. In fact, I had a blog post started quite a while ago, but never got around to finishing it. This seems like as good a time as any, as some of the things we ate are still on the Hunt Valley menu and will likely remain there until the future new menu rollout. 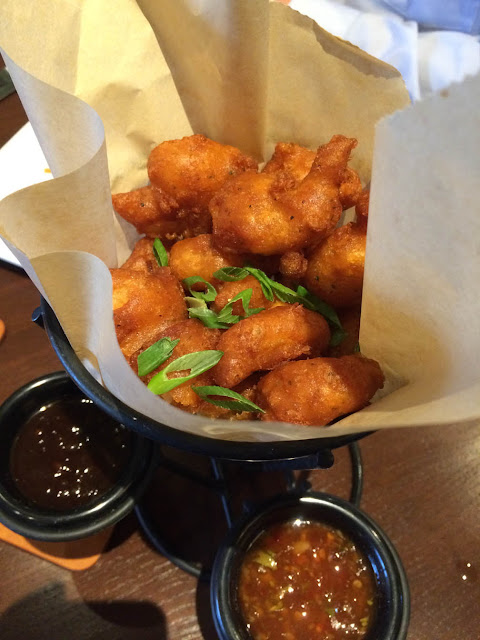 I am a sucker for most Asian-flavored items, so we had to try the tempura shrimp. Tempura was a bit of a misnomer, as the batter on the shellfish was more akin to a beer batter in texture. It came with three sauces, Szechwan (sic), Thai chili lime, and buffalo. 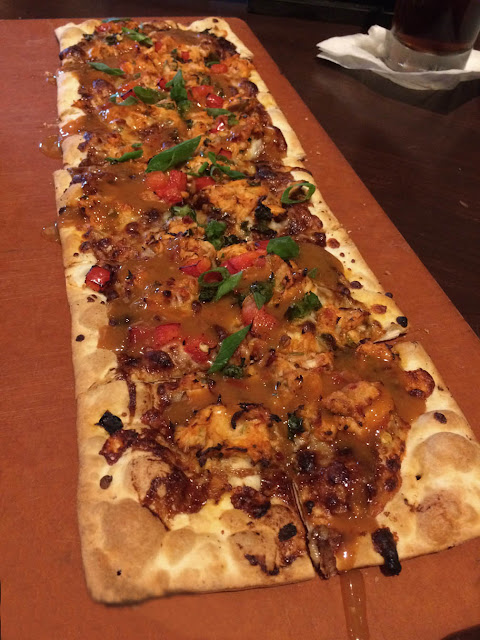 We also had a straightforward beer-battered cod and fries with tartar sauce... 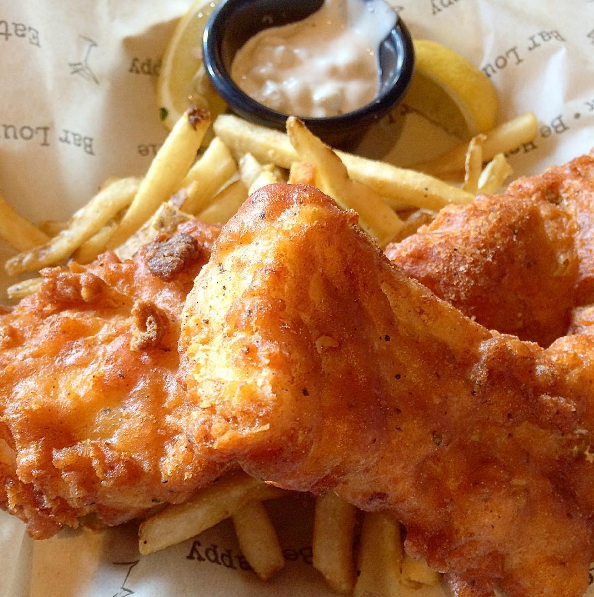 ...and beef brisket sliders (sliced beef brisket, peach moonshine barbecue sauce, pickles, topped with grilled pear slaw) that were served with fries. Though I didn't taste the moonshine, the menu states that diners "must be 21" to order them, so I guess they use a goodly amount. 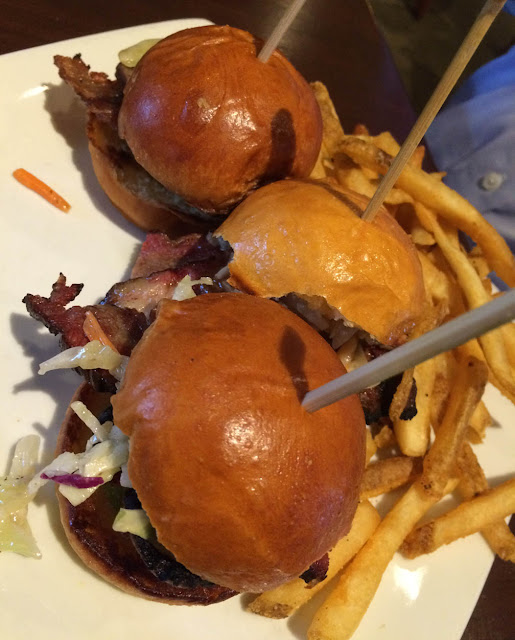 Everything we tried those on those prior visits was satisfying, particularly the flat bread (because peanut sauce). As I said before, if you want tacos and your friends want pizza and burgers, Bar Louie can make everyone happy.