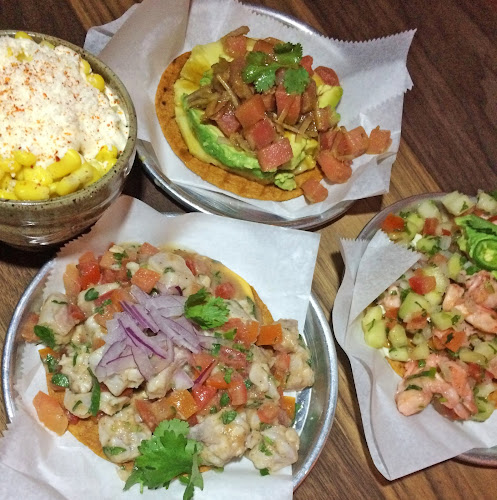 Clavel calls itself a mezcaleria, and yes, there are a vast number of mezcals on the drink menu available as single or double shots and in flights, but I'm in it for the tacos and ceviche. I do like a shot of mezcal now and again, don't get me wrong, but I have always found food to be far more interesting than booze, so I'm not even going to get into the alcohol at Clavel. We've tried a few of the cocktails, which are complex and interesting, but I can't really speak about them with any real authority so I'm not going to try.

What I can talk about, however, is the eats.

The food menu at Clavel isn't huge. There are five ceviches, two soups, quesadillas, tortas (sandwiches), and a selection of tacos. All three of the ceviches I've tried--shrimp, tuna, and rockfish--were lovely, with super-fresh seafood "cooked" until firm with lots of lime juice and complementary flavorings (pineapple with the tuna; tomato, cucumber, and avocado with the shrimp; a sweet potato mayo with the rockfish). They were served atop tostadas that had a toastier flavor and crisper texture than those I've eaten in the past. We ordered the small size, which was perfect for three of us to share. More people can try more types of ceviche, or order the larger size, which comes with chips for sharing.

We also tried the flavorful esquites, corn layered with mayo, crema, butter, cheese, lime juice, and chiles. The tender-crisp corn kernels were the main focus of the dish, which was not as insanely fatty as it sounds. 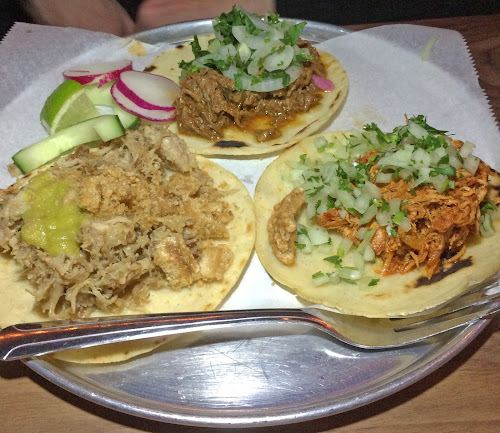 Then we had tacos, all of which were more-ish. My favorites were the cochinita pibil, shredded pork cooked in a tangy mixture of bitter orange and achiote, and the carnitas. Carnitas are chunks of pork cooked in its own lard (so how can that ever be anything less than amazing?), making them super tender. Clavel mixes in bits of crisp chicharrones (pork skin) and tops it with a bit of warm salsa verde. My mouth is watering just thinking about it. 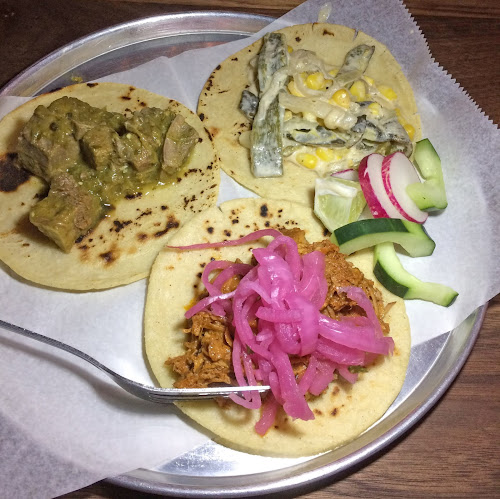 We've also tried the huitlacoche (a fungus that grows on corn), the rajas vegetarianas (strips of poblano chile with corn and crema), the lengua (cubed beef tongue in salsa verde), spicy chicken tinga, beef and pork barbacoa, and the coffee-tinged lamb barbacoa, all of which were tender, juicy, and flavorful. There are a trio of spicy sauces on the table, as well as pickled red onion, but I didn't find that any of the tacos needed additional garnishes. You might want more heat, but I didn't.

Three tacos and a small ceviche each made for a pretty filling meal because of all the protein. That doesn't mean we didn't briefly contemplate ordering more tacos, as there are still a few (including seafood) that we haven't yet tried. Next time.

Clavel is quite popular and there was already a line at the door just before they opened at 5pm. On a Tuesday. Thankfully, they've opened another dining room, but the place still got very full very fast. Be prepared to wait if you're not an early bird diner like we are. Totally worth it though.