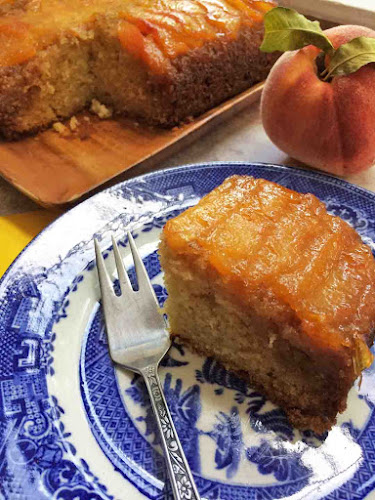 One of Baltimore's old-fashioned bakery specialties is a yeast-raised cake topped with sliced peaches. My Mom would buy slabs of peach cake often in the summer months; she and Grandma seemed to enjoy it quite a bit. I, on the other hand, was not a fan. The cake was too bread-like and the moist peaches created a slime-like ooze that coated the top of the bread. Bleh. But I had extra peaches and Mr Minx wasn't interested in peach pie. I briefly considered making a peach tart tatin when I recalled an image I had seen on Instagram earlier in the week. Peach upside-down cake.

I used a no-fuss recipe for pineapple upside-down cake that I had made a few times in the past, I just swapped peaches for the pineapples, skipped the maraschinos, and used brown sugar in place of the toffee chips. A little cinnamon sprinkled over the peaches added a little sweet spice.

It's terrific for dessert, or with coffee for breakfast or a snack.

Position an oven rack in the center of the oven and preheat it to 350°F.

Peel the peaches, cut in half, and remove the pit. Cut each half into thin slices and set aside.

Melt the 4 tablespoons of sliced butter and pour into in a 9" square pan. Sprinkle the brown sugar over the butter evenly. Overlap the peach slices in straight rows (three should fit nicely) and sprinkle with a bit of cinnamon. If there is any peach left over, chop it up and set aside.

In a medium bowl, whisk together the flour, baking powder, baking soda, and salt. In a large bowl, beat the sugar and 8 tablespoons of room temperature butter with an electric mixer set to high speed until light and fluffy, about 3 minutes. One at a time, beat in the eggs, followed by the vanilla, scraping down the sides of the bowl as needed. With the mixer on low speed, add the flour mixture in thirds, alternating with the yogurt in 2 equal additions, mixing until just smooth after each addition and scraping down the bowl as needed. Do not overmix. Stir in the chopped peach, if there is any. Spread the batter evenly over the peaches in the pan.

Bake until the top is golden brown and a wooden toothpick inserted in the center of the cake comes out clean, about 40 minutes. Let cool in the pan for 5 minutes. Run a dinner knife around the inside of the skillet to loosen the cake. Place a serving plate over the skillet, and, using pot holders, invert the skillet and plate together to unmold the cake. Serve at room temperature.