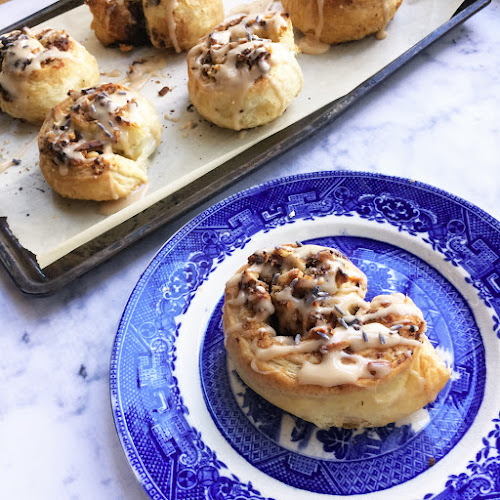 Sometime before Christmas, I received a package of samples from Davidson's Organics. Though I had never heard of them, Davidson's has been around for 40 years already. Goes to show what I know, huh? Davidson's specializes in tea, every type, from black to green to herbal, both loose leaf and bagged. Lots of fun blends like jasmine almond with orange and tulsi red vanilla. I love tea, both to drink and to cook with, so I was especially excited to receive two of their specialty tea products, jelly and chocolate, both made with Earl Grey tea. 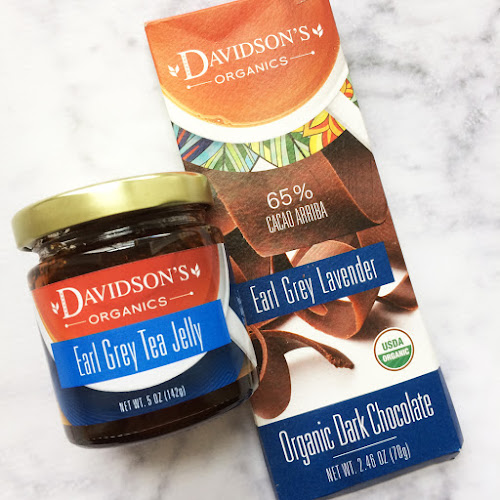 I sat on them for a while, trying to think of what to concoct. They also sent some holiday tea bags, so I sipped tea and thought on the matter. Then it came to me. I'd make cinnamon rolls.

Yes, I know cinnamon rolls are not the first thing one thinks of when contemplating both chocolate and tea jelly, but stay with me here. The chocolate, which is flavored with both Earl Grey tea and lavender, would go into the filling, and the jelly would be part of the glaze. And I just happened to have some puff pastry in the freezer. And yes, I do know that cinnamon rolls and sticky buns are made with an enriched yeast dough, not puff pastry, I also knew that puff pastry would work just fine and it would be much much faster. 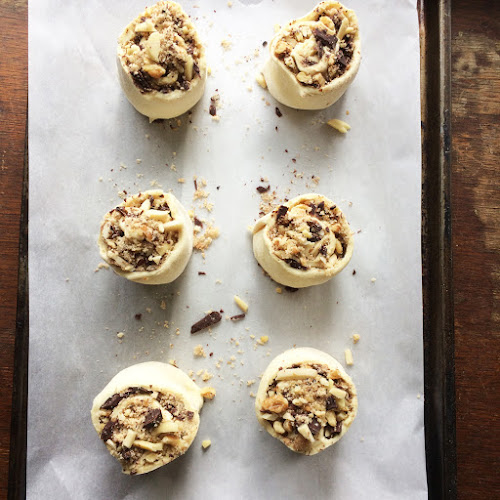 The texture of the pastry, after baking, reminded me of the creme horns my Mom liked - flaky and crisp. The chocolate didn't melt much, so there were still nice crunchy bits of both the choc and the nuts inside. I liked the combination a lot. And the icing, made with the jelly, powdered sugar, and a bit of lemon, added another dimension of flavor, and not just another layer of sweet.

Grate the chocolate and set aside.

Defrost the pastry according to package directions. Unfold sheet and go over it with a rolling pin to smooth out the creases and to enlarge the square by about 1/2 to 3/4 inch both in height and width.

Sprinkle the pastry with a thin layer of brown sugar, then shake on some cinnamon (but not too much). Add a layer of the chocolate and another of the nuts. Roll the pastry into a log, being careful not to lose too much of the filling in the process. Cut the roll in half, then cut each half into three pieces. Place pieces open-side-up on a parchment-lined baking sheet.

Bake for 20 minutes until browned and puffed. Set aside to cool.

Make the icing by microwaving the jelly until liquid, about 1 minute. Stir in enough powdered sugar to make a runny glaze. Flavor with a bit of the lemon juice.

When the buns are cool, drizzle with icing. Makes 6.