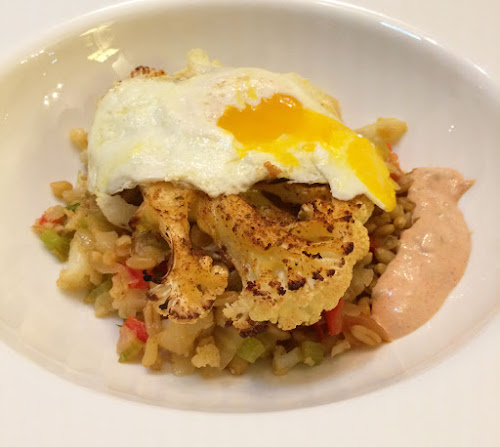 People do all kinds of weird shit with cauliflower these days, like make "rice" out of it and pizza crusts. Folks are so damn afraid of carbs, it makes me laugh. And maybe fake rice and fake pizza crusts made with cruciferous veg are tasty, but I think cauliflower is pretty yummy in its natural state. One thing I've seen and liked the idea of is cauliflower "steaks." Of course they're not really steaks, nor are they meant to simulate meat. They're just cut from stem to top in large flat slices, making a wide, uneven plank-like piece of vegetable matter. "Steak" sounds more appetizing than "plank," doesn't it? I thought maybe I'd make some "steaks" and put blackening seasoning on them.

I had recently received a package from The Spice Lab, a woman-owned company that was showing their wares at the recent Winter Fancy Food Show. I wasn't able to attend, so they were nice enough to pack up a couple of different seasonings and send them my way. I got a huge shaker bottle of their blackening seasoning and some of their steak seasoning, too. After tasting both, I thought the blackening one would work better on the cauliflower.

The technique of "blackening" foods, particularly fish, was popularized by famed Louisiana chef Paul Prudhomme in the 80s. While it's no longer trendy, one does see blackened things on restaurant menus even today. Since I associate that flavor profile with Cajun/Creole food, I thought I'd toss a few more of their cooking staples into the meal, namely trinity (celery, bell pepper, and onion) and remoulade. I also ended up putting an egg on top because the cauliflower I had was pretty small, and it didn't seem like enough food. Plus, who doesn't like a runny egg on their dinner?

For the cauliflower:
1 large cauliflower with a fat stem
Olive oil
The Spice Lab Blackening Seasoning

To make the cauliflower: Preheat the oven to 400°F.

Remove the green leaves from the cauliflower and trim the stem flat. Turn the cauli so the stem is facing upward. Carefully slice down through the center of the stem all the way to the opposite end of the head to make two halves. You should be able to slice each half again in the same way to form at least two fairly similar steaks. If the stem is particularly fat, you  might be able to squeeze another one out of each half, although they won't be as large overall.

Place the steaks on a foil-lined baking sheet. Brush both sides with olive oil. Sprinkle a heavy coating of the blackening seasoning on the top side. Roast for 20-25 minutes, until the point of a knife inserted into the stem goes in with relatively little effort. Don't over roast, however - you don't want mushy cauliflower.

To make the hash: Chop any remaining cauliflower into small pieces. Saute the bell pepper, celery, and onion in a bit of olive oil until tender. Add the chopped cauliflower. Cook until the cauliflower is tender. Season with salt and pepper to taste.

To make the remoulade: Combine all ingredients in a bowl. Taste for seasoning and add salt, if needed.

To serve: Fry eggs in butter to your liking (we like over-easy). Place some of the hash in a bowl, top with a cauliflower steak and a fried egg. Serve remoulade on the side.