Iron Rooster All Day (and All Evening)

The Iron Rooster in the Hunt Valley Towne Center is the newest link in the Maryland-based mini-chain (the others are in Annapolis and Canton). We haven't been to the other locations, but we've been hearing great things from people who have.

While Iron Rooster isn't a diner, they're all about the comfort food, and for many of us, that involves things like pancakes and scrambled eggs, not to mention biscuits and bacon. And scrapple. Who doesn't like breakfast all day? When we got an invite to a media dinner at Hunt Valley, we were more than happy to attend. Our mantra has been "yay for locally-owned restaurants in northern Baltimore County!" and we've enjoyed repeating it on a more-regular basis in recent months.

A few moments after arriving at the restaurant and finding our party, we were asked about drinks. Not having a drink menu handy we defaulted to ordering draft beers, but I would have liked to try the Sriracharita, a signature drink. Next time. Drinks in hand, we explored the buffet provided to our group--after taking photos, of course. 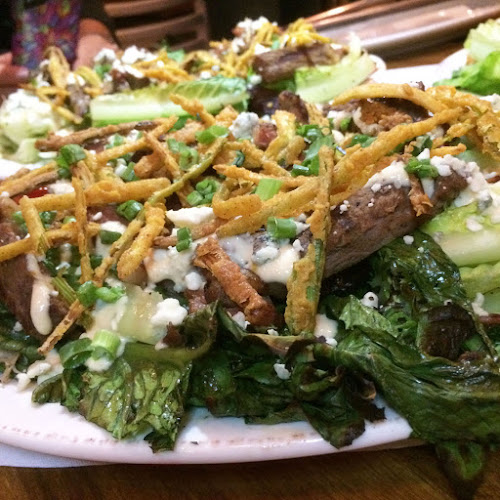 We tasted samples from the supper menu, including the Iron Head Steak Salad. I am a fan of grilled romaine; the smokiness brings another layer of interest to a salad already packed with flavor. The crispy fried leeks and garlic aioli led the tasty charge, followed by the bleu cheese. Slices of strip steak and nuggets of fried pork belly "croutons" provided meaty umami. 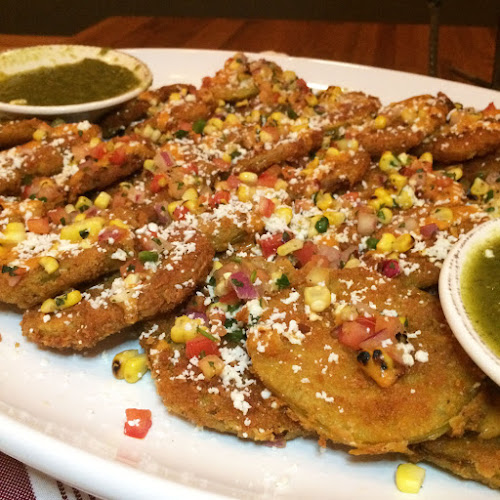 Iron Rooster's Fried Green Caprese is a very loose translation of the classic salad of ripe tomato, basil, and Mozzarella cheese. The tomatoes are fried and green, the cheese is queso fresco, and instead of tomato slices there's a roasted corn salsa. A sprightly poblano pepper sauce and a chipotle aioli add a bit of moisture and heat, but the tomatoes were good on their own. 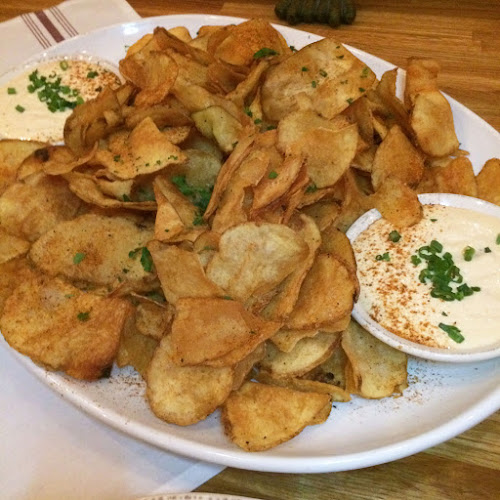 We also tasted the house-made kettle chips, which were crisp and perfectly browned. They're an accompaniment to all of the non-burger sandwich items on the menu, and a nice alternative to fries. (Burgers do come with fries, which is the natural order of things.) The chips with accompanying aioli can also be ordered as a side dish. 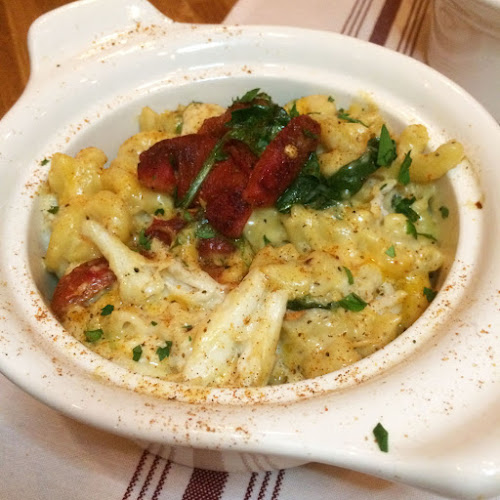 The Crabby Mac is an indulgent blend of mac and cheese with crab and Old Bay; spinach and red peppers break up the richness. Good call on the veg, which can also allow diners to fool themselves into thinking they're eating something healthy. 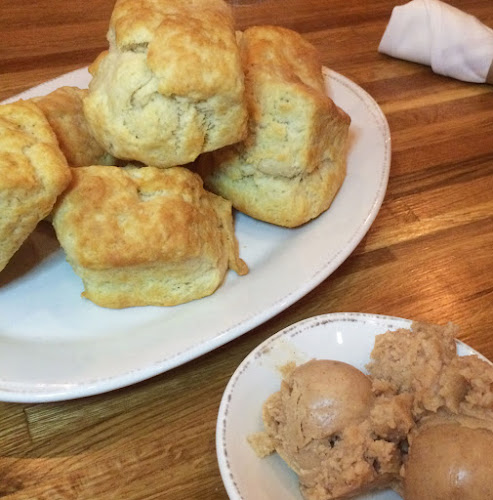 We also tasted Iron Rooster's biscuits. Oh myyyyy, they were good. Fluffy, moist, rich yet light. Perfection. And even better with a schmear of spiced maple bourbon butter (which was good enough to eat with a spoon). The butter regularly comes with their pancakes, French toast, and Belgian waffles, so you can enjoy it even if you're not scarfing down a plate of biscuits. (But why wouldn't you order a plate of biscuits? They are SO GOOD.)

The final savory dish was buttermilk marinated fried chicken on cornmeal waffles with black pepper pan gravy and maple syrup. What can seem like an odd combination really makes sense here. The chicken is well-seasoned and crisp, and the waffle is tender but not soggy. The gravy and syrup bring it all together. 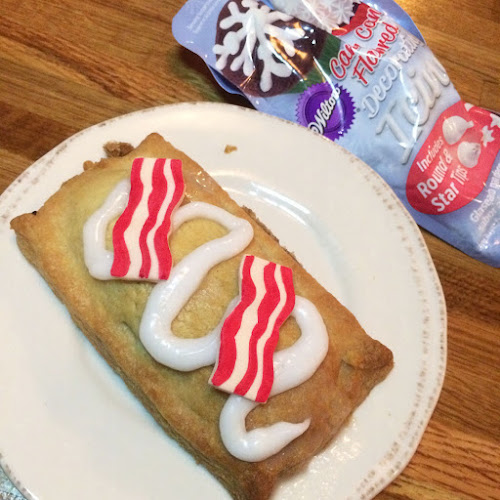 For dessert, we had Iron Rooster's famous pop tarts in both brown sugar and berry flavors. We tried one of each, and really enjoyed them. In fact, they probably stuck in Mr Minx's mind the most, as the next day he mused that he would like to have them on a regular basis. They're served plain at the restaurant, but we fancy media types were presented with the opportunity to gussy up our pastries with frosting and bacon-shaped sugar do-dads. But these tasty treats certainly don't need any such fussy toppings.

If you haven't been to any of the Iron Rooster locations for one reason or another and you live in northern Baltimore County, definitely try out the Hunt Valley outpost. Honestly, I've been thinking about those biscuits frequently in the three weeks since that media dinner, and now that the holiday hubbub is finally over, am planning to get back there on a regular basis. The menu is pretty big, and I'm looking forward to trying other things. But always getting the biscuits.