The French Kitchen at the Lord Baltimore Hotel

A few years back, the restaurant at the Lord Baltimore Hotel hired a French chef and named their restaurant The French Kitchen. The French chef is gone, but there's still a wire-framed replica of the Eiffel Tower in the dining room and a few French touches on the menu. Recently, the Minx and I were invited to a media dinner to try out some of The French Kitchen's latest offerings. 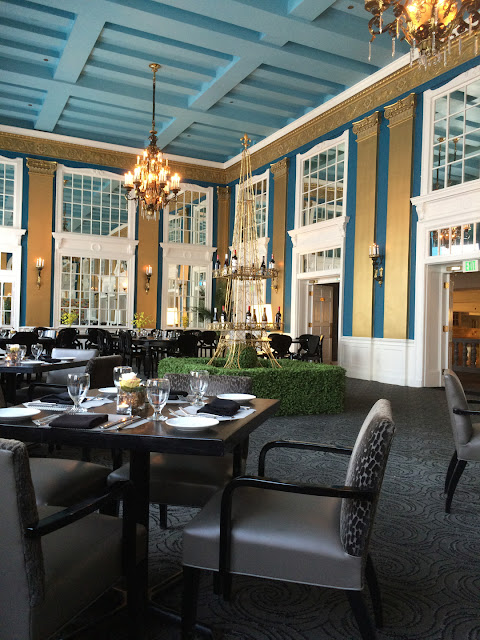 Of course, we had to start off with a cocktail or three. We were intrigued by the custom cocktail called the Lavender Martini. It consists of Hendricks gin, St. Germaine, lavender simple syrup, and a twist of lemon peel. The gin is hardly noticeable (which is a good thing to me) and the elderflower liqueur and lavender syrup provide a floral, almost perfume-y punch, brightened by the oil of the lemon peel. Quite refreshing for summer. 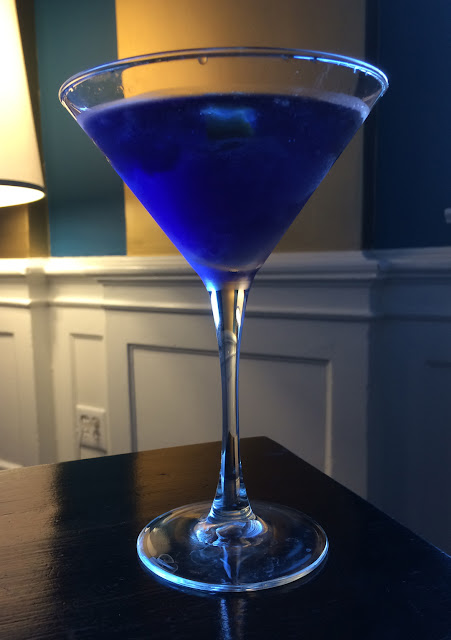 Our first course was an "amuse-bouche" of fried green tomatoes. I put the designation in quotes because it was more than one bite and could be classified as a small plate item. Nevertheless, it was delicious. Expecting a crumbed preparation, I was surprised by the crunchy beer batter coating on the tomato slices. This fried goodness was complemented by a spicy remoulade and shreds of smoky country ham. A sprinkling of corn and bell pepper added another textural element while soothing my conscience with the notion that this could be considered a healthy dish. 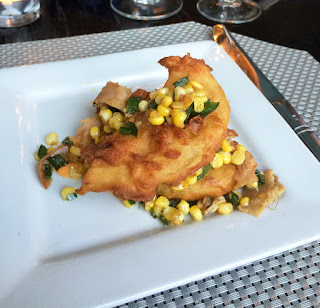 For appetizers, the Minx selected the pork belly while I opted for the shrimp and corn chowder. The thick slice of tender pork belly was well-seared and topped with plumped dried cherries. It was served with a slaw of jicama, apple, carrots, and cabbage, dressed with the distinct flavors of champagne vinegar and cardamom. My shrimp and corn chowder was rich and redolent of corn. Bits of carrot and celery swam with the tasty shrimp. 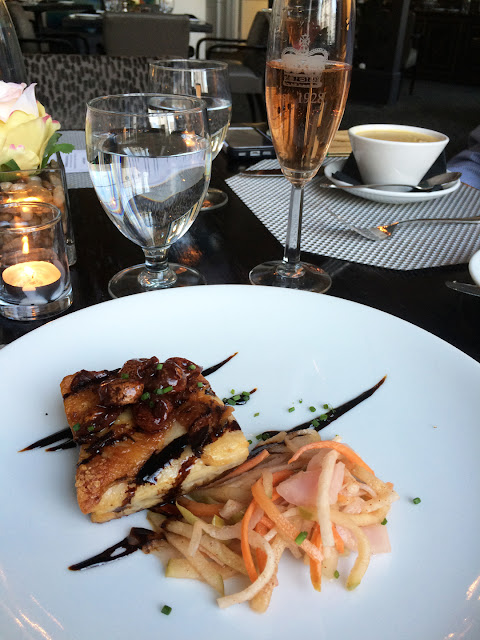 Our entree selections betrayed our Maryland roots as I ordered the crab cakes and the Minx ordered the rockfish. The horseradish-crusted wild rockfish was partnered with broiled tomatoes somewhat reminiscent of the stewed variety, a old-fashioned favorite of the Minx. Along with the "wilted heritage greens" (which sure tasted like romaine lettuce to her) and Dijon sauce, she felt that it could pass as a French riff on an Eastern Shore dinner. 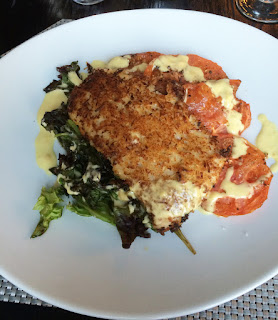 At the urging of our waitress, I chose the crab cakes. She told us they were made with Maryland blue crab and were so popular that people came in from out of town just to eat them. Having the local meat makes a huge difference in flavor, and the cakes were mildly seasoned to allow it to shine through. However, the Minx felt they had a bit too much filler. The accompanying melange of fava beans, corn, red bell pepper, and asparagus was a pleasant addition. 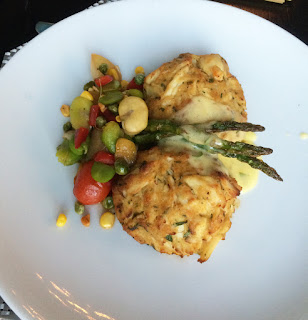 The dessert offerings were probably the most French aspect of our meal, or at least my profiteroles were. The dainty puffs of choux pastry were filled with icy cold vanilla gelato, served with a rich chocolate fudge sauce, and made for a decadent finale to the meal. 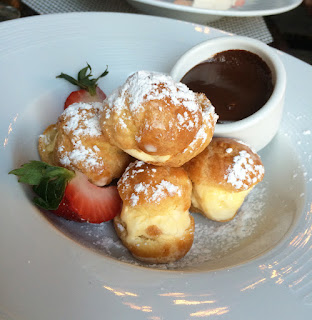 The Minx's pavlova had chunks of meringue surfing on a bed of berries, fruit, and lemon curd. The bright fruit flavors made for a very summery dish and the meringue tasted slightly of almonds. 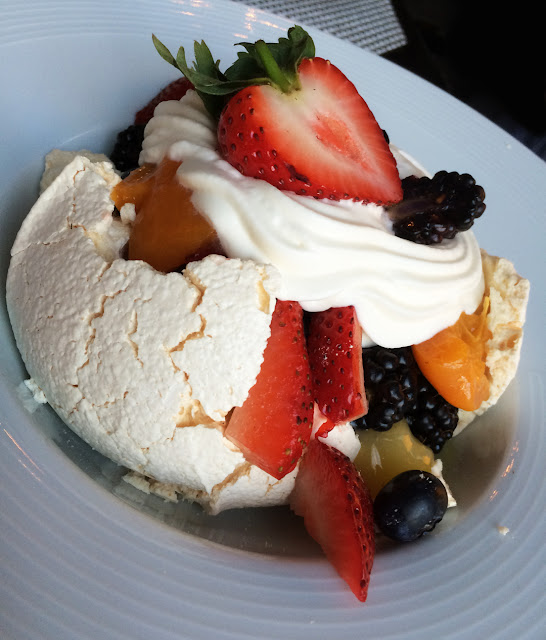 The French Kitchen may be leaning more toward New American cuisine than the Continental influences implied by its namesake, but the dishes are quite sophisticated and satisfying. You might also want to check out the breathtaking view from the hotel's LB Skybar on the 19th floor before or after your meal.