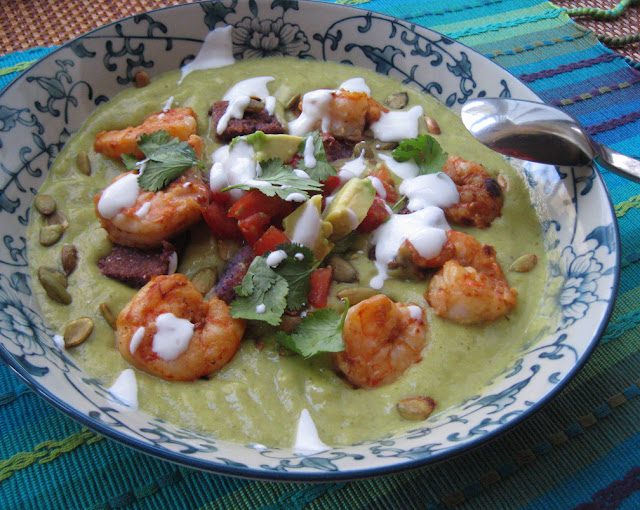 I've gotten super lazy, as far as cooking is concerned. I haven't been particularly inspired to concoct anything new, and have been happy to eat whatever I could throw together from stuff already on hand. And we've been eating restaurant meals quite a bit. Then came a weekend in which we had no plans following a week in which we ate out four times. I had no excuses not to whip up something tasty and satisfying, else be labeled a fraud as a food blogger. (Who ever heard of a food blogger who doesn't want to cook?)

On the way home from work, I stopped at the grocery store to pick up a few things. I knew we had two ripe avocados at home to work with and went from there. Rather than simply make my typical cop-out, guacamole, I thought I'd do something soup-like. I've been trying to avoid wheat, so for texture (and carbs...Mr Minx must have his carbs) I made some polenta croutons with blue cornmeal that had been sitting in our pantry, neglected. More texture came from crunchy toasted pumpkin seeds, and shrimp were added for protein. The result was colorful and tasty, and I was very very pleased.

Thinking back on my concoction, I realized many of the ingredients were similar to those in the not-so-great meal I had at David Burke Fabrick in NY last year. Had I received there what I concocted in my own kitchen with my own hands, I might have looked more favorably upon the place.

To garnish:
Plain Greek yogurt thinned out with milk to a drizzle-able consistency
Cilantro
1 tomato, seeded and diced

For the soup: Add onion, a couple teaspoons of oil, and a pinch of salt to a medium saucepan. Cook over medium high heat, stirring regularly, until onion has wilted and is beginning to brown lightly at the edges, about 10 minutes. Add the tomatillos, garlic, cilantro, and chiles. Stir to combine and bring to a boil. Lower heat, cover pan, and cook until tomatillos break down, about 15 minutes. Remove from heat, pour into a container, and refrigerate until completely chilled.

When ready to serve, pour into a blender jar and add the flesh of 1 1/2 avocados. (Cut the other half into dice and season with lime juice and a pinch of salt. Set aside until ready to serve.) Puree the tomatillo avocado mixture, adding chicken stock as needed to make a consistency thinner than a puree, but not runny. Season with lime juice and salt. Pour into a covered container and refrigerate until ready to use.

For the croutons: Bring 2 cups of water to a boil in a medium pot. Add a big pinch of salt and the cornmeal. Stir constantly with a wooden spoon until cornmeal is incorporated--this should only take a minute or so. Turn down the heat, cover the pot, and let the cornmeal simmer for about 10 minutes. Check and stir frequently so the cornmeal doesn't burn or stick. Once all of the liquid has been absorbed and the cornmeal is rather thick, Add a few teaspoons of olive oil and stir vigorously until the cornmeal comes away from the side of the pan into a ball.

Oil a 8-inch square baking pan. Pour in the cornmeal (it will come out in one big blob) and smooth until it fills the pan evenly. Bash pan on the counter once or twice to help it out. Cover pan with plastic wrap and refrigerate until firm, about 3 hours.

Once cornmeal has firmed up, invert the pan over a cutting board and cut half the cornmeal into 1" cubes. (You won't need all the cornmeal for this recipe. Save the rest to fry up for breakfast the next day, served with maple syrup.)

Heat a bit of vegetable oil in a skillet. Add cornmeal squares and fry until browned on all sides. Drain on paper towel-lined plates.

For the shrimp: Put the garlic, adobo, soy, and olive oil in a zip-top bag. Add the shrimp. Seal the bag with as much air removed as possible, then mix the shrimp around with the marinade ingredients. Refrigerate until ready to use.

Once the soup and croutons are done, it's time to fry the shrimp. Heat up a large skillet and pour in the contents of the shrimp bag. Cook shrimp over medium-high heat, turning them once, until they are pink and opaque.

To serve: Arrange several croutons in a shallow soup bowl. Gently pour in some of the chilled soup. Top with a few shrimp. Combine the chopped tomato with the reserved chopped avocado and garnish the soup with it. Drizzle yogurt over all.