Not Quite Nashville Hot Chicken in a Biscuit 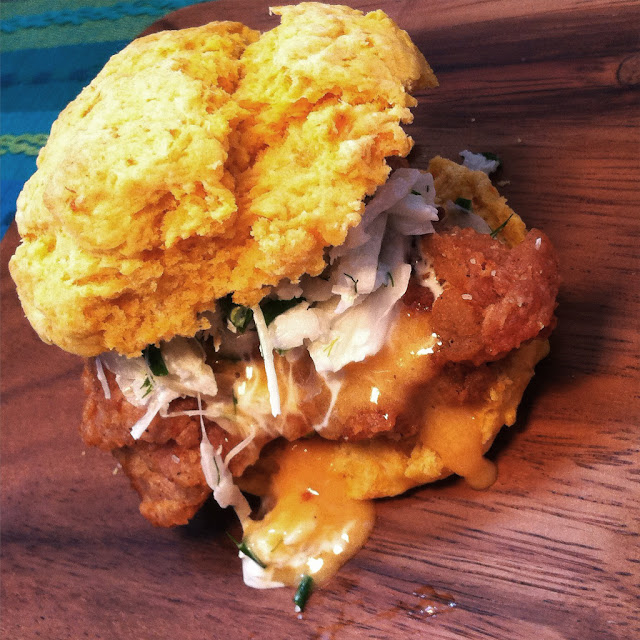 There's this thing called Hot Chicken that is popping up here and there, even in Baltimore (at least at KFC). This specialty of Nashville, Tennessee is typically marinated in spices, breaded, fried, and then coated in a cayenne-rich paste or oil. It's red in color and definitely hot.

Spicy hot food releases endorphins, feel-good chemicals that make us want more. At least, those who can tolerate heat. Some people are just crazy with the amount of capsaicin they are willing to ingest. Us, not so much. While we enjoy hot foods, we're not "chileheads" by any stretch of the imagination. So while I did spice up this fried chicken a bit, it's still quite enjoyable by all and sundry. If you are a chilehead, feel free to add more cayenne to the chicken coating and to the sauce. Hell, add it to the biscuit, if you want.

Really, though, this post is more about making dinner with what we had on hand rather than going along with a food fad. I've been really lazy recently, not thinking ahead about what we're going to eat when it's my turn to cook (the weekend). And when Saturday comes, I'm digging through the freezer, hoping we have some good raw materials to work with. Thankfully, we usually do. This time, we had packages of boneless skinless chicken thighs. We also had three sweet potatoes hanging around (Mr Minx doesn't like them particularly) and a bulb of fennel that I had purchased on impulse the week before. I've made hash before with those same ingredients (and it was pretty good) but I hate repeating myself. I thought I could hide one of the sweet potatoes in a batch of biscuits, and fried chicken seemed like a good thing to put in one of those biscuits. With slaw on top, using fennel rather than the typical cabbage.

I have a somewhat embarrassing confession to make: I was a fried chicken virgin until the middle of last year. Oh, I've eaten my fair share over the years, but I'd never cooked it before. I was afraid of making a greasy mess while stinking up the house and ending up with either burnt or raw chicken. Last year, we wrote a book about Maryland cuisine and including a version of Maryland fried chicken was a must. At long last, it was time to get over my fear of frying. I purchased a cast iron skillet.

Maryland fried chicken is shallow-fried, then steamed. It's just as crispy-coated and moistly delicious as deep-fried chicken, only it's not nearly as messy. Or smelly. Once I figured out the proper cooking times (a lot of published recipes don't allow nearly enough time for the coating to brown) and got the technique down, I felt like a chicken frying pro. It was easy, and results were delicious.

If you're a novice, try my recipe. If you don't want spicy chicken, just put some salt and pepper in the flour. Don't worry about buttermilk soaks or egg washes or anything else. Just seasoned flour, chicken, and hot oil. And a cast iron skillet.

Spicy Chicken Biscuit Sandwich with Fennel Slaw
BTW, I used to love those crackers, Chicken in a Biskit, even though they don't taste like chicken nor particularly like biscuits.

For the chicken:
6 boneless, skinless, chicken thighs, cut in half
1 cup flour
1 teaspoon salt
1 - 1 1/2 teaspoons ground black pepper
1/2 - 1 teaspoon cayenne
Fat for frying (lard or vegetable oil, or a combo of the two)

To make the biscuits: Peel the potato and cut into 1" chunks. Place in a pan and add water to cover. Bring to a boil over high heat, then turn down to a simmer. Cook for 10-15 minutes, until potatoes are tender. Drain pot and mash potatoes. Pack mashed potato into a measuring cup. You should have one cup of sweet potato. If you have more, eat the rest. Set aside to cool.

Once sweet potatoes are cool, add the 1/3 cup of half and half to them and stir to combine. Combine the 1 3/4 cups of flour, baking powder, and salt in a bowl, stirring well with a fork. Add the butter and combine with your fingers, a pastry blender, or two knives, until mixture resembles coarse meal. Gently fold in the sweet potato, adding a dribble more half and half if the dough seems too stiff, a pinch more flour if it seems too wet.

Flour your hands well and grab small handfuls of the dough. Gently roll into a ball, then flatten into a fat disc. Place discs on a parchment-lined baking sheet--touching if you want soft sides, not touching if you like crispier biscuits. You should be able to get between 9 and 12 biscuits, depending on how big you make them. Brush tops with a little melted butter. Place in preheated oven and bake for 12-18 minutes (depending on how many you made; bigger biscuits need more time), until light golden brown and firm to the touch. Remove biscuits to a wire rack until ready to serve.

To make slaw: You can do this while the sweet potato is boiling. Cut stalks off of bulb, retaining some of the fronds. Rinse well and cut off any discolored bits on the outermost layer. Cut the bulb in half and make a triangular cut at the bottom to cut away the core. Grate the fennel with a hand grater or a food processor. Remove fennel to a large bowl; chop the fronds and add to the rest of the fennel. Add the chives.

In another bowl, combine the mayo, rice wine, and agave syrup or sugar (more or less depending on how sweet you like your slaw). Season with salt and white pepper to taste. Cover and refrigerate until ready to use.

To make chicken: Combine flour with salt and peppers in a plastic zip-top bag. Place the chicken pieces in the bag, one at a time, and shake to coat with flour. Place coated chicken on a plate to rest.

Heat 1/4-inch of fat in a large, heavy-bottomed, frying pan (a cast iron skillet is ideal) over medium-high heat. Put the chicken pieces in the hot fat and cook for about five minutes without disturbing them, until crusty and browned on the bottoms; turn each piece and cook for an additional 5 minutes. Turn the chicken over again, cover the pan partway, turn the heat down to medium, and allow the chicken to steam for 8-10 minutes. A meat thermometer stuck into the meatiest part of the chicken should read no less than 165°F. Remove the cover and cook an additional couple minutes on both sides if it hasn’t browned to your liking.

Drain chicken on paper towel-lined plates. Salt and pepper pieces as soon as they come out of the pan.

To make sauce: combine all ingredients in a small bowl. Refrigerate until ready to use.

To serve: Split biscuits with a fork. Top with a piece of chicken, a dollop of sauce, then a big spoonful of the slaw. Close biscuit and eat. Repeat.