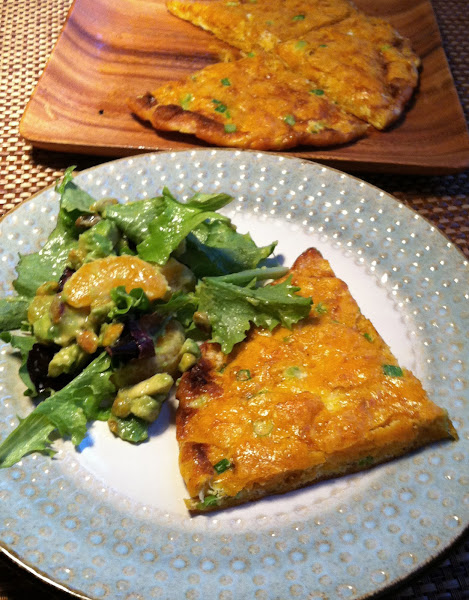 You might remember a few weeks back reading about our boxes of various Calbee snacks. Rather than just eating them as they were, I thought it might be fun to use them in recipes. First, I employed shrimp chips as an extra-crisp crust for fried tofu; for this post, a bag of potato chips was transformed into something both simple and elevated.

Ok, mostly simple, but elevated in that the recipe is a riff on a dish by famed Spanish chef, Ferran Adria. The omelet-like tortilla espanola is a popular tapas dish made with fried potatoes and eggs. Adria simplified the dish by using potato chips in place of sliced and fried raw potatoes. His recipe called for Serrano ham and pequillo peppers; I omitted both and added simply sliced green onion in their place.

Now when the recipe calls for a "small" skillet, that means 8". Any larger than that, your omelet will be a pancake. If all you have is a 10" oven-safe skillet (as was our issue), lower the cooking time a skotch so your tortilla won't get dried out.

Beat two eggs in a medium bowl and add the potato chips. Let stand until slightly softened, five minutes or so. Beat the remaining eggs in a separate bowl, then stir into the potato/egg mixture. Add the scallions and season with pepper.

Heat the olive oil in a small non-stick ovenproof skillet. Add the egg mixture and cook over medium high heat until the bottom is golden brown, about 3 minutes. Broil for about 2 minutes more, until the top is golden and the center is just slightly jiggly.

Slide onto a plate, cut into quarters, and serve with a nice salad or bowl of soup. (Gazpacho would be perfect here.) Depending on the saltiness of the chips used, you may or may not need to add a pinch at the table.