As I mentioned in a post a few weeks ago, I stayed in Koreatown when I was in NY for Fashion Week. Despite all the tempting offerings that surrounded my hotel, I kept my consumption of Korean food to one meal. And what a meal it was!

Gaonnuri is on the 39th floor of a building at 32nd and Broadway. The sweeping views of the city are only somewhat distracting from the excellent food. With a menu full of tempting Korean dishes like haemul pajun (scallion and seafood pancake) and japchae (stir fried glass noodles) plus the option of tableside barbecue, I had a hard time making decisions. I wanted it all, so that's what I had - the tasting menu. Eight courses, including dessert, plus an amuse bouche. Washed down with Hite beer. 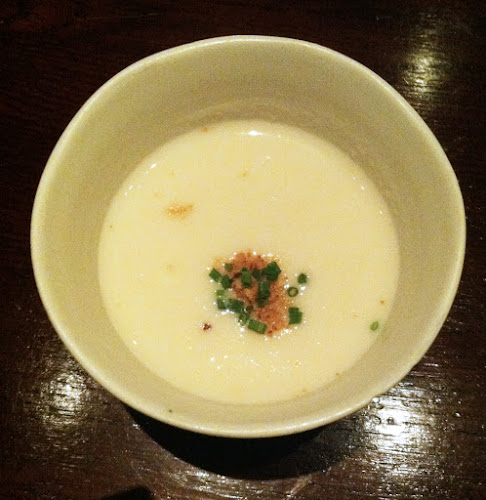 The rather bland amuse was a thin rice porridge, perhaps to clean the palate of any previously consumed flavors.

If I didn't know this dish was pork, I would have thought it was beef. The medium-thin slices were served chilled, and were somewhat difficult to eat with chopsticks and a spoon (traditional Korean tableware). I managed. The dish, though meaty, was a light and refreshing start to the meal.

Two kinds of Korean dumplings and shredded beef and egg floated in an intensely beefy consomme-style broth. I'd take this over won ton soup any time.

I'm most familiar with crispy, lightly greasy, haemul pajun and we almost always order the seafood and scallion pancake when we eat Korean food. I was not at all familiar with the three varieties served in this course. None were crispy, and the oyster and perilla/pork versions reminded me more of omelets than pancakes. The beef one, wanja jun, was similar to a meatball. Or in the case of my pancake of ground shortrib, beef tartare. The outside was browned, but the inside was close to rare. It was mildly seasoned, so the beef flavor shone. I think it was my favorite of the three.

One normally finds galbi (or kalbi) in cut in thin slices across several bones, but at Gaonnuri, the short ribs were western-style, served in big meaty chunks, off the bone. Easily the best short ribs I have ever eaten, the meat had a perfect fat-to-meat ratio, and were melt in the mouth tender, with that lovely sweet galbi flavor. Gorgeous.

If you've ever tried misoyaki butterfish at restaurants like Morimoto or Roy's, then you have an idea of what the black cod gui was like -- tender, very fresh fish with a sweet, caramelized skin. A little bean paste and gochujang on the side could be employed to add variety to individual bites, and the lightly cured kimchi added tartness to the dish.

I love dolsot bibimbap, a dish of rice with vegetables and protein served in a sesame oil-slicked screaming-hot stone bowl. The bowl and oil lightly fry the rice, making for mouthfuls of varying textures once the ingredients are stirred together. This version had shrimp, squid, and a little fish roe, and it was as good or better than any other I've tried. The final savory dish, served at the same time, was a lightly spicy stew with chunks of zucchini, beef, and tofu, and also among the best versions I've tried. A big bowl of it would be a great choice on a blustery night, warming and soothing.

By the time dessert arrived, I was stuffed, so I couldn't do the lovely crisp apple galette justice. I felt the huckleberry compote to be a little on the sweet side, but otherwise I enjoyed the few bites I was able to eat.

All that for $105, with an amazing view of the city. I'd definitely do it again (and take Mr Minx along for the ride).