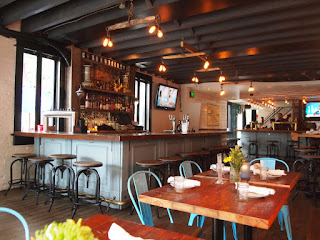 It took us a while to get to Jokers n Thieves. A media dinner had been scheduled a while back, but the curfew put the kibosh on that. Instead, we media types went in dribs and drabs on various weeknights; June 17th was our turn.

Formerly JD's Smokehouse, Jokers n Thieves is an attractive bar on the quieter side of Canton's O'Donnell square. Jesse Sandlin, who had most recently ruled the roost at Oliver Speck's and Vino Rosina, is running the kitchen and serving up quasi-lowcountry vittles with splashes of local color. 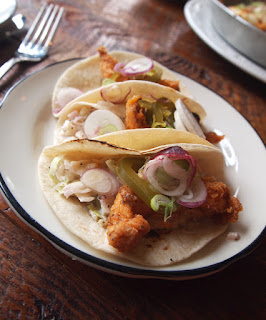 We started our meal with two drafts, a Southern Tier double IPA and Union Craft AM Gold (which had tasted strongly of coffee when I sampled it at the brewery but just tasted like beer at JnT) and a couple of appetizers. The "white trash tacos," (fried chicken, slaw, pickled jalapenos, queso) would be as comfortable in Dundalk as in the Carolinas. I thought they were perfect little bites, and appreciated that the fillings were encased in single corn tortillas, rather than doubles, which I think muffle the flavors a bit (and are better for juicy fillings). 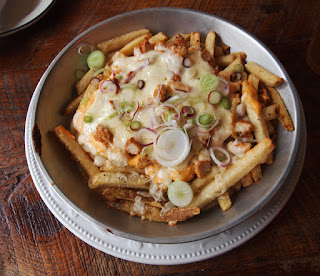 We also had the poutine, a massive pile of fries covered in two kinds of cheese with little nubbins of fried chicken (the menu said smoked chicken, so I suppose they were out). This is a dish best served to a mob, as it's far too much for two people. It was salty and cheesy and would probably make a hell of a hangover helper with a fried egg or two on top. 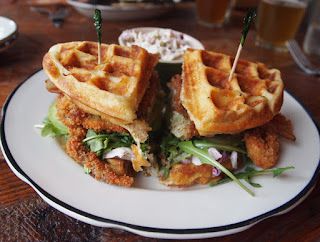 I had seen photos of the soft crab waffle sandwich on Instagram, and determined that I HAD to have it. OMG, it was so good. Hands down it was the most tender soft shell I have ever eaten (and I've eaten so many of them in the past two weeks, you don't even know). The coating was crisp, but the crab was so plump and juicy underneath, I couldn't tell there was shell in it at all. And the accompaniments - house smoked bacon, green tomato, arugula, slaw - were perfect. The bacon was crisp and not too smoky, the tomato and slaw added just the right amount of both moisture and acid. And the waffle was really tasty. Of course, waffles get soggy fast and by the time I got to the second half of the sandwich, it was falling apart, but it was worth the mess. 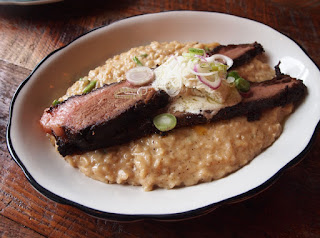 Mr Minx opted for the 12-hour smoked brisket, which came elegantly presented as two toothsome slabs over a generous serving of slow cooked Carolina gold rice studded with bits of asparagus. It was nicely smoky and worked well with the bleu cheese butter on top. We also enjoyed the rice, which was not quite risotto, not quite congee. A bowl of it would be comforting on a cold winter morning. Or evening. Or afternoon. 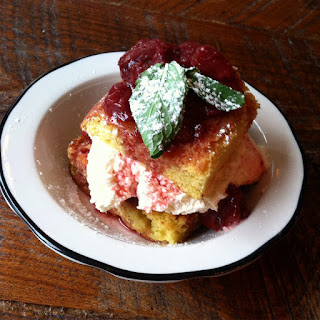 We shared a dessert, the cornbread strawberry shortcake, comprising a nicely-crumbly, somewhat coarse-textured cornbread with sugar macerated stawberries and sweetened whipped cream. The edges of the cornbread had a little crunch, and the strawberries were just sweet enough. Really good.

So, only good things to say about Jokers n Thieves. The staff was incredibly nice, the food was really good, and we liked the ambiance of the place as well. I kinda hate that it's in Canton, because we'd prefer it to be closer to us, but we can't have it all.

If you're a fan of soft shells, GO NOW and get them while the getting is good. You won't regret it.