My second day in NY was carefully planned; all activities revolved around a 2pm matinee of Hedwig and the Angry Inch. Glee's Darren Criss was playing the lead, and he did a terrific job in what was essentially a one-man show (apart from a backing band).

Before the show, I had lunch at Xi'an Famous Foods, which had just opened a second midtown outpost on 34th Street. I got there early enough to avoid any lines or crowds and was able to spend a few long minutes perusing the menu. I wanted to try everything, especially the spicy and tingly lamb face salad, the spicy cumin lamb burger, and the spicy and sour lamb dumplings. As there was only one of me, I ordered just one dish. The pork "Zha Jiang" hand-ripped noodles were lovely. A simple dish of thick, wide, lightly chewy noodles topped with a spicy mix of ground pork and scallions made for a perfect lunch. The length of the noodles made them heavy and a bit difficult to manipulate with cheap wooden chopsticks, but I soldiered on, polishing off every tasty bite. I washed them down with a cup of cold sweetened chrysanthemum tea and went on my way. 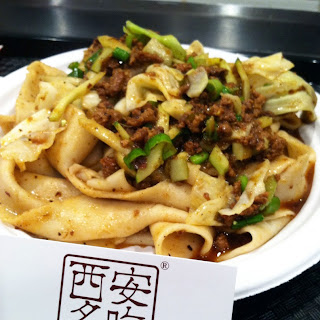 I still had time before the matinee, so hit up Lord & Taylor and Saks for perfume sniffing on my way up 5th Avenue. I didn't smell anything worth paying retail for, which is fine. More money for food.

After the show, I walked over to David Burke Fabrick in the Archer Hotel. Both of my dining spots on this day were chosen because they were in close to places I needed to be: the hotel; the theatre; Penn Station. Fabrick had the added attraction of serving dinner uber early, useful for when one has an early train out of town.

Or, that was the original idea. There was a train accident in Vermont in the morning which delayed my train by several hours. I was panicking during dinner, really wanting to get home before midnight. A conversation with a very nice Amtrak phone rep who helped me book another train scheduled a mere hour after my original eased my mind. This gave me more time to wander about, and I suppose I could have gone somewhere else to eat, but I kept my reservation and ate dinner at the ridiculous hour of 4:30pm. 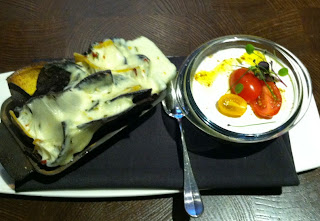 I wasn't sure at all what to order; I think the menu I had perused online was a bit different than the one I was handed at the restaurant. I ended up with the avocado panna cotta and shrimp tacos, neither of which I wanted, but seemed the best choices at the time.

The avocado dish was a panna cotta in name only. I thought a gelatinized avocado mousse would have been interesting, but it was really just guacamole and salsa layered in a bowl with sour cream and served with a dish of tortilla chips glued together with some melted cheese. It was ok, but definitely not $16 worth of ok. 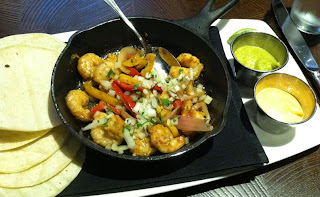 The "angry" shrimp fajitas continued the unintentional Tex-Mex theme. I suppose they should have been spicy, but the wee shrimp were not at all. I ate several tiny tacos, each with far more tortilla than filling. The chipotle aioli, surprisingly, was the star of the dish. It wasn't bad, just nothing special. 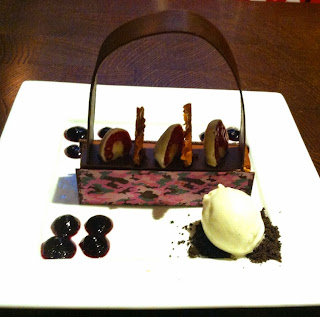 What was special, however, was dessert. I have been Facebook friends with Burke's corporate pastry chef, Zac Young, for years now. (You might remember him from the first season of Top Chef Just Desserts, and from the Food Network's Unique Sweets). Despite not normally going for chocolate desserts because I find them too heavy, I ordered the chocolate hazelnut "handbag," with gianduja mousse, raspberry ganache, and vanilla bean ice cream. The whimsical pink camouflage-patterned creation also included white chocolate filled and coated raspberries, and a bit of coconut brittle, and was by far the most satisfying thing I ate at Fabrick.

On the way to Penn Station, I stopped by Macaron Cafe to pick up half a dozen of the sweet treats. I gotta say these are the best macarons I've ever tried. They're amply sized, with chewy cookies and interesting fillings, from rich ganache to a bitter matcha creme. I'm going to have to make this a regular stop on my trips to NY, although I'll have to pick up some from Ladurée next time too, for comparison.