Over the past few years, we've been to many media dinners at B&O American Brasserie, usually to herald a new chef and his complete reinvention of the restaurant's menu. While all of the dinners were enjoyable, some dishes we ate along the way were downright weird. I'm happy to say that the B&O's current chef Michael Ransom is not only still around (huge hooray for that!), but he's also not doing anything bizarre with food.

That's not to say he's not imaginative. He is, very much so. But his imagination is practical, not fanciful. Definitely not weird. He has the ability to innovate and be accessible at the same time. His dishes are ambitious enough to impress hardcore food snobs, and so flavorful and well-composed that everyone else can enjoy them as well. 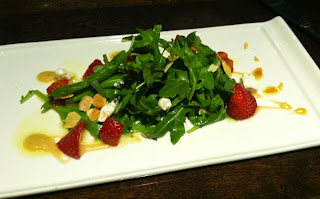 At this dinner, we left ourselves in his capable hands. He came to speak to us and told us what menu items he planned to serve Mr Minx and me, starting with the strawberry salad, which would be a refreshing start to our meal. The pickled strawberries and the tang of sherry vinegar were balanced by sweet fresh berries and crunchy toasted almonds. 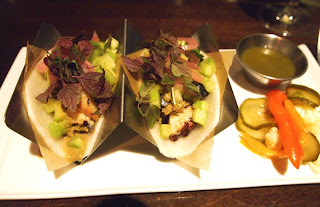 Next, we received a pair of tacos with a filling of charred octopus, chorizo verde, celery-herb salad, and pumpkin seed vinaigrette in a raw jicama shell, with harissa pickles and a fiery green hot sauce on the side. Personally, I could have done without the celery, but otherwise loved the combination of ingredients. The hot sauce wasn't as incendiary on the taco as when tasted straight, but it still had a strong kick. I don't recommend anyone drinking it. And the jicama wrapper proved that there is such a thing as a completely gluten-free (practically calorie-free, too) taco shell. Genius. 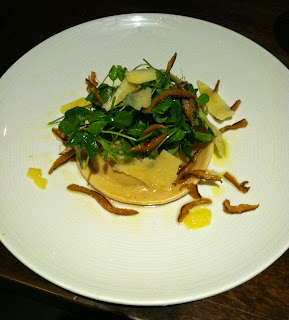 We also shared a single large raviolo, filled with ricotta and a perfectly runny duck egg yolk and topped with shaved Parm, pea tendrils, and crispy shards of shiitake mushroom, all dribbled with brown butter. A seemingly simple dish, but full of flavor. 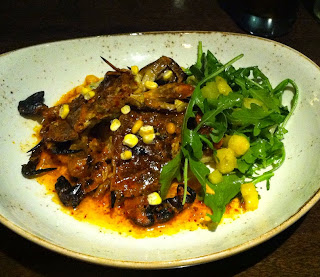 Then we moved on to the entrees. The one I was most interested in involved soft shell crabs. Full disclosure: Chef Ransom is working on a soft shell recipe for our upcoming book, and it's going to be a lot like this one: Soft Shell Crab, crushed leeky potatoes, green tomato salad, chili-lime butter, crispy corn. The crabs were poached in chili-lime butter before being finished on the grill, a technique that left them tender and super juicy. There were a lot of tangy and complicated flavors on this plate, tempered by the mild potatoes, which Chef Ransom meant to evoke potato salad. Mr Minx, never a fan of soft shells, found the dish to be "a revelation." 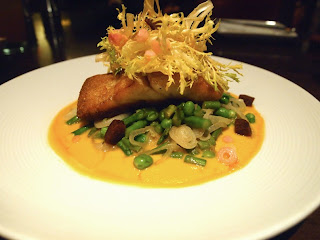 Another stunner, both visually and flavor-wise, was the evening's market fish, in this case flounder, served with spring vegetable ragout, pickled ramp, yellow tomato coulis, and spanish chorizo. I normally find typical thin flounder filets to be a snooze, but the creature this slab came from must have been a monster. The fish was as thick as halibut and very moist, but the star of the plate was the spring vegetables, which included large semi-starchy English peas and asparagus. The tomato coulis wasn't at all acidy, and the nuggets of confit chorizo and drizzle of chorizo oil gave the dish depth. Really beautiful. 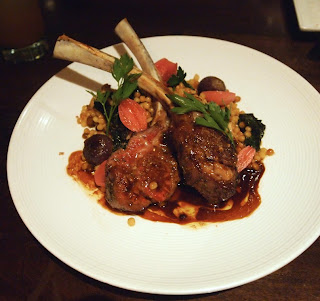 We also tried the chef's cut of lamb (this week it was racks; because we were eating three entrees between us, Chef simply cut one chop for each of us), served with fregola, shitake, field greens, pickled and roasted onions, natural jus, and dried lemon salt. The chops, beautifully frenched and resembling miniature tomahawks, were juicy, pleasantly fatty, and perfectly medium-rare. The accompaniments were rich and earthy, punctuated by bites of acidy onion and a hint of lemon.

We drank a couple of cocktails apiece with our meal: a light and bright cardamom-spiked daiquiri and a perfumey (in a good way--expensive perfume) "Tin Cup" for me; the whiskey and sherry combo called a Cadizian and a rather whiskey sour-ish Glen + Tea for the mister. For dessert we had simple scoops of ice cream and sorbet in honey thyme and pineapple flavors. The sorbet was great, and the ice cream was pretty good too, even if the dried fresh thyme garnish did remind me of pizza.

Chef Michael Ransom's Spring menu is a real beaut and we'd really like to get ourselves back to B&O in the next few weeks to sample a few more items. Or just get the fish and crabs again. And the tacos. And....