The Hampden storefront that now houses Le Garage has a curious history. Located in approximately the center of "The Avenue," it has a great location, free parking around back, and has been occupied by some pretty good restaurants. Years ago, it was Mamie's with it's kitschy diner/neighborhood restaurant vibe and the cheap lobsters on Wednesdays. More recently, it was The Dogwood, a more upscale but casual establishment with great food and a substantial bar. For different reasons, neither restaurant survived and the prime real estate stayed unused for a while. Now it's Le Garage and the buzz about the place is largely positive. After putting off a visit for some time, the Minx and I decided to use Restaurant Week as a perfect excuse to check the place out. 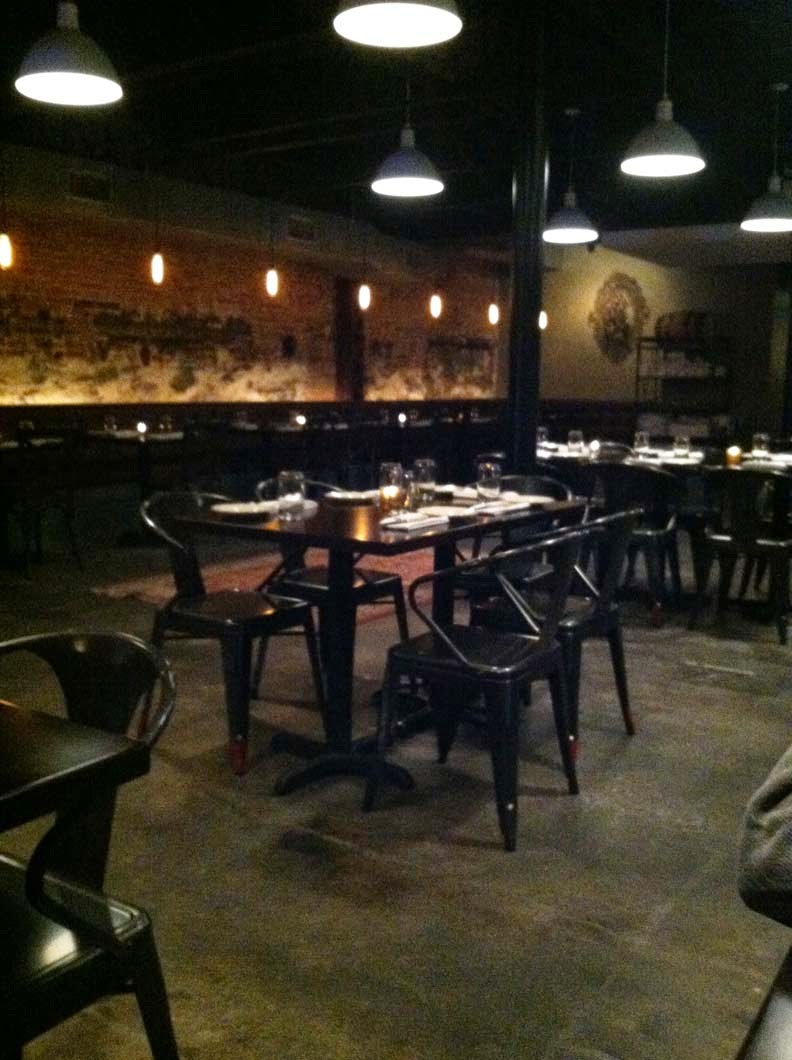 The decor is a bit more rustic and utilitarian than The Dogwood was, but the giant bar is still in place. Shelving units cleverly divide the bar area from the dining room. Our enthusiastic waitress got down to business right away by asking if we wanted cocktails. I went for the Union Double Duckpin on draft and, since it was crazy cold that night, the Minx ordered the hot buttered rye. Double Duckpin is a pleasantly floral double IPA, light on the bitterness. I'm not a fan of hot alcoholic drinks, but the Minx loved her drink's combination of rye and spiced compound butter. 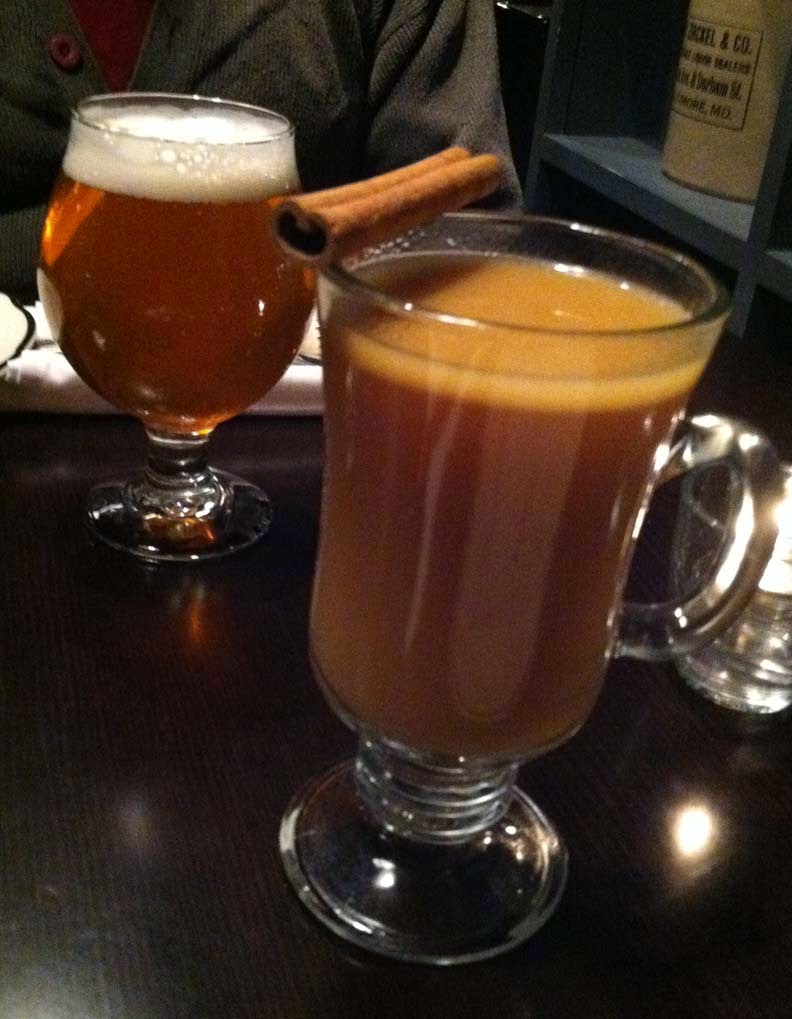 Since Le Garage is known for their Belgian-style frites, we had to order some. The thick-cut potatoes are crispy on the outside and fluffy on the inside, as good frites should be. A selection of sauces are available to go with them, so we chose the chili ginger aioli. Happily, the sauce was garlicky, as aioli should be, and the spicy kick from the chili and ginger lightened the flavor of the thick fries. 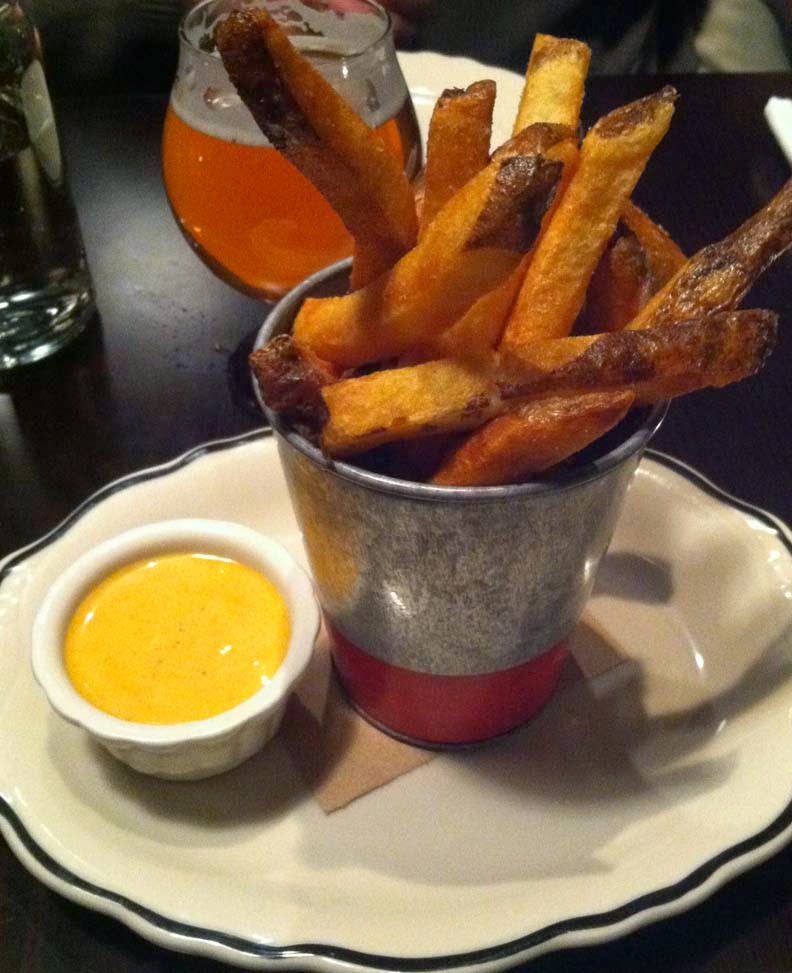 For my appetizer, I ordered the octopus escabeche. The small octopi were tender, but had more texture than flavor. The tangy lime dressing was a bit overwhelming, and while the dish was visually appealing, celery shavings and watermelon radish didn't really add much, flavor-wise to the dish. The Minx thought the mini fruit salad under everything (blackberries and raspberries) was just plain weird. Larger, meatier, octopus would probably work much better in this dish. 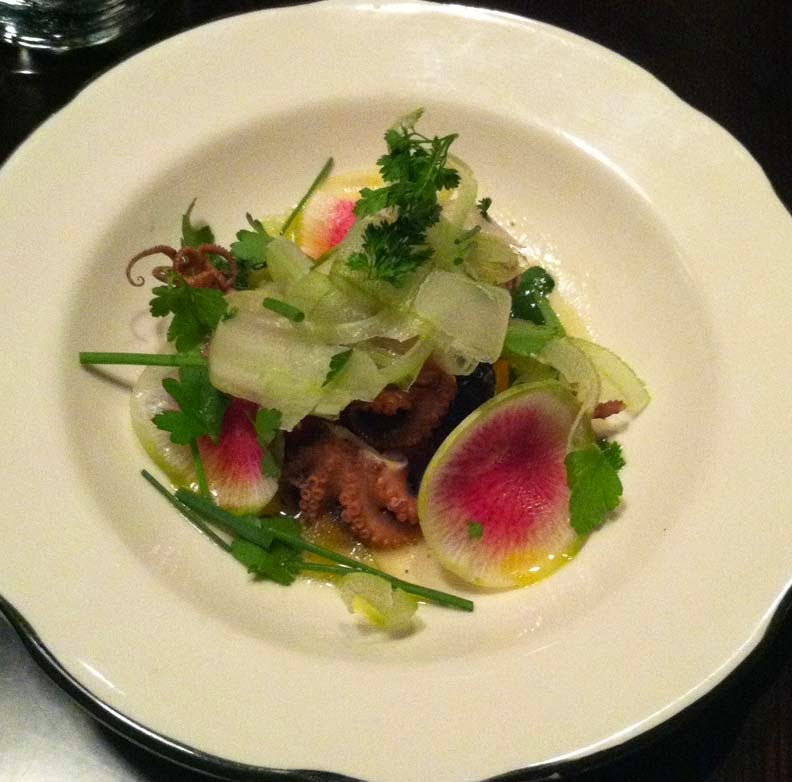 The Minx fared somewhat better with her crispy pork belly, but not entirely. The pork belly was a little too crisp on the outside, as if it had been deep fried, and the dish needed a sweet element to balance all the rest of the tart and salty elements on the plate. The dark crumbly substance was "olive candy," which seemed to be dehydrated olives; it was briny and didn't have any sort of candied element, at least not to our tastebuds. The dish was lacking balance. 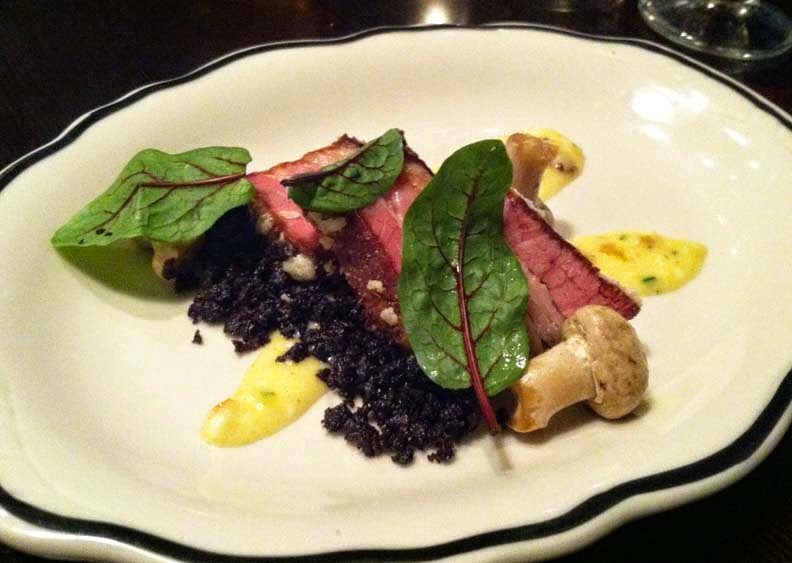 For her entree, The  Minx's chose the mussels in a ginger miso broth. We were surprised to find that they also came with frites, as it was not mentioned on the restaurant week menu, but we were happy to take leftovers home. The mussels were the biggest we had ever seen (some bordering on obscene) and the broth was rich and flavorful. The dish well exceeded our expectations and we'd happily order it again. 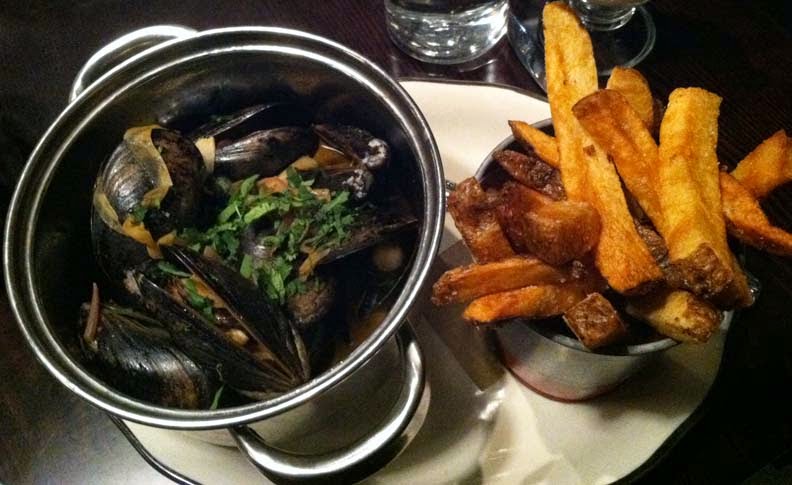 I went for the short ribs with fingerling potatoes cooked in beef fat, malted onions, and a cauliflower puree. The meat was appropriately tender and splayed nicely as my fork cut through it. While the meat perhaps was a bit less fatty than expected, the richness of the potatoes and the onions provided plenty of unctuousness. 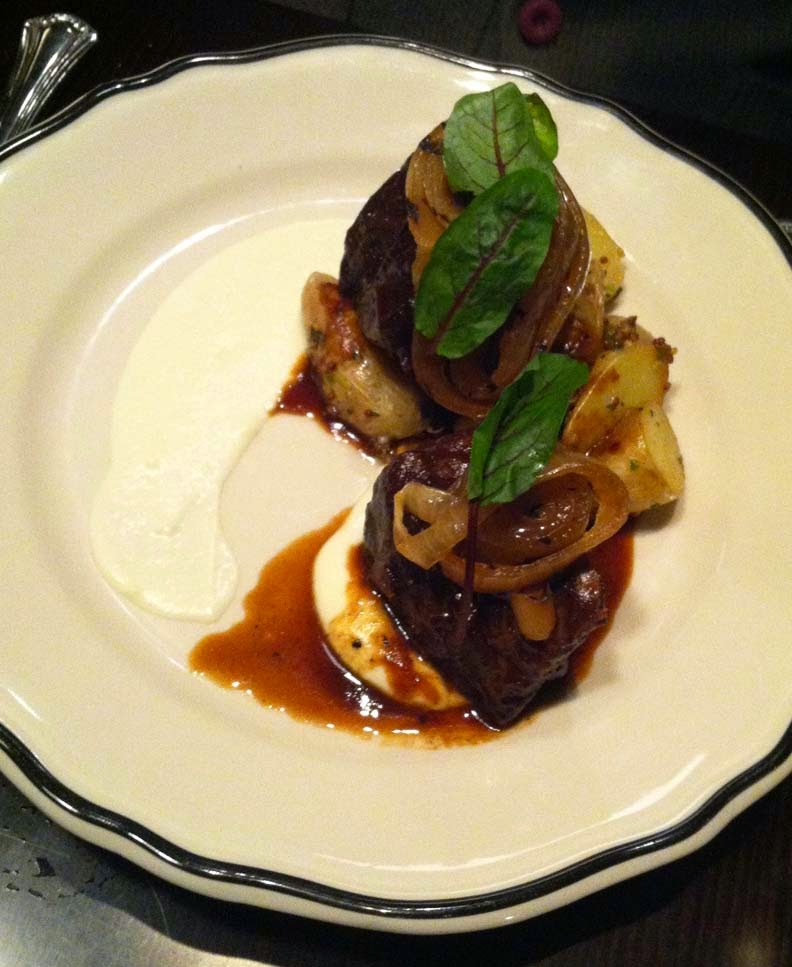 I was going to order the croissant bread pudding for dessert, but The Minx beat me to it. Soaked in salted caramel and topped with a scoop of Taharka Brothers honey graham ice cream, this decadently rich dessert was surprisingly not too sweet. So comforting and flavorful, you just want to keep eating even as you feel your arteries clogging. It's definitely big enough to share, so share we did. 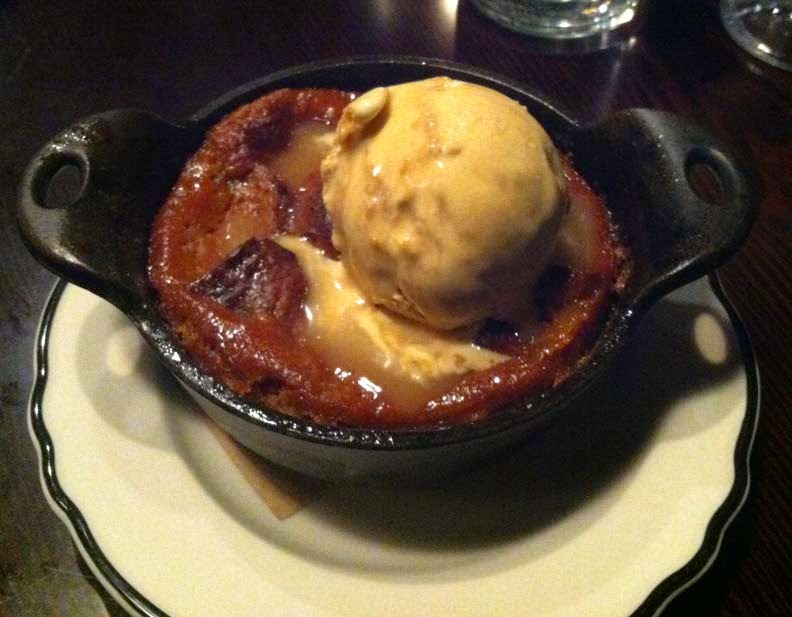 Since I had to go to dessert plan B, I opted for the goat cheese cake. There was no denying the tangy goat cheese flavor and the marmalade drizzle provided a subtle compliment of sweetness. The poached pear was also appealingly sweet. While the menu promised an almond crust, the reality was phyllo that seemed to have been in the fridge for a bit too long, making it nearly impossible to cut with the provided spoon. Still, the overall flavors were good. 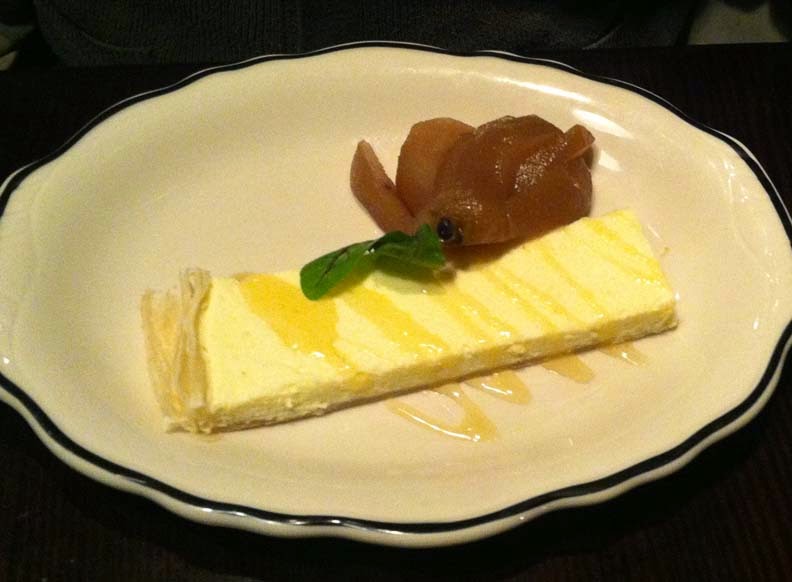 Le Garage bills itself as a "beer bar and frites," but there's a lot lot else going on in there. The menu isn't huge, but there's a lot of variety with the frites, tartines (open-faced sandwiches), and modern American-style apps and entrees. While it seemed that different people created our apps and our entrees, there are definitely some pretty good ideas floating around in the kitchen and we're looking forward to going back and exploring them.