Lasagna with Celery Root and Mushrooms 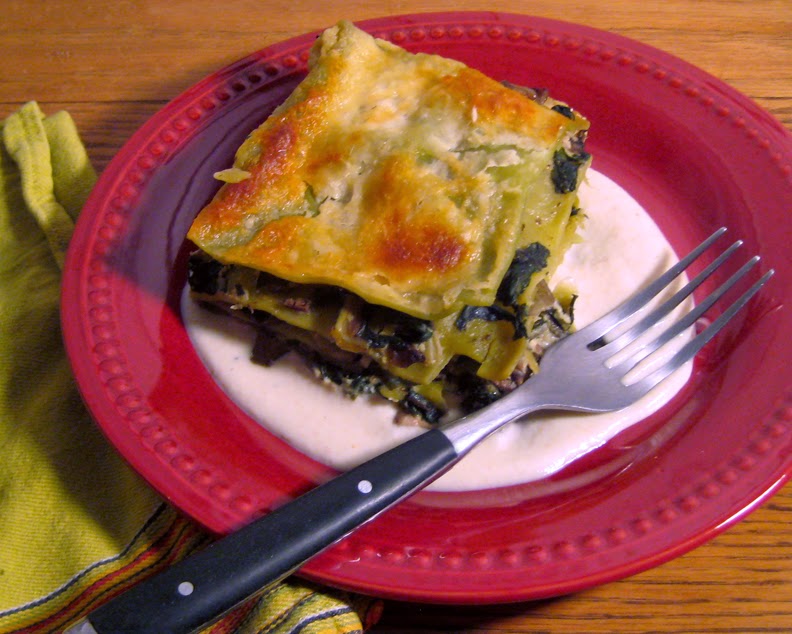 While flipping through the November issue of Martha Stewart Living magazine, I was struck by the recipe for celery root and mushroom bread pudding. I love savory bread pudding but don't make it very often because it seems a lot of work for what is essentially a side dish. But I thought the combination of mushrooms and celery root could be interesting in a main dish like lasagna.

I love love love the idea of using a celery root puree as a substitute for béchamel. I love love love celery root, period, which is odd, since I'm not a big fan of regular celery. A rich root vegetable puree + mushrooms seems so fallcozy, but maybe too rich, so I added some chard and leeks, just so there was a green vegetable present. I found spinach lasagna noodles to add even more green. The end result was very rustic and pretty darn tasty. But highly non-photogenic. :(

It might seem like this dish has lots of steps, but no more so than regular lasagna (assuming you don't just use sauce from a jar!) I like to make something like this on a weekend and spread out the various tasks during the day. When dinnertime comes, I just pop the pan into the oven and wait for the delicious smells to come wafting out.

Peel the celery root and cut into medium dice. Place it and the cream into a 2 quart saucepan and bring to a boil. Lower heat and simmer for 10-15 minutes, until celery root is tender. Season with nutmeg, cayenne, and salt and pepper to taste. Allow to cool to room temperature, then puree in a blender. Refrigerate until ready to use.

Clean, slice, and finely chop the mushrooms. Saute in a bit of olive oil and a pinch of salt until they have released all of their liquid and have begun to brown, 8-10 minutes. Season with salt and pepper. Remove to a bowl, cover, and refrigerate until ready to use.

Slice the leek in half lengthwise and cut each half crosswise into thin slices. Rinse well in cold water to remove any grit.

Wash chard very well to remove any grit. Cut off the stems and chop finely. Remove the center rib and slice leaves into thin ribbons.

Heat 1 tablespoon of olive oil in a large skillet. Add the leek and the chard stems. Cook until the stems are tender, 8-10 minutes. Add the greens and the garlic and stir to combine. Cover the pan and cook, stirring regularly, until greens are completely wilted, 5-8 minutes. Season with salt and pepper. Place leek and chard mixture in a bowl. Cover and refrigerate until ready to use.

To assemble lasagna: Spoon some of the celery root puree onto the bottom of an 8" or 9" square baking dish. Cover with lasagna noodles. Spread another layer of celery root puree onto the noodles. Top puree with 1/3 of the chard and 1/3 of the mushrooms. Add another layer of sauce, more noodles, and more sauce. Repeat chard/mushroom and sauce/noodle/sauce layers, until all of the chard and mushrooms are used up. Finish with a sauce/noodle/sauce layer. Cover pan with foil and refrigerate until ready to bake.

To bake: Preheat oven to 350°F. Place covered baking dish into the oven and heat for 30 minutes. Remove from oven and test doneness of noodles by poking a sharp knife into the center. If there's still some resistance, put the pan back into the oven for another 10 minutes or so. If the knife slides through easily, remove the foil and sprinkle on the 1/2 cup of cheese. Return to oven and bake an additional 10 minutes, or until cheese and top layer of sauce browns.

Remove from oven and allow to rest for a few minutes before cutting and serving.