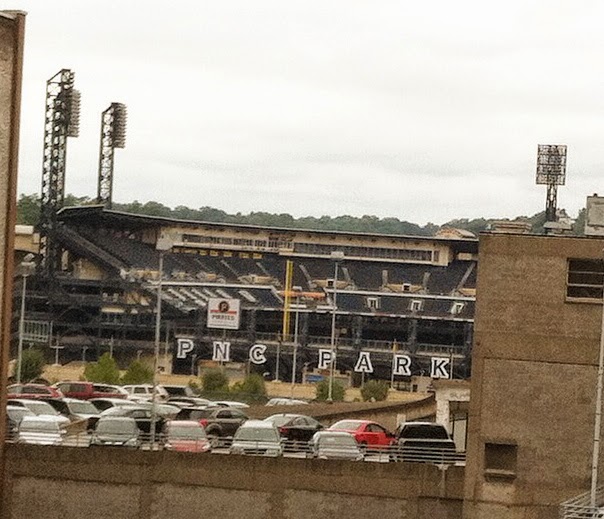 * This should be said in the manner of Joe Flacco in a 1st Mariner Bank commercial.

So I went to Pittsburgh. For a funeral, which seemed entirely fitting. It was a quick trip, much of it spent on the road, but my traveling companion, Kim, and I made the experience as fun as possible. And we squeezed in two restaurant meals.

I had quizzed a friend, whose spouse hails from the city that supports the Baltimore Ravens worst enemy, about restaurant recommendations. She offered up several, a few of which came with the caveat that she had not tried them but had heard good things. Another restaurant, the Pleasure Bar, came with praise from both her and her husband. We decided to check it out.

The name conjures up visions of a cozy and dark space that serves up both good food and fine libations. Instead, the corner restaurant in Pittsburgh's Little Italy seemed rather generic and certainly not cozy. The menu comprised Italian-American favorites like ravioli, eggplant parm, and stuffed shells. We started out with an appetizer order of fried calamari. It was ok, nothing special, and possibly not house-made. Lemon wedges would have been more useful than slices. 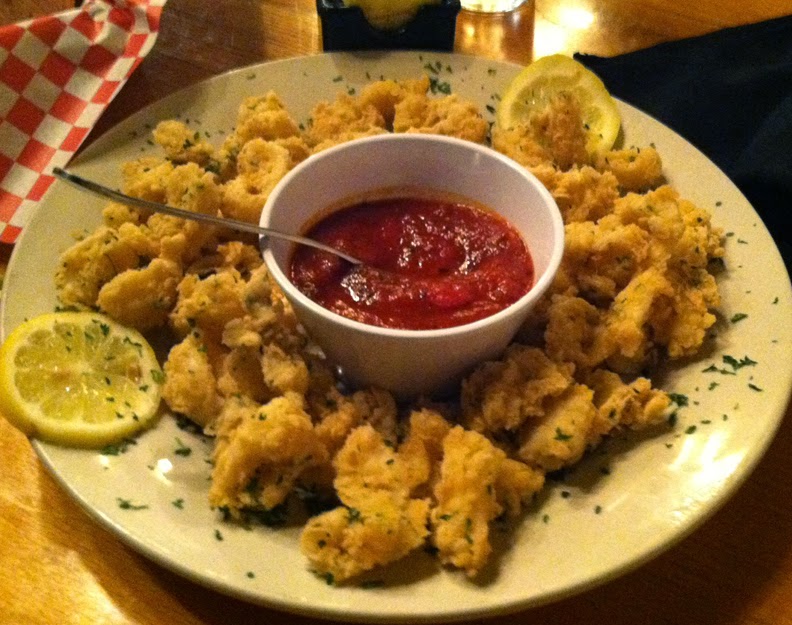 I wasn't in the mood for Italian food, but was contemplating the eggplant parm. Then I spotted the crab cakes. Yes, I know that it's a really dumb idea to order crab cakes anywhere outside of Maryland, but I wanted to know how badly they could be fucked up in a place like Pittsburgh. 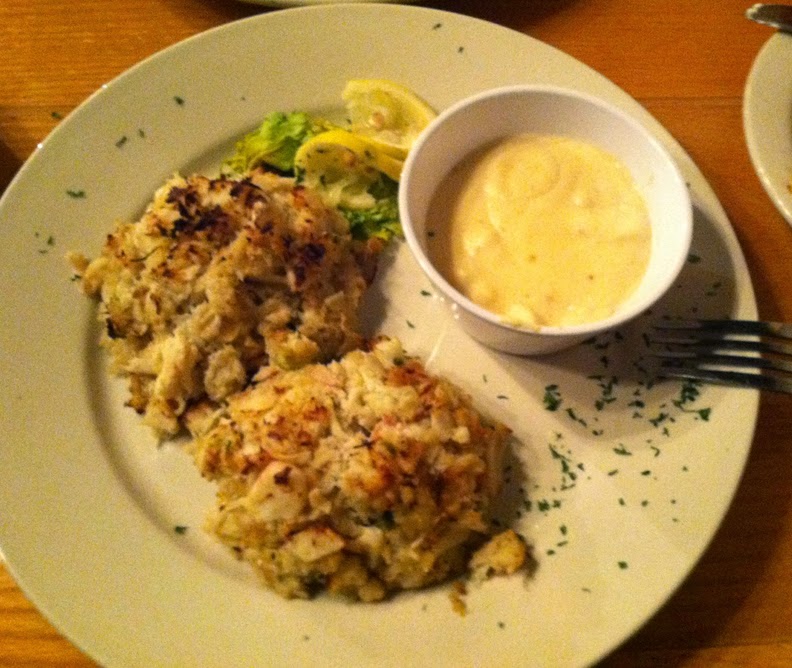 Turns out, pretty fucked up.

Before I ordered, I asked our waitress about the origin of the crabmeat. When she went off to the kitchen to ask, I predicted she would tell us that it came from such-and-such distributor. And indeed she did. She said something about the meat being combined with their crab cake mix, which should have set off warning bells in my head. Instead, I chose to believe that it referred to breadcrumbs, egg, seasonings, and mayonnaise. After I explained that I wanted to know where the crab lived before being caught, she apologized for her mistake and ran back to the kitchen. When she returned, she said it came from "various parts of the Atlantic." She even added that she didn't really like crab cakes, but the ones at the Pleasure bar were soooo good, she would eat them.

I ordered them anyway.

In all honesty, they didn't taste bad. They did taste of bell peppers, which I don't care for and which do not belong in a Maryland crab cake. But this was Steeltown. It was the filler that was the real problem. I found a number of spongy, red-tinged objects in the cakes, and after careful analysis, I determined that they were...fake crab meat. That surimi crap that comes in cheap California rolls. I can almost forgive this, since it still sorta kinda is at least a seafood product. But the overall texture of the crab cakes was unpleasantly mushy. Had the ramekin on the side been filled with a nice remoulade sauce, there would have been a bright side. Alas, it was grainy "Alfredo" sauce.

Please indulge me in a small side rant here. The Italian chefs I know all rail on serving cheese with seafood; I just roll my eyes at this. So why is this Italian restaurant serving "Alfredo" sauce (that is, a bland white sauce with some cheese thrown in, and nothing like the real thing) with crab cakes? 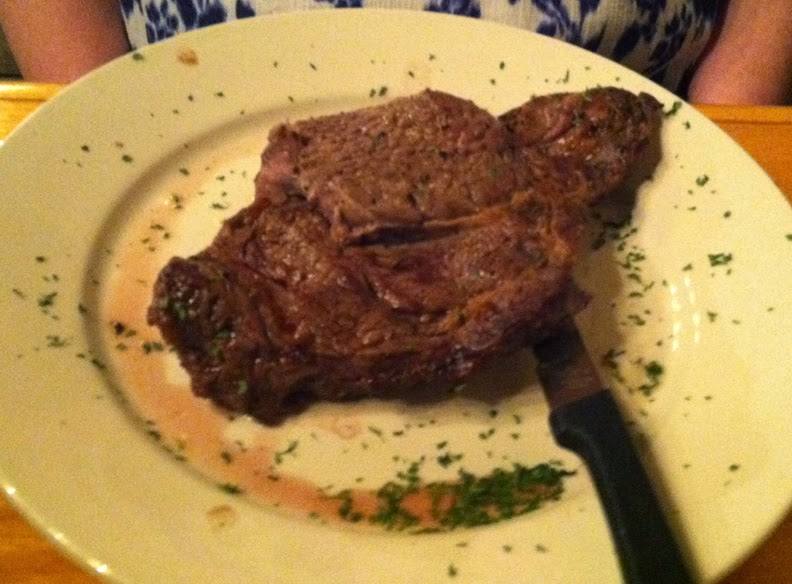 Kim ordered the rib eye steak, which, at the same $19 as my crab cakes, was a steal. You can't really tell from my cellphone pic, but it looked like it had been steamed rather than grilled or pan fried. And a goodly portion of it was gristle.

Oh well, better luck next time. Guess we should have stuck to the Italian-American food.

The next day, after the funeral, we headed back downtown to a gastropub called Meat & Potatoes, one of the recommended restaurants that had the "but we haven't tried it" caveat. We've tried it, and I have to say...we'd try it again. (Not that we ever plan to revisit Pittsburgh, but stranger things have happened.)

We were those terrible people who walk into a restaurant fifteen minutes before the kitchen is scheduled to close. But we ordered quickly! It was lunchtime, so their menu offerings weren't quite as interesting as those at dinner, but we quickly settled on the burger and the bibimbap.

The burger was huge, delicious, juicy (despite being cooked to medium well, as requested by Kim) and the accompanying fries were crispy and nicely browned. The tasty bread and butter pickles on the side were likely house-made. My bibimbap was outstanding. While I'd have liked more rice to absorb all of the hot sauce and pickle juice from the cukes, the flavors were bold and the huge slab of pork belly was moist and nicely fatty. (My mouth is watering as I'm typing this.) The egg yolk could have been runnier, but overall, this dish was terrific.

We splurged on dessert, because, well, we were grief-stricken (not by the previous night's meal, but by the funeral) and needed comforting. There were three choices, including a chocolate pot de creme, but I went for the cinnamon panna cotta and Kim chose the unpleasantly-named peanut butter Oreo dirt.

The panna cotta had a nice cinnamon flavor and I really enjoyed the fall-ish caramelized fruit topping, Kim's evil concoction was pretty tasty, too, and almost large enough for two servings.

The Pleasure Bar wasn't pleasurable, but I'll cop to making bad choices. Meat & Potatoes was delicious, however, and I wouldn't mind checking it out again. If I didn't have to go to Pittsburgh to do so.