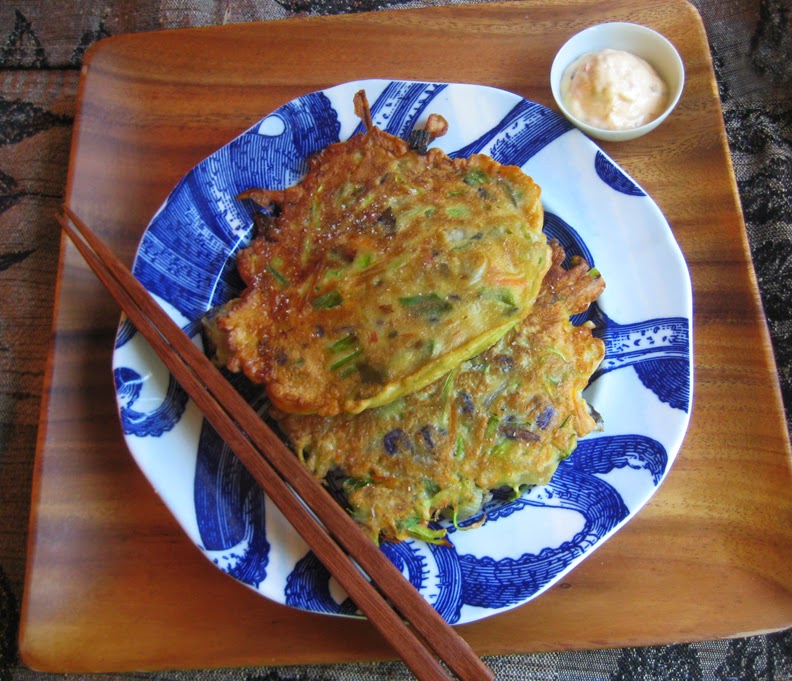 A while back, I found myself with a bunch of vegetables--a fennel bulb, a bag of broccoli slaw, sugar snap peas, lots of green onions, roasted tomatoes--and not a lot of ideas. Well, there were ideas, but nothing particularly cohesive. Because we had eaten a bunch of meat recently, I wanted to make a primarily vegetarian meal. But what to do with that motley crew of produce? The tomatoes were really throwing me off, so I decided they could wait for another meal. The rest I would use in vegetable fritters.

There was also a bunch of Thai basil in our container garden. The plant was going a bit wild and needed serious trimming, so basil became part of the meal plan. And as I had just opened a new jar of pad kapao sauce, some of that would go in, too. I really love that stuff. It's spicy, aromatic, basil-y, and garlick-y, and it's good on just about everything. Mix it with mayonnaise and put it on a turkey burger. Put it in the turkey burger, too. Mix it with softened cream cheese and spread it on a bagel. Yes, for breakfast. (Hey, "everything" bagels have garlic and onion on them, so why not?) Mix it with softened butter and stuff it under the skin of a chicken before roasting. Put a tablespoon of it in plain tomato soup to eat with that grilled cheese sandwich. Pad kapao sauce is my sriracha. I've gotten my brother hooked on it, too, and the last time we hit an Asian supermarket together, we each bought several jars.

Eventually, I ditched the fritter idea and went with okonomiyaki-style pancakes. Okonomiyaki uses dashi, which isn't vegetarian, but you can certainly substitute some veg stock or just plain water in the batter. Me, I like the vague fishy flavor of the dashi.

Okonomiyaki are commonly served with Kewpie mayonnaise and unsweetened pickled ginger. Instead, I added some of my favorite chilli basil paste to a little Duke's mayo.

Put the dashi powder and water in a microwave safe bowl. Heat long enough to warm the water and dissolve the dashi, 45 seconds to 1 minute. Let cool.

In a large bowl, combine the flour, sugar, baking powder, and salt. Slowly add the cooled dashi to the flour mixture, stirring to make a batter. Add the eggs and chilli sauce. Cover and refrigerate batter for at least an hour and up to three hours.

After the batter has rested, add the scallions, vegetables, and basil to the batter; it will be very thick. 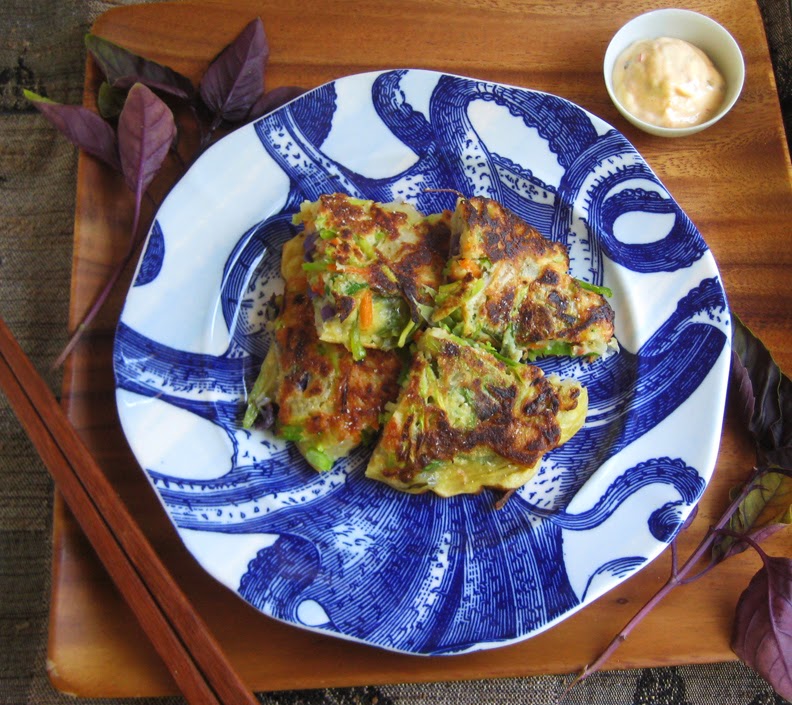 Add a tablespoon of canola oil to an 12" nonstick frying pan and heat until it shimmers. Make 3 approximately 5" pancakes with the vegetable batter. Cook until bottoms are golden brown. Flip with a spatula and cook other side until brown. Remove pancakes to a paper towel-lined plate. Cover with foil to keep warm. Repeat until all batter is used.

Make a sauce with the mayo and chilli sauce. Serve with the pancakes.