We were going to spend the day in Fells Point, but my allergies were kicking my ass so much, I couldn't walk and breathe at the same time. And there's lots of walking to be done in Fells Point. So we stayed home. I scrounged around the medicine cabinet and found a decade-old Sudafed, which I popped while cursing the fact that the stuff is hard to get a hold of these days. Fkn meth addicts. Eventually I was able to breathe well enough to walk from the parking lot to a restaurant, so we discussed where we should go for dinner. Not to Fells Point, since Towson and environs were so much closer. Granted, there's not as much choice for good grub in the 'burbs, but we do ok.

One restaurant we hadn't been to in ages had moved to a new location a couple years back, so it seemed like a good idea to revisit the place. Saigon Remembered, once across the street from the Senator Theater, is now in a shopping center on Cranbrook Road in Cockeysville. The new digs are smaller and prettier, simple and elegant with light colors and white tablecloths. The menu seemed less voluminous than in the past. I once found it a bit intimidating, but now it was easy to navigate.

I knew right away that I wanted their grape leaves appetizer. Absolutely nothing like the familiar Mediterranean preparation stuffed with rice and sauced with lemon, the Vietnamese version is stuffed with tender marinated beef before being skewered and grilled. While not as charred as the ones I've eaten at Saigon Remembered in the past, these were still delicious, especially when dipped in the little ramekin of nuoc cham. Nuoc cham is the ubiquitous dipping sauce of Vietnam, made with fish sauce, garlic, sugar, and rice vinegar and/or lime juice. It's savory, sweet, and tangy all at the same time and perfect with pretty much everything on the table. 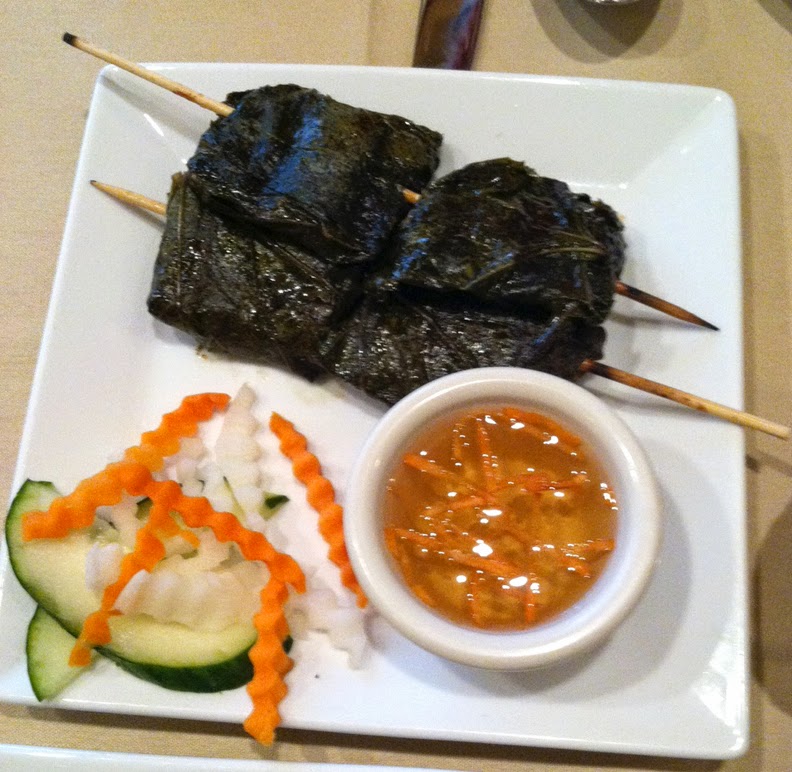 That include the rolls that we also ordered. Saigon Remembered has a large selection of the soft rice paper-wrapped rolls that are sometimes called summer rolls. They are typically filled with vermicelli noodles, herbs, and a protein or two. We chose grilled shrimp for ours, and I must say I was a bit disappointed. While Mr Minx seems to have received a whole shrimp in his roll, mine was mostly noodles. For $7.50, I expect a bit more, especially since I can make these at home fairly easily. 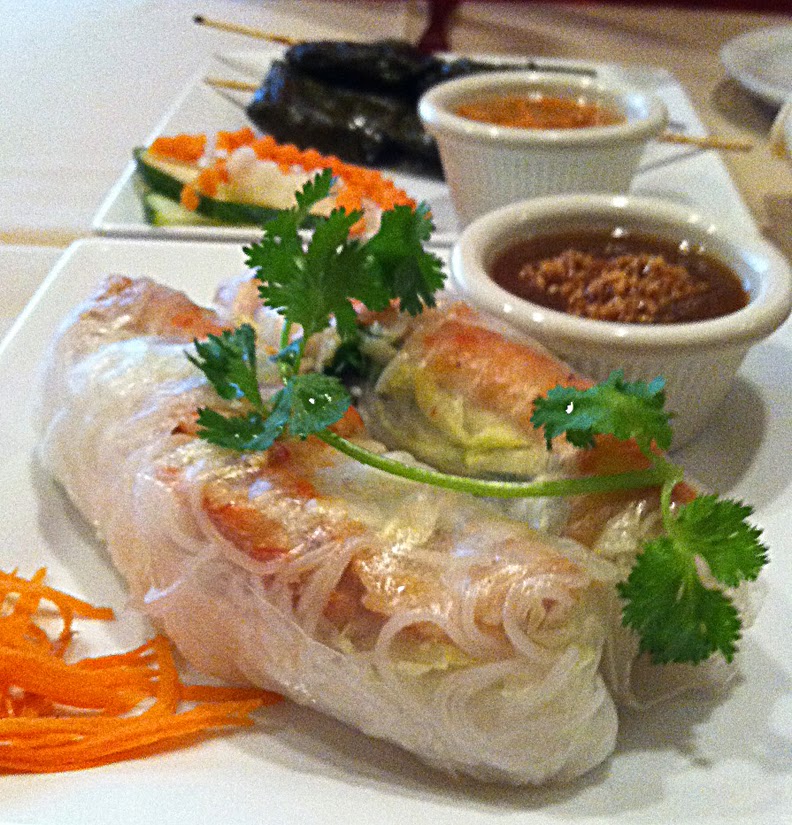 We also tried the papaya salad, which was quite different from the spicy and sour Thai version we are used to. At Saigon remembered, the shredded green papaya has a sweet, but not spicy, dressing, and includes a generous amount of both medium shrimp and bits of pork, plus the unexpected addition of Thai basil. The accompanying dish of nuoc cham and giant fried shrimp chips added punches of extra flavor and crunch. 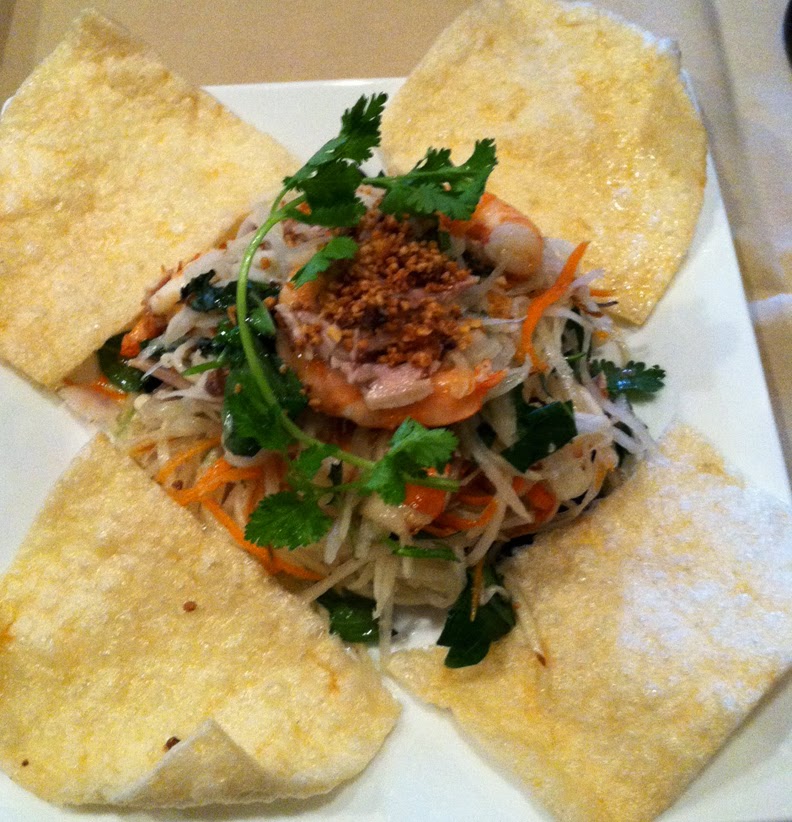 After we polished of our appetizers, we headed on to entrees. I ordered the golden crepe, which I had never had before. It was huge and resembled a giant omelette. The crepe itself was light and crisp, embedded with bits of shrimp and onion and filled with a plethora of bean sprouts. The filling was a bit bland, but livened up when I added the nuoc cham, pickled carrot and daikon, and Thai basil on the side. 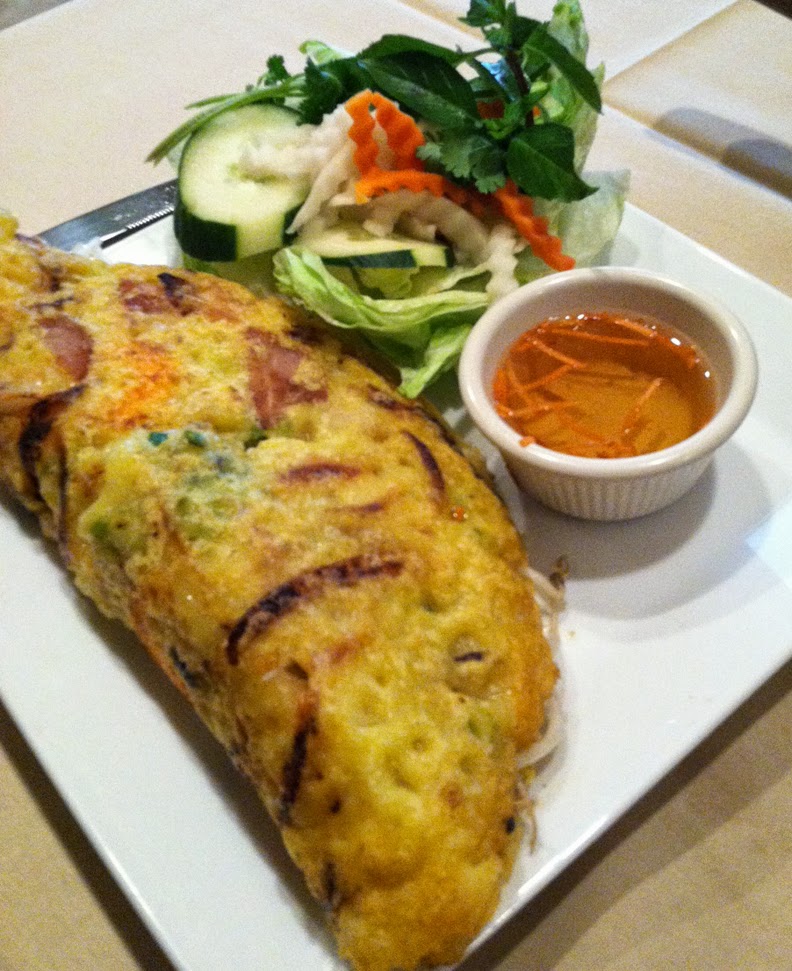 Mr Minx went for the chicken in a clay pot. The chicken and black mushrooms over a layer of steamed rice were bathed in a rather pungent and savory ginger sauce, without a hint of the sweetness we're used to in Vietnamese food (keep in mind we've never been to Vietnam!). I'm not sure how I felt about the dish, but Mr Minx seemed to like it quite a bit. 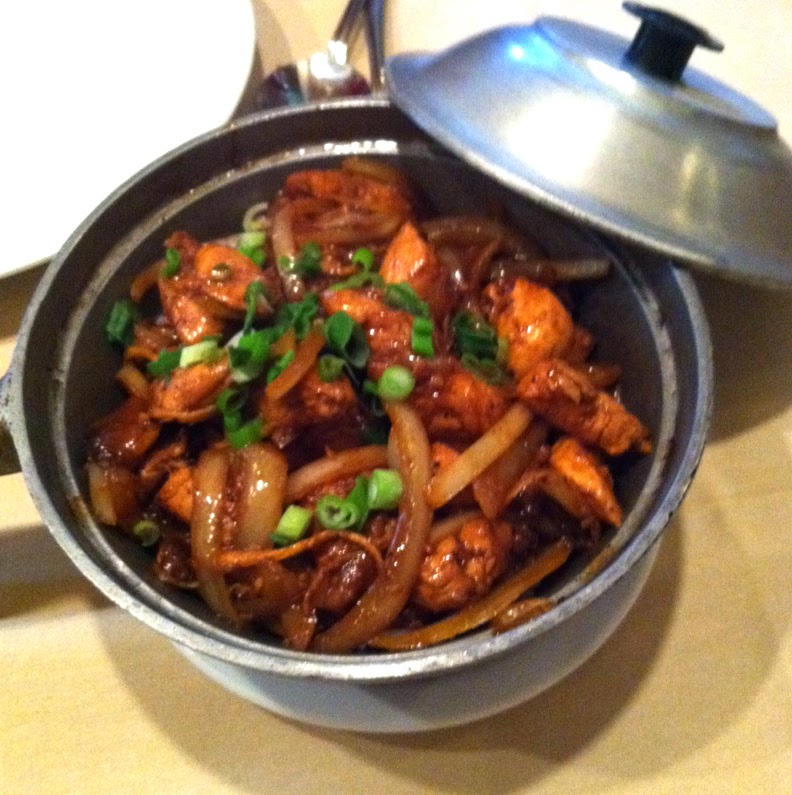 I remember being disappointed when Saigon Remembered closed its doors a few years back, mostly because of the terrible loss of those beef-stuffed grape leaves. But now I can rest assured I can have them any time I want, along with a plethora of other Vietnamese dishes. Next time: pho.