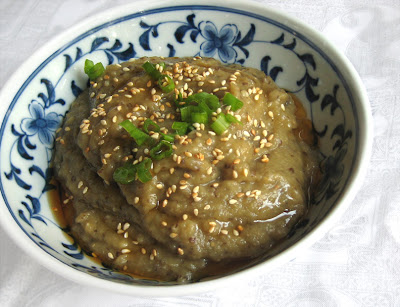 I've been on an eggplant kick recently. Mr Minx had always claimed to hate eggplant, but I find if I puree it with various seasonings, he'll eat it. I usually lean toward Mediterranean flavors, like a babaganoush or something with tomatoes, but recently I decided I would do something with a Japanese feel. We have a tub of miso in the fridge that I don't get to use very often, so I blended a few spoonfuls with eggplant that I nuked into submission. The dish was a pureed riff on a Japanese broiled eggplant dish, and I think the flavors were spot on.

Place sesame seeds in a dry skillet over medium heat, and cook, shaking the pan regularly, until the seeds are fragrant and have turned a slightly darker shade of brown. Remove from heat and set aside.

Remove stem end and cut the eggplant in half from stem to base. Place halves cut side-down on a microwave-safe plate. Cover with plastic wrap and nuke for 8-10 minutes until deflated and soft. Set aside and allow to cool.

When cool enough to handle, scrape the flesh from the eggplant into the bowl of a food processor. Add the miso, mirin, and rice wine vinegar. Stir in the cayenne and add salt and pepper to taste. Scoop into a serving bowl.

When ready to serve, combine olive and sesame oils and drizzle over the eggplant mixture. Sprinkle on the toasted sesame seeds.

Serve on crackers or French bread.