Last week, I wasn't completely motivated to do a recap. That's actually been true every week. But this week takes the cake. I don't really have much to say about episode six. Despite bitchiness and bloodshed, it was boring. Or should I say, Boring.

The cheftestants are still in Dallas, with the kitchen of Le Cordon Bleu (Paul's alma mater) standing in as Top Chef Kitchen. James Beard winner Chef Dean Fearing is this week's guest judge. He's actually famous enough that I didn't have to look him up. Of course, my brain works in strange and magical ways. The first thing that comes to mind when I hear "Dean Fearing" is "Pilgrim at Tinker Creek," but then I immediately realize that is the title of one of my favorite books, written by Annie Dillard. Dean Fearing was the executive chef at the vaunted Mansion at Turtle Creek before leaving in 2007 to open his own restaurant, Fearing's.

The Quickfire Challenge, mercifully, doesn't have a Texas theme. Rather, it seems inspired by the very kitchen they stand in: take an old school "mother sauce" and put a twist on it. These sauces are classified in this manner not because they are a "mother" to prepare, but because they are the starting point for many other sauces. Saucemaking is one of the most important courses a chef-in-training takes at culinary school, besides Washing Your Hands 101. For those of you not in the know (that's most folks, I reckon), the mother sauces are Bechamel, Velouté, Hollandaise, Espagnole, and Tomate. In other words, cream gravy, cream of chicken soup, the stuff you put on Eggs Benedict, mushroom gravy, and Ragu.

The chefs draw knives for their sauce assignments and, with 90 minutes on the clock, commence to cooking. 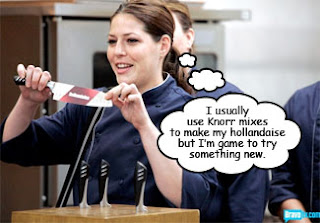 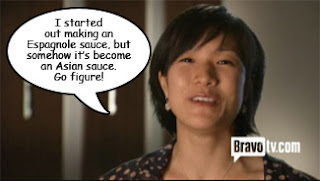 When time is called, Fearing and Padma do their tasting bit. Fearing has some powerful tastebuds. He's able to zing just about every other chef for not making a roux, or for not making a roux of the proper color, just by tasting the sauce. I'd be intimidated if I were these kids. I'm intimidated anyway. Sorry, Dean, while you seem like a really nice guy, I'll probably never invite you to my house for dinner.

He chooses Nyesha, Dakota, and Beverly to be his least favorite sauciers. Too bad for Nyesha, because she had been bragging that if she had to pick one position in the kitchen, it would be saucier. 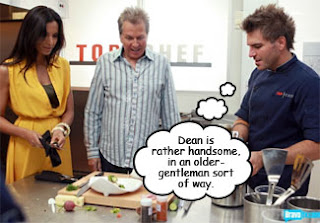 On top were Grayson, Handsome Chris, and Paul. While the guys' sauces were good, Grayson's Hollandaise was perfection, which gained her immunity in the next challenge...

...which involves steak. Because apparently they don't eat chicken in Texas.

The cheftestants are told that they will act as one team and prepare a four-course meal for 200 guests at the Cattle Baron's Ball, to be held at Southfork Ranch. The chefs break themselves into four teamlets, one for each course, and get to planning. Team Appetizer (Beverly, Dakota, and Sarah) decide to make a gazpacho; Team Second Course (Ed, Squinty Chris, and Paul) are doing a seared beef carpaccio; Team Entrée (Jor-El, Whitney (who?), and Nyesha) are making steaks; and Team Dessert (Heather, Grayson, Lindsay, and Handsome Chris) are making cake. Why are four people needed to make dessert? Or gazpacho, for that matter? Four blenders, maybe.

With $4000 in their pockets, the teams head to Whole Foods for shopping and eventually back to the kitchen for three hours of prep. 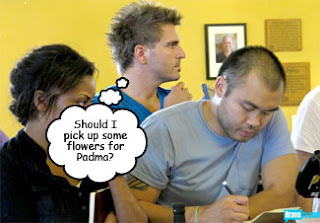 General Zod, who has two years of steakhouse experience under his belt, has taken charge of the steak course. But while he's prepping some bone marrow for Nyesha's compound butter, he stabs himself quite viciously in the hand with an oyster knife. He's all Mr Responsible and shit, so he gets a medic to bandage him up and promises to finish his prep before he heads to the ER for stitches.

The next morning, we see him trudging back to the apartment, four stitches in his left hand. He gets about an hour's sleep before he has to be up and at 'em and at the Southfork Ranch to finish prep and cooking for the meal. 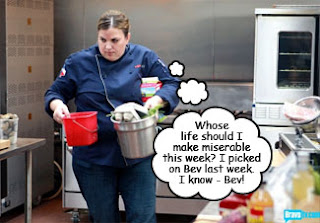 Once the chefs get to the Ranch, the show's incidental music suddenly becomes a unreasonable facsimile of the Dallas theme. For you whippersnappers who were born in the 90s, Dallas was an over-the-top nighttime soap opera about rich, big-haired, cowboy-hat-wearin' folk with too much money and not enough sense who happened to live on the Southfork Ranch in Dallas. It starred Larry Hagman, who was most famous for playing handsome astronaut Major Anthony Nelson on the 60s sitcom, I Dream of Jeannie. Tony Nelson. :::swoon:::

Anyhoo...in the Ranch kitchen, Beverly is working on deveining shrimp and Heather is all up in her face about it. Apparently, Heather is the bully of the group. She's the person I always strove not to be when I was growing up - the fat loudmouth know-it-all. So I failed, but at least I tried. It seems reasonable, however, that Heather is upset about Bev playing with shrimp because that's all she did in the three hours the previous day, too. But then we find out that there were 400 shrimp to peel, devein, and poach, and sympathy swings back to Bev's side. Only a little, because Bev's as annoying as Heather is bossy. 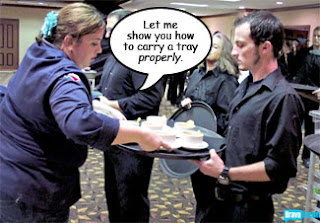 Eventually, the guests arrive. None look particularly Cattle Baronic to me, because they're probably not. It's just a random group of folks off the street that agreed to put on cowboy hats and cheap jewelry and eat steak while being filmed. Like the dumbasses last week, they probably thought they were auditioning for Real Housewives of Dallas.

The first course of gazpacho comes out and seems ok, despite not having as much watermelon flavor as advertised. It's a bit safe. Then the second course of seared steak carpaccio is presented. While the meat itself is very tasty, the dish as a whole doesn't have a point of view. 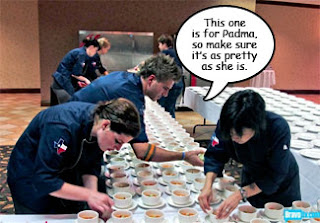 Meanwhile, outside, Kal-El is grilling steaks in the 112F heat. He's seasoning them with his sweat now, adding a finishing touch after the blood and tears from the day before. The idea is to get grill marks on the meat, and then fire them to medium-rare in the ovens just before the third course is to be served.

Heather has appointed herself and Lindsay as Queen Bitches. Linds is all worried that the steaks might need to be fired NOW, but when Ed puts them in the oven to help out, the end up being fired too soon. Some of the steaks end up too well done, while others don't get cooked enough. But what do you expect with 200 steaks that need to be cooked at the same time? Perfection, apparently. 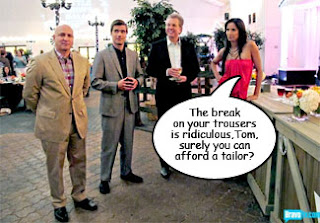 After all of the faux cattle barons and baronesses are fed and sent home, Padma calls Heather, Nyesha, and Squinty Chris to Judges' Table. Nobody is quite confident in their food, so these three don't know if they're in or they're out. After Padma tells them they are on top, they sigh in relief. The judges loved Squinty Chris' carpaccio, and Nyesha's compound butter (seasoned with Jor-El's blood). They also raved over Heather's cake, which apparently they did not notice was the same cake she made for the Quinceanara a few weeks back, from Ed's recipe. But it was good enough to get the bossy bitch a win, and the keys to this week's Toyota Sponsormobile, the Venza. 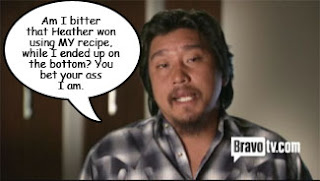 Then Ed, Whitney, and Kal-El are called to the table. Kal is a good guy and takes full responsibility for the steaks, not throwing Ed under the bus for firing some of them too early. Ed is dressed down for his carpaccio topping of tomatoes and whatnot. It's not "Top Chef" caliber, apparently, and he knows it. Finally, Whitney (who?) is taken to task for producing undercooked potato gratin, despite having six hours to cook it. And she is sent home. 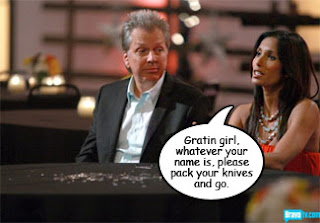 Next week: Heather and Bev get teamed up! Will there be bloodshed? Let's hope!