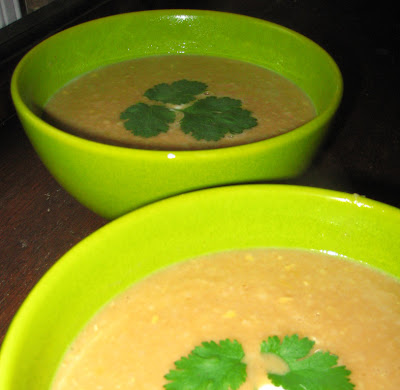 Mr. Minx here, filling in for Mrs. Minx who is on assignment.

One of my pet peeves about living in Baltimore is that it's very difficult to find yellow corn. Every supermarket or road side stand is chock full of white, sweet corn, but your ordinary yellow corn is virtually nowhere to be found. For my taste buds, white corn doesn't taste like anything except sweet whereas yellow corn tastes like - well, corn. I can only assume that stores carry white corn over yellow corn in this area because more white corn is grown in this area and people have been conditioned to like it. Heck, in this world full of high fructose corn syrup, it's not surprising that people are hooked on anything that is sweet, sweet, sweet.

Anyway, last summer I was thrilled to discover that a supermarket near my mother's home carried both white and yellow corn. Several times, when I visited the store on shopping errands for my mother, I would pick up several ears of yellow corn for the Minx and myself. I also told my mother about my preference for yellow corn.

"Well, I like the white corn," Mom replied. "because it's sweet."

I forgot about our corn discussion until I visited her on Mother's Day. Mom happily announced that there was a bag of corn in the refrigerator for me. "I got you some ears of white corn because I know how much you like it." I was shaken by annoying memories of my childhood. My mother always had a habit of transferring her personal tastes onto me. No matter what I said to the contrary, she would always buy what she liked assuming that I liked it too. I ate it because I had no choice. As an adult, when she would catch me eating something she didn't like, she would immediately accuse me of being some sort of fraud because I never liked that item before.

"Why are you eating okra?" she would exclaim. "You never liked okra!"

"Who are you and what have you done with my son?"

So I was left with seven ears of oh-so-sweet white corn. The Minx suggested making soup out of it so we could adjust the flavor as we pleased and mitigate the sweetness. She found two recipes that looked promising, and I chose to make Bobby Flay's chipotle corn soup.

Reading over the recipe, I knew that I had to make some adjustments. First of all, the recipe called for 1 1/2 cups of heavy cream. Since I only had about half a cup on hand, I had to find some other way to create richness. I decided to start with a roux made from 1/4 cup of extra virgin olive oil, a tablespoon of butter, and 1/3 of a cup of flour. Stirring the roux occasionally over medium high heat while I did other prep, I eventually got the roux to a milk chocolate color in about 15 minutes (the darker the roux, the more flavor). After adding the onions to the roux and cooking them until they were translucent, I added the corn and cooked the whole mix for another 3 minutes. Without 6 cups of chicken stock as the recipe stated, I opted to dissolve two chicken bouillon cubes in six cups of water. Finally, I poured the liquid over the vegetables and roux, leaving it to simmer for 30 minutes.

While it was simmering, I added in the seasonings. The recipe calls for 1 tablespoon of dried chipotle chili powder, which I dutifully added but I would not recommend because the resulting flavor is incendiary. (The Minx adds: IN.CEN.DI.ARY.) Perhaps with the 1 1/2 cups of heavy cream, it's not so bad, but using my method, the soup had a real mouth numbing quality. I would recommend starting with a teaspoon and slowly adding more depending on your heat preference.

Once the soup had finished simmering, I took a hand blender and whizzed it to a fine mush, adding some heavy cream to lighten the color and give it more body. Of course, the recipe asks that you whir it in the blender and push it through a strainer, but I didn't feel the need to be fancy. Besides, I like the little bits of corn skin in the soup. Please note: the recipe calls for four ears of corn, and I used all seven that Mom had given us. Despite that, the flavor wasn't all that corn-y. However, after tossing in some fresh cilantro and sour cream, the soup tasted pretty wonderful. Along with some buttered bread, it was hearty enough to eat as dinner.

I'd like to try this recipe again with less chipotle and yellow corn. 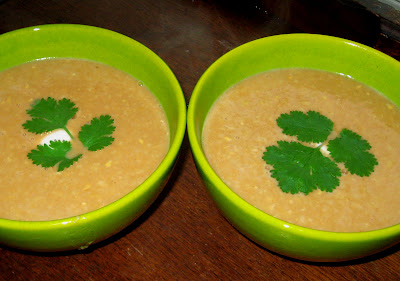