Huitlachoche, or corn smut, is actually a fungus that attacks corn. In most cases, farmers destroy affected crops; whoever thought to eat it must have been desperately hungry, because it's not pretty. Although unattractive, huitlacoche has a pleasant, mild, mushroomy flavor and is considered a delicacy in Mexico. The first time I tried it was in a quesadilla at Blue Agave. The amount of corn smut in the appetizer seemed fairly paltry, but it was enough for me to taste its fungal goodness and left me curious to try more.

Recently, I discovered Goya canned huitlacoche at the Shoppers in Perring Plaza. I thought it would be nice to recreate those quesadillas and explore the "Mexican truffle" at home. 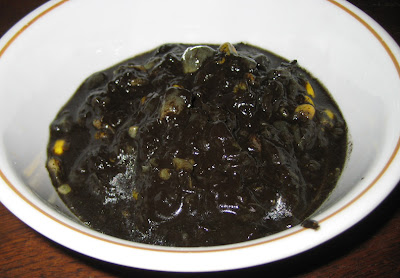 One look at the canned product was almost enough to change my mind - it's like something out of a diaper, black and viscous and studded with corn kernels. Or maybe chocolate pudding in Japan (they put corn in the weirdest things.) Before I tossed out the lot, I read the label and found the fungus had been canned with oil, salt, and onion. The best thing to do, I decided, was to give it all a nice rinse and drain to get rid of the black glop. 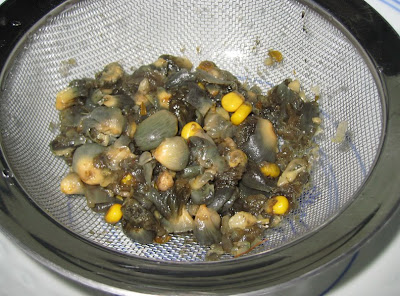 There. That's better. Ok, maybe not prettier, but it does look more like mushrooms. Maybe a bit like those funny straw mushrooms one finds in some Asian dishes. You know - the ones that look like wee mutant penises.

Since there was already corn involved, I added more corn to my dish, along with three kinds of cheese (Cheddar, Muenster, and Mozzarella, because they were what we had on hand), and some sautéed onions for sweetness. I fought the urge to sauté some mushrooms because I didn't want to detract from the huitlacoche's subtle flavor. 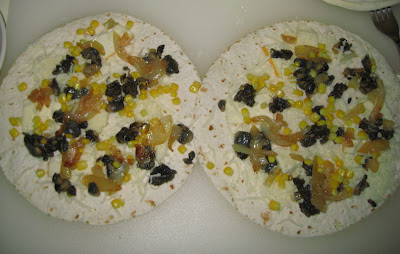 That was a good decision, as the fungus tasted a lot like regular mushrooms, albeit with an unusual added herbaceousness. Topped with some fire roasted tomato salsa and cilantro from our garden, these quesadillas made for a yummy supper. 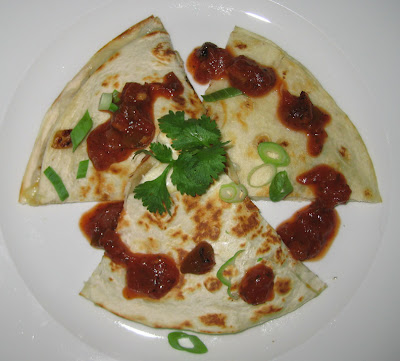 Have you tried huitlacoche? Would you, now that you've seen the stuff? I recommend trying it in a restaurant first to get the flavor before playing with it at home, especially if the graphic appearance is a turn off. It almost was for me, but I'm glad I used it. Now to find other recipes....
Posted by theminx

You are a brave soul. I think I'll take your advice and try it in a restaurant first. It does look like diaper contents!