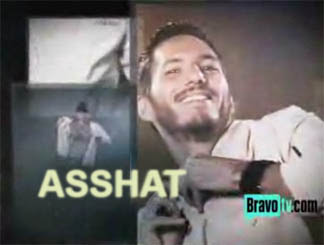 The Legend of the Asshat
In the land of Bravo there is a young man named Evangelos Mendelsohn, also known as Spike for his incredible resemblance to Snoopy's brother from Needles. 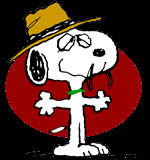 Spike is a cheftestant on a reality television program called Top Chef and after nine weeks' time, he still has not won a challenge. 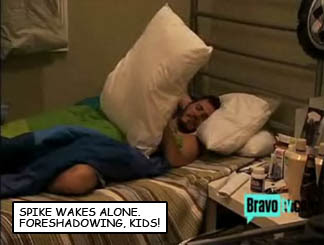 Instead, he chooses to spend his time inciting arguments in the Glad Family of Products Commemorative Storage Room and complain about his fellow cheftestants. Today he chooses to exhort Dale. 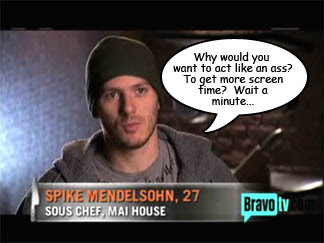 A lightbulb goes off. 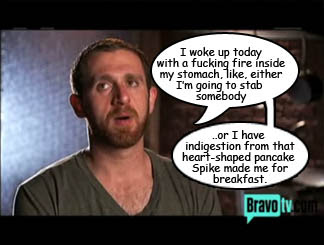 Meanwhile, Spike's paramour, Andrew, is energized and still very excited to be on the show.

On this auspicious occasion of Week Ten, Spike and the other cheftestants gather in the Top Chef kitchen to await their first assignment of the day, otherwise known as the Quickfire Challenge. This week's guest judge is hottie loser from Season Two, Sam Talbot, who has finally found employment in the far reaches of Montauk after lo so many months since packing his knives and leaving the show himself. He's tall, dark, and handsome AND can cook, so the cheftestant called Antonia wants to know where to sign herself up for a piece of that action. 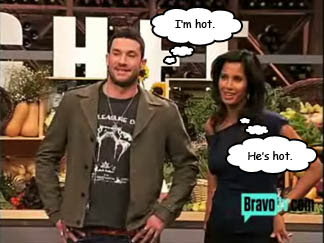 The Quickfire Challenge this week is to put the sexy back in salad. No, not by chopping Justin Timberlake in tiny pieces and tossing him with lettuce (although that has long been a fantasy of mine, and because there's absolutely nothing sexy about that prancing nerd) but by creating a new classic that makes Padma and Sam swoon. After 45 minutes of slicing and dicing, tasting ensues and Sam picks his least and most favorites. Richard, Lisa, and Stephanie end up on the bottom. Spike, Antonia, and Dale are on top. 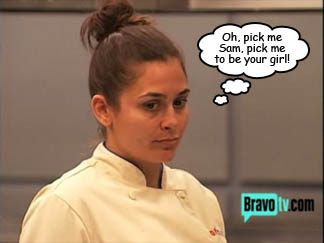 Antonia tucks the fork Sam used into her pocket to fondle later and hopes that her poached egg and wild mushroom salad turned him on. But alas, not as much as Spike's salad. There is much jubilation as he is named the winner of the Quickfire Challenge. Well, Spike's pretty happy about it. Padma reminds him that although there is no more immunity for QF winners, he will have a substantial advantage for the Elimination Challenge to come. 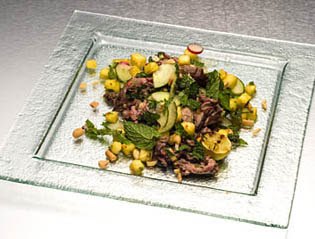 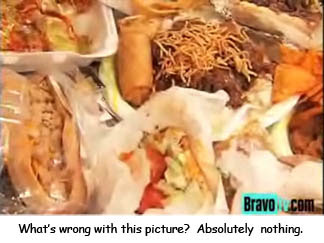 For that challenge, Sam and Padma bring out a large tray full of lunchtime delights - steak subs, sandwiches, fries, etc. These are the typical lunches of the Chicago Police Force Cadets. The cheftestants pretend to be offended by the dripping grease but secretly wipe the drool from the corners of their mouths as the Elimination Challenge is given: create gourmet boxed lunches using one ingredient from the categories of whole grains, lean proteins, fruits, and vegetables. Spike's advantage in this challenge is that he gets an additional ten minutes to shop, plus he gets to choose one ingredient from each category that the other chefs are not allowed to use. 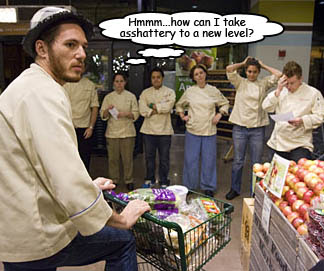 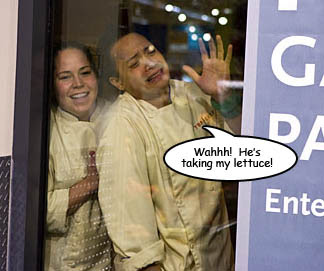 Spike has decided to make chicken salad and serve it with lettuce, tomato, and bread. By doing this, he has effectively eliminated any chef's ability to make either a salad or a sandwich as their lunch. He laughs evilly. Andrew comments that he understands why Spike has (maybe not so) suddenly turned to the Dark Side. 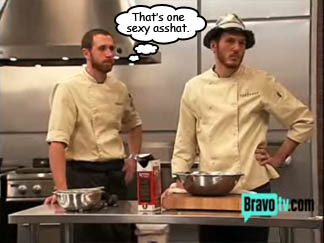 The next morning they have two hours to prepare and pack their foods for delivery to the Chicago Police cadets. During this time, we see the cheftestants complain about their fellow competitors. Antonia, still bitter that she did not win Sam's heart, seems peeved that Dale only cooks Asian food. Andrew points out that Lisa's shrimp is high in cholesterol but she's adamant she's following the rules. Meanwhile, he's chopping parsnips and pine nuts to use as rice in his version of maki rolls. Tom comes through for his regular Sniff 'n' Sneer around the kitchen. 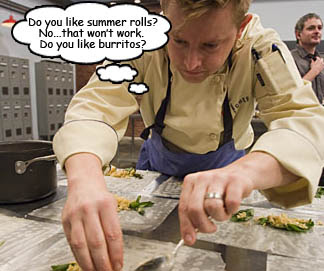 With just a few minutes left, Lisa discovers that the flame has been turned up under her brown rice, burning the outside and leaving the inner portion undercooked. She smells sabotage. Everyone else smells burnt starch. Finally, ye old cookery is done. The chefs package up their lunches into individual portions and cart them off to the Police Academy. 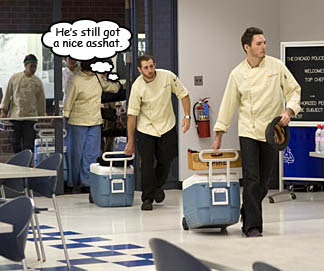 Once there, they attempt to tempt the cadets into eating their lunches. 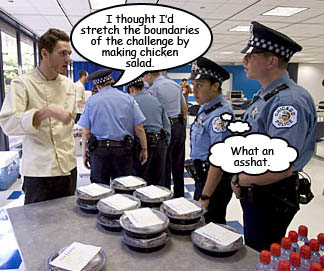 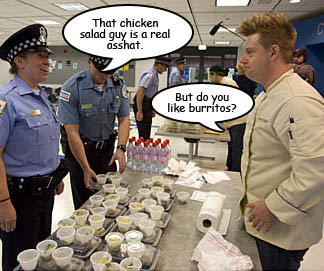 The judges try each of the lunches as well. After lunch, everyone goes back to face the wrath of Judges Table. The cheftestants wait in the Glad Family of Products Commemorative Storage Room while Tom, Padma, Sam, and Ted Allen dissect their meals. 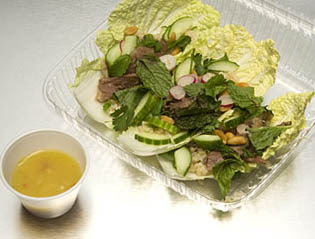 Dale and Stephanie are brought out first. The judges liked their beef lettuce wrap and meatball soup the best. What? LETTUCE wraps? Wasn't that one of the verboten ingredients since Asshat chose to use it? Calm down. Dale's not stupid, yo. Let him grab his crotch and inform you that his "lettuce" was actually Napa cabbage. So there. And it was yummy, so he won the challenge, a ginormous bottle of Rutherford Hill 2002 Merlot, and 2 tickets to visit the winery. Double so there. 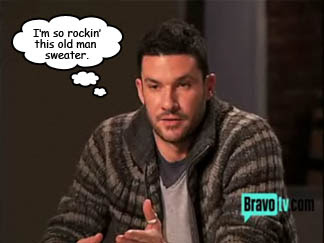 Then the chefs with the least favorite dishes are brought out. Andrew didn't use a whole grain, as Lisa was delighted to point out. It also wasn't hearty or substantial enough. When Andrew got defensive about the nutritional value of it, Tom told him it just wasn't good.

Then Spike was questioned about his choice of chicken salad, and his underuse of the bread, tomato, and lettuce he chose. Tom didn't like the combination of olives and grapes, and Spike was all, "what about sweet and salty don't you understand?" He's lucky Tom didn't jump over the table and bitch slap him for that. I would have. 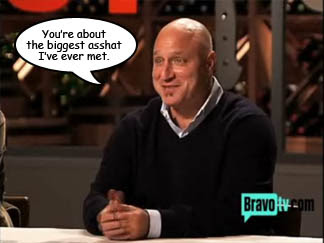 Lisa's undercooked rice was noticed by the judges, and they said her "stir fry" didn't really fit the definition. Not only that, the shrimp were undercooked.

"But but but...I was sabotaged!" she cried. The judges didn't buy it.

After a bit more deliberation, the judges thought Andrew had made the most egregious errors and asked him to pack his knives and depart the Top Chef Kitchen with his tail between his legs. But first he hugged Spike tightly, proclaimed him "the man," and promised to "hook up" with him back in New York.

In the meantime, Spike the Asshat is alone again. Naturally. 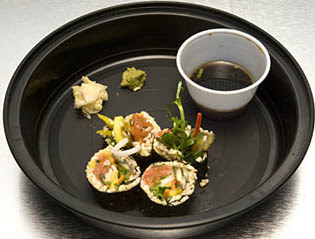 Maybe this is enough food for a yoga instructor's lunch, but definitely not for a police cadet.
Posted by theminx

Great Asshat (& Andrew) review - he does look like Snoopy's 'Spike'!

btw, if you own a Wii game system, I have a review of their new Top-Chef-y game ''Order Up''

Have a great weekend!

My sister pointed out not too long ago that Spike always whines about how stupid Rich is, and how in team challenges he never wants to be on his team because he's sooooo fabulous. Does it ever occur to Spike that he might want to get on Rich's team more often? The guy knows how to win! Mostly, at least. And he almost always does better than Spike.