The show opens with Andrew comforting Spike over Mark's departure. Spike quickly dries his tears and offers Andrew the now-free spare bed in his room. 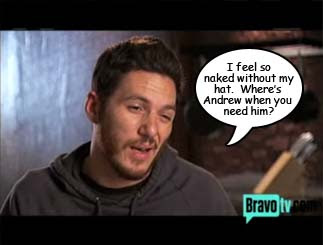 In the Top Chef kitchen, the cheftestants find Tom standing alongside Padma, who introduces him to them as if they never met. Padma must be back smoking the weed again! She delivers the bad news that there will be no more immunity for Quickfire Challenges. And this week, both challenges will be favorites of Tom's - in other words, no fun at all. For the quickfire we have the mise en place relay race. The chefs choose knives to determine who is on Team Fork and who is on Team Spoon. 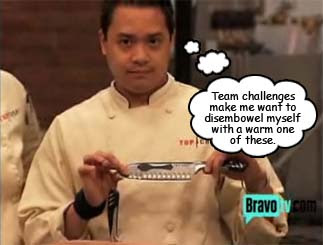 The challenges are to peel and supreme five oranges, turn two artichokes, clean and filet a monkfish, and make a quart of mayonnaise. 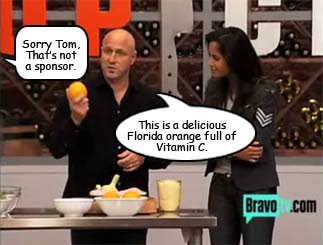 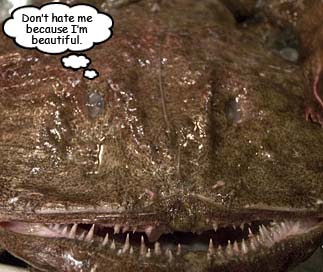 Team Can't Lose Fork (Richard, Andrew, Stephanie, Antonia) have no problems deciding who will do what, but Team Whiner Spoon (Dale, Nikki, Spike, Lisa) is all, "OMG I don't want to do that, it's like hard!" Poor Dale, seemingly the only competent chef on his team, wants to ask his teammates, "why are you still here?" After reluctantly choosing tasks, the race begins.

Lisa smokes Antonia in the orange segment (heh). Spike gets a good start on the artichokes but Andrew catches up and they tie. Richard and Dale tie on battle monkfish, and Stephanie beats Nikki in mayonnaise-ing. Team Can't Lose Fork wins! Dale is pissed and bangs a pan or something against an appliance, shouting, "f*ck!" which is so not bleeped. Didn't catch that one, eh Bravo?

Padma pats Dale on the head and gives him a cookie to calm him down and then asks the chefs if they remember Restaurant Wars. Of course they do - it's been one of the most contentious battles for the last three seasons! This year, however, there will be no battling restaurants. Instead, the teams have to make wedding food based on the tastes of the happy couple. Who are getting married...the next day. 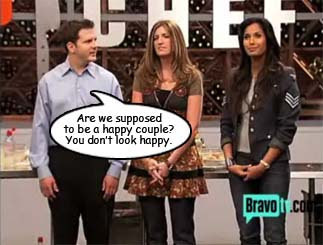 Corey and JP have a catering and wedding venue of their own, so they're bound to be picky. And there's always the chance for a bride to be Bridezilla. Despite that, Team Can't Lose Fork picks to work for the bride. She's a meat-and-potatoes kinda guy, while the groom likes Italian food. After meeting with the happy couple, the chefs have 45 minutes to plan and one hour to shop at Whole Foods and Restaurant Depot with a $5000 budget.

Richard and Andrew head to Whole Foods to pick up, of all things, flowers. Steph and Antonia go meat shopping. 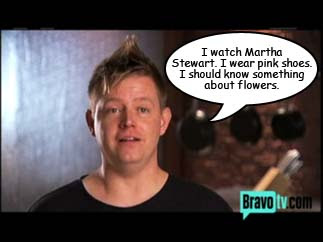 Who's the metrosexual now, Ryan?

Andrew has a culinary boner knowing he has to work all night long to get the job done. Thanks for sharing. 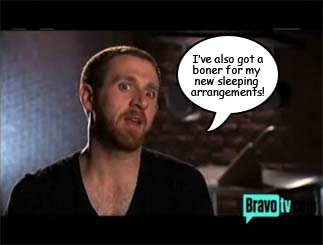 Once the chefs start cooking, it's clear that Dale is completely disgusted with Team Whiner Spoon. He's decided he's the only chef who can do everything, so that's what he attempts to do: everything. The other whiners on his team whine that he's putting his finger into too many pots and he's not doing anything properly, except, perhaps, whining. But nobody is stopping him or offering assistance, either. Nobody really likes each other. Nikki had a meeting of the minds with their client JP but she refuses to take the leadership position for the team. Spike decides to pick one thing and do it well, that way he can only be blamed for messing one dish up. It's a clusterf*ck, basically. 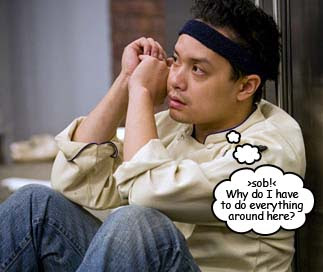 Meanwhile on Team Can't Lose Fork, Richard takes the lead position and cooks the meat. Andrew grouses a little, but he's a bottom so he's secretly pleased. Stephanie tackles the chore of creating a multi-tiered wedding cake. Antonia makes all of the appetizers. It's a well-oiled machine, even if everyone is dead tired. 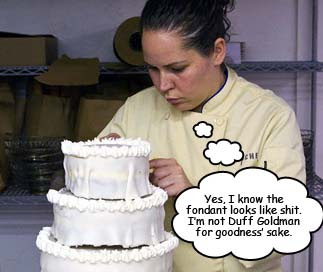 The next day, after working all night, the chefs load up their food and take it to the wedding venue. Famed pastry chef Gale Gand of Chicago's Tru is guest judge for the wedding wars and we see her and the other judges gussied up in their Sunday best crash the wedding so they can taste the food. 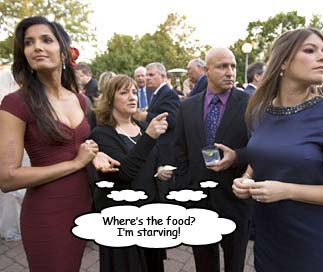 The appetizers all seem to go over pretty well, except for the tooth-shatteringly hard bruschetta (that's pronounced broo-sketta, Lisa, not broo-shetta, btw) that Dale toasted far too much in advance. And Nikki's pizza doesn't get as many compliments as Antonia's.

But pizza's not enough for our hungry judges, so they stampede inside for the buffet dinner. In the meantime, the bride changes out of her plain unadorned strapless gown into a lacy strapless gown with a puffed skirt perfect for catching crumbs. Free food courtesy of Bravo means more money for Badgley Mischka!

Andrew is put in the kitchen to work on hot food. "He's not allowed to talk to the guests," says Antonia. Guess she doesn't want everyone to find out about his culinary boner. Dale takes kitchen duty too because he likes to be a martyr and complain about it. 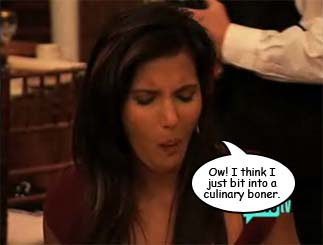 Team Can't Lose Fork's food is lip-smacking good. The judges rave over the brisket, but they're not excited about the creamed spinach or the chicken dish, both prepared by Andrew. Tom declared the latter the worst thing on his plate.

After dinner, the chefs pack their tired asses up and head to the Glad Family of Products Commemorative Storage Room for a montage of yawns. Team Can't Lose Fork is summoned to Judges Table first and complimented on everything made by Antonia, Richard, and Stephanie. Tom calls Andrew out on making basically the same chicken dish he made for the previous challenge. "Except that one was better," chimes in Gail. Gale Gand gives Richard the win for taking charge and handling a lot of the responsibility, but he turns around and gives the win to Stephanie for her wedding cake feat. There's no argument from the judges and so Steph gets a $2000 gift certificate to Crate and Barrel. Which explains the shot of Crate and Barrel boxes adorning the wedding venue. 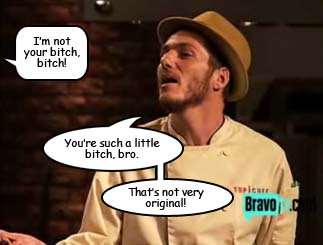 Team Whiner Spoon is called out and ripped apart. Lisa fares well and gets compliments on her tasty but ugly battleship-shaped chocolate hazelnut groom's cake. Nikki denies being the executive chef for the group. Dale swears he worked his patoot off for the team. "Straight out hustled." Spike encouraged him to point fingers, because Spike's a non-confrontational kinda guy. (It's looking like there's no potential for bromance there.) Lisa smirks. And finally the moment of truth: Nikki is asked to pack her knives. I whoop in joy because she's finally gone. 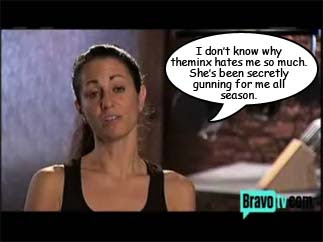 Cuz you gotta be able to cook more than Eye-Talian food to be a winner, Nikki. And apparently you can't even do that so well, huh? (Next I look forward to Lisa's departure.)
Posted by theminx

I LOVE that you called them "Team Can't Lose"! There wasn't a chance in hell that Nikki & Co. were going to win that challenge.

Thanks for the laughs, Minx!... even that fish was smiling.

Tho looking at it makes me wonder what the monk looked like so that they named -that- fish for him. Poor guy.

But yes...Lisa next week. That would be nice. Although, they make Spike look pretty evil in the promos...

David and I don't *always* agree. Maybe Andrew is ambidextrous that way. :)