Last year's grillin' and chillin' chez Dad was so successful, we did it again this year. It sure beats deciding on a place to eat. In my family, that goes a little like this:

"Dad, have you decided where you want to go?"
"Oh, I haven't had time to think about it. What do you think?"

It always comes back to me. I always get to make the food decisions. It would be fine if I picked a restaurant and then everyone agreed, but I have to keep in mind that my brother is always on the Atkins diet, and while Dad enjoys ethnic cuisine, it's not always his first choice. My brother prefers to eat dinner later, whereas Neal and I are pretty conditioned to eating early. If I suggest dinner before 7 there are grumbles, and if I suggest we eat later, there are other grumbles. And if I'm going to put my hard-earned money down on food, especially for an occasion, I refuse to eat the fodder of the masses at a chain restaurant like Outhouse Steakback or Dead Lobster, so that cuts out more than half the restaurants in Maryland.

Eating at home is easier.

I made slightly less food this time - just one package of baby backs (three racks). Instead of the marinated flank steak, we went to Ceriello's and bought a nice big dry-aged sirloin steak that I schmeared with three cloves of smashed garlic and a little soy. Their Italian sausage looked good, so we tried the version with garlic and sundried tomatoes. Neal and I collaborated on an Asian pesto noodle salad, using great handfuls of basil and two little jalapenos from our garden. 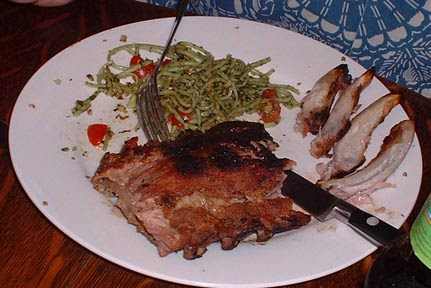 Our token vegetable was corn on the cob. It's hard to find anything but white corn in Maryland. Someone has convinced the general public that corn should taste of sugar and nothing else. Personally, I prefer it to taste of corn, so I like yellow corn better. We found some corn with mixed yellow and white kernels, but it was still fairly insipid. Everything else was amazing though. The steak, cooked perfectly medium and allowed to rest for a nice long time, was flavorful, slightly garlicky, and like buttah. I used my usual Alton Brown baby backs technique, so they were predictably fabulous, and the new Smith and Wollensky bbq sauce we tried gave them a nice tangy edge. (It's a bit like a marriage of regular sweet bbq sauce and Heinz 57.) The pesto salad, made with spinach soba and garnished with chopped green onions, was a festival of green color and allium flavors. 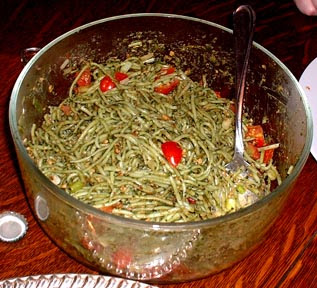 Dessert was homemade coconut cream pie. I got the recipe from an episode of America's Test Kitchen. It was supposed to be more coconutty, because there was coconut milk in the custard. Neal doesn't like grated coconut, comparing it to plastic shavings, so I thought this would be a good recipe to try. Those of us who like plastic shavings could always pile it on our individual slices as garnish.

Despite the 5 egg yolks, the pastry cream seemed a bit thin to me. The pie wasn't runny, but the filling was loose enough to make slice removal difficult (despite nearly 24 hours of refrigeration). The coconut flavor was there, but it was not impressive. The original recipe calls for shredded coconut in the filling as well, so that may help. In addition, the crust was crumbly, and a tad too sweet.

We served it with Reddi Whip, since I was too lazy to make whipped cream from scratch and felt it would collapse before we got a chance to eat it, and a nice handful of shredded coconut (except for Neal). Because Dad loves pina coladas, I put slices of fresh pineapple on the plates as well. A shame I didn't get a pic....

1. For the crust: Adjust oven rack to lower-middle position and heat oven to 325 degrees. In food processor, pulse animal crackers, coconut, and sugar to fine crumbs, eighteen to twenty 1-second pulses; then process until powdery, about 5 seconds. Transfer crumbs to medium bowl and add butter; stir to combine until crumbs are evenly moistened. Empty crumbs into 9-inch glass pie plate; using bottom of ramekin or 1/2 cup dry measuring cup, press crumbs evenly into bottom and up sides of pie plate. Bake until fragrant and medium brown, about 15 minutes, rotating pie shell halfway through baking time. Set on wire rack and cool to room temperature, about 30 minutes.

2. For the filling: Bring coconut milk, whole milk, 1/2 cup sugar, and salt to simmer over medium-high heat, stirring occasionally to ensure that sugar dissolves. Following illustrations 1 through 6, whisk yolks, cornstarch, and remaining 1 tablespoon sugar in medium bowl until thoroughly combined. Whisking constantly, gradually ladle about 1 cup hot milk mixture over yolk mixture; whisk well to combine. Whisking constantly, gradually add remaining milk mixture to yolk mixture in 3 or 4 additions; whisk well to combine. Return mixture to saucepan and cook until thickened and mixture reaches boil, whisking constantly, about 1 minute; filling must boil in order to fully thicken. (To determine whether filling has reached boil, stop whisking; large bubbles should quickly burst on surface.) Off heat, whisk in butter and vanilla until butter is fully incorporated. Pour hot filling into cooled pie shell and smooth surface with rubber spatula; press plastic wrap directly against surface of filling and refrigerate until firm, at least 3 hours and up to 12 hours.
Posted by theminx