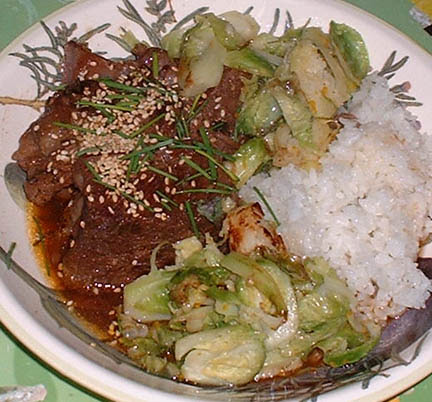 So short ribs might not seem like a good choice for a Spring meal, but when the temps are in the 40s and it's a gloomy, rainy, and windy day, they are perfect. I wanted something Asian-exotic this weekend, but with our favorite Korean and Thai restaurants MIA, and the weather being so crappy, we didn't feel like venturing out of the house. I had picked up a couple packages of ribs on our last visit to Wegman's and decided to try out the Korean style short ribs recipe from the March 2007 issue of Gourmet.

They were pretty easy - marinate for 8 or more hours, cook without searing. I only had 4lbs of short ribs, but used the same amount of marinade, which was barely enough. They smelled wonderful while cooking, very much like galbi, and they tasted good too...although not as sweet and garlicky as they should have been. As the recipe was so simple, I'll definitely make it again, although I think I'll go for much more garlic and probably another quarter cup or so of brown sugar. The three cups of water for braising was a bit much as well; perhaps a cup of beef stock paired with a cup of soy would be more flavorful. Or, I might borrow some ingredients from David Chang's recipe. 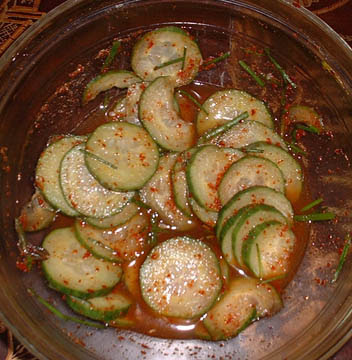 To accompany the ribs, I made rice (of course). I also whipped up a bit of cucumber pickle (hothouse cucumber, salt, Korean red pepper, sesame oil, rice wine vinegar, a pinch of sugar) and a decidely un-Korean side of sliced Brussels sprouts sauteed in olive oil and garnished with orange zest. The cucumbers were hotter than the ones from Purim Oak; the pepper caught in the back of the throat a bit. And we love Brussels sprouts, so we think they go with everything. I would usually sprinkle them with some Golden Whisk Star of Siam oil, but that's on the spicy side and I figured the cucumbers would provide enough of the spice element. But I still wanted something citrusy, hence the grated orange rind.

Transfer ribs to a wide 6- to 8-quart heavy pot and add water and ginger. Simmer, tightly covered, until ribs are very tender, about 3 hours.

Transfer ribs to a platter using tongs and keep warm, covered with foil. Skim fat from sauce and pour sauce through a sieve lined with a dampened paper towel into a bowl, then discard solids. Serve ribs with sauce in shallow bowls and sprinkle with reserved scallion greens and remaining sesame-seed powder.
Posted by theminx