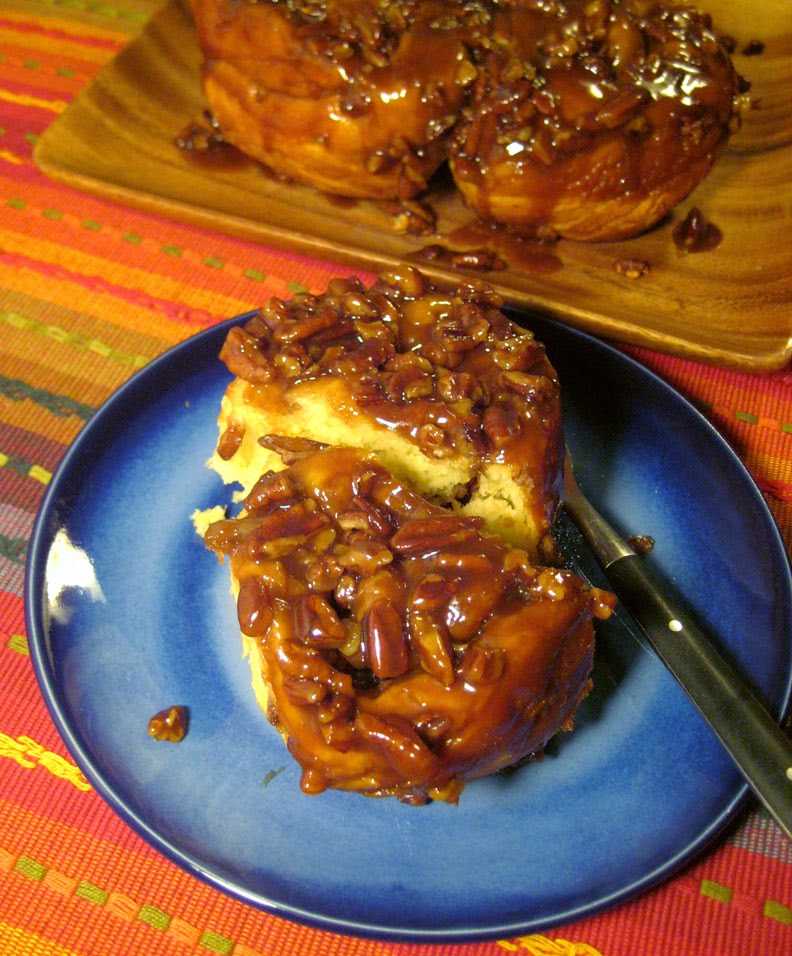 A few years back, my friend Kate and I would make a regular pilgrimage to South Jersey to get haircuts. Yes, that is a long way to travel from Baltimore, and yes, there are hair stylists in this town, but we enjoyed the road trip. That, and the visit with our stylist, Karen, who, along with her husband, are personal friends.

On the way to Jersey, we'd have to make at least one pit stop, preferably at one of the rest stops in Delaware. We'd hit the Starbucks for coffee and Cinnabon for a decadent cinnamon roll. It was during these every-6-to-8-weeks road trips that I realized something.

It's the cinnamon thing. While I like cinnamon just fine, especially when it's part of a blend of spices, like in pumpkin pie or chai, I'm not so fond of it when it's used by the cupful. Bagels and other pastries encrusted in a layer of gritty cinnamon isn't my thing. And neither are cinnamon rolls.

Sticky buns are another thing entirely.

Give me a brioche-style pastry coated in sticky goo and nuts, and I'm a happy girl. I love the sticky buns at Au Bon Pain, but they have over 800 calories each. Ouch. They are a rare treat, eaten on days when I don't plan to have lunch, and dinner is going to be light (that means almost never). I got it in my head recently that I wanted to try baking my own sticky buns. Not that they'd have less calories or anything. I've been getting over my fear of baked goods, and watching the Great British Baking Show on PBS made me want to try something more challenging than my usual brownies and chocolate chip cookies. So I found a recipe I thought sounded good and altered it to my tastes. Not just pecan sticky buns, my additions of maple syrup, bacon, and bourbon make them a little more savory and slightly less sweet than traditional sticky buns. They're great for breakfast or dessert, or hell--even dinner.

They do have a bit of cinnamon in the filling, but it's barely enough to notice. It just rounds out the flavor a bit. 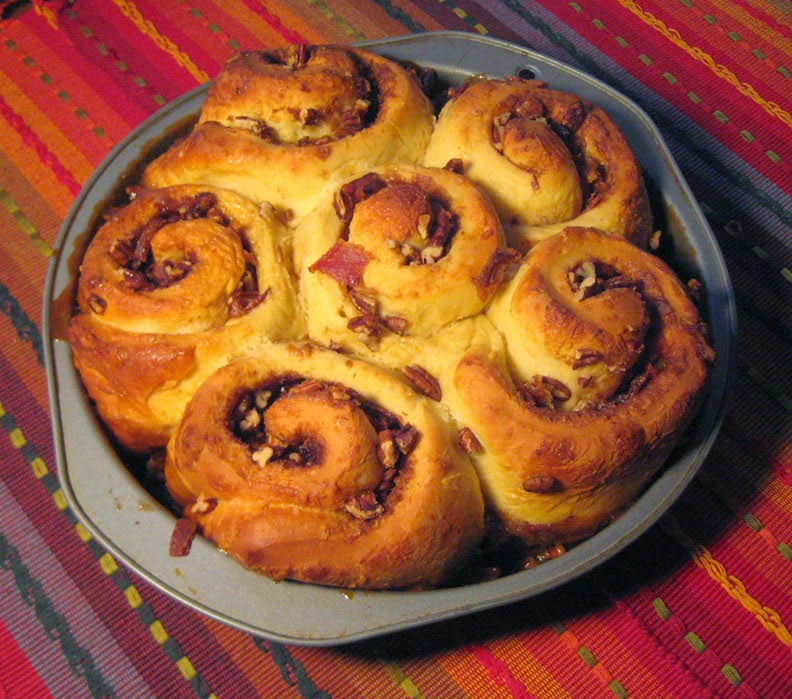 Preheat oven to 350°F. Bake buns until puffed and golden, 30-40 minutes. If they brown too quickly, cover with foil. To ensure the buns are cooked, use an instant read thermometer to measure the internal temperature, which should be around 180°F. Let buns cool for a couple of minutes, then place a platter a couple of inches larger than the pan over the buns. Carefully invert the pan onto the plate. The buns should slide right out. Spoon any sauce that remains in the pan over the buns.

Put the milk in the bowl of a stand mixer fitted with a dough hook. Combine the yeast and sugar and stir into the milk. After five minutes or so, the liquid should appear foamy or thickened. Add the melted butter and eggs and stir to combine. Add the salt and flour. Turn the mixer on to low and beat until a dough forms, scraping bowl down as necessary. Turn the speed up to medium low and knead dough for 5 - 7 minutes, until it pulls away from the side of the bowl cleanly. The dough will be sticky.

Remove the dough and pat it into a ball. Dribble a little bit of oil into a bowl, and put the dough ball into it, rolling it in the oil to coat. Cover the bowl and allow dough to rise until doubled, 1-1 1/2 hours.

While dough is rising, make the sauce.

Melt the butter in a heavy saucepan over medium heat. Stir in remaining ingredients. Bring to a boil, then reduce heat to medium low and simmer until golden brown, five minutes or so. Pour sauce into 9" round baking pan, swirling the pan so the sauce also coats the sides. Put the pan in the fridge until the dough is done.

Combine brown sugar and cinnamon in a small bowl. Remove the pan with cooled sauce from fridge and sprinkle with half the pecans. 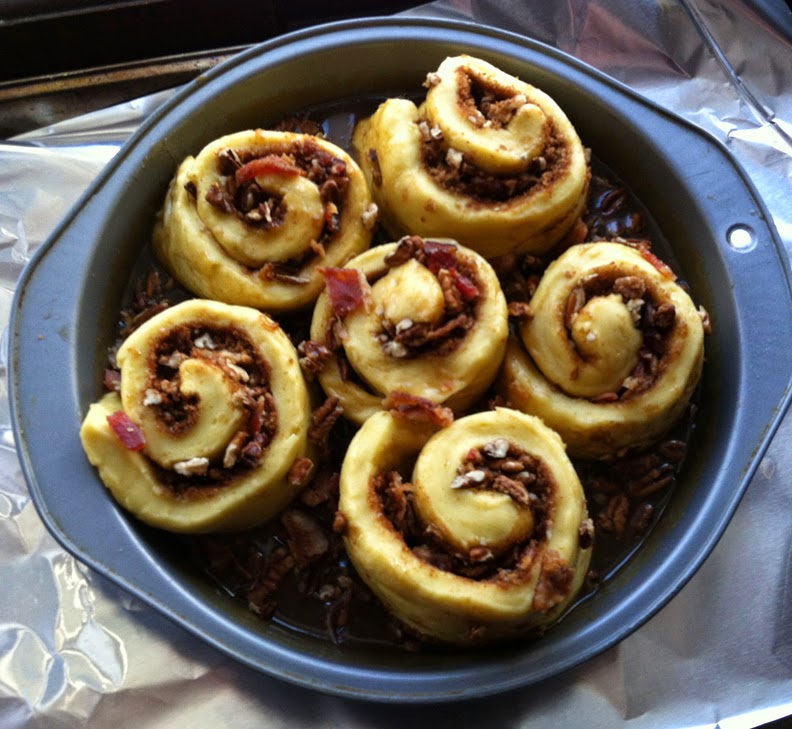 Put the dough onto a floured work surface and roll into a 9" x 12" or so rectangle. Using your fingers, smear the softened butter evenly over the dough, then sprinkle on the filling, followed by the rest of the pecans and the bacon. Roll the dough into a tight loaf. Gently slice the loaf into 6 evenly sized pieces using a serrated knife. Arrange buns over the pecans and sauce in prepared pan. Cover with a tea towel and allow buns to rise at room temperature for another hour or two, until they are crowding each other in the pan. You may also refrigerate the pan at this point and bake the buns the next day. Make sure to remove the pan from the fridge an hour before you want to bake the buns. 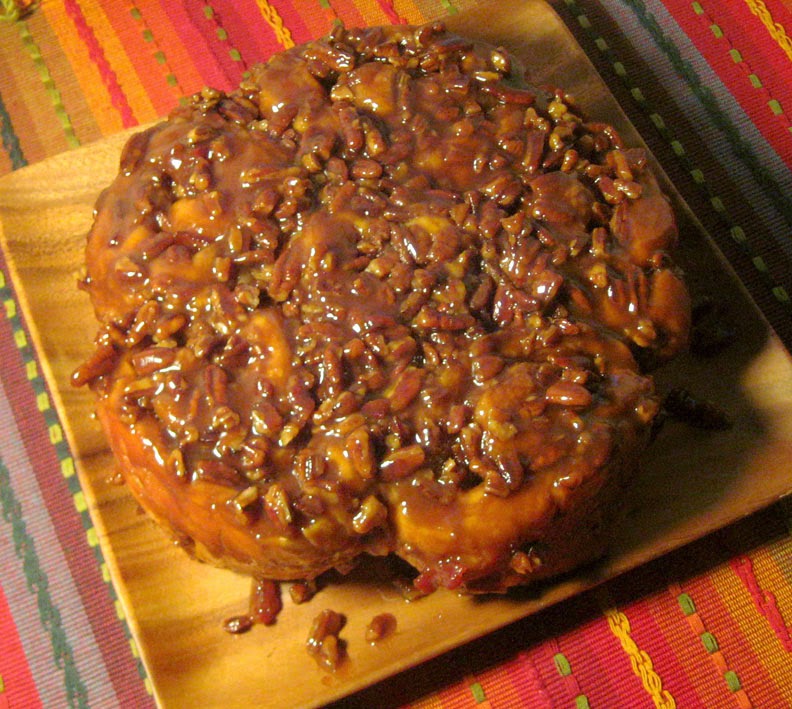