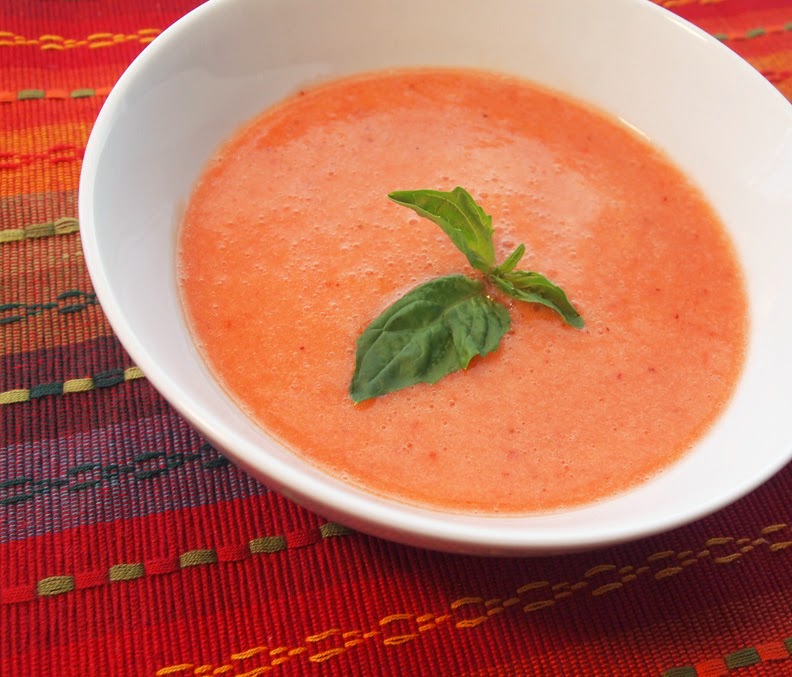 Spring has sprung, which means it's rhubarb season. And in the Casa de Minxeats, we do make a valiant attempt to eat as many fresh fruits and veggies as we can. Personally, I have no problem eating something completely vegetarian (or even vegan) for dinner, like a whole steamed cauliflower topped with nothing but salt, pepper, and butter, but you know Mr Minx likes to eat more substantially. Even if we're not doing our typical meat-and-potatoes meal, we're eating something closer to veggies and potatoes, or more likely, veggies and pasta (but I do like to sneak in some quinoa now and then). Sometimes I'll throw together a seasonal vegetarian appetizer, like roasted asparagus, as a starter for our meal, rather than eating veggies as merely a side dish.

I found this recipe for a lovely soup made with rhubarb and strawberries on the Eating Well web site. It's super simple to make, very slightly savory with the salt, basil, and pepper, and completely refreshing. While it's very spring-like, it would be a perfect summer recipe, too, especially as one can find frozen rhubarb these days (and some supermarkets carry it at the oddest times of year).

Speaking of rhubarb, the title of this post may remind those of you of a certain age about a particular Jan Brady rant ("It's always..."Marcia, Marcia, Marcia!'"), but it has another, very different, showbiz connotation. Because the word "rhubarb" doesn't have any recognizable phonemes, it was often used as crowd scene "conversation" in old films. Overlapping layers of the sounds of "rhubarb, rhubarb, rhubarb," sounds more like actual chatter than having people just say something like, "blah, blah, blah," and certainly is a lot less effort than coming up with actual conversation.

Sometimes I wish I could do that in real life. 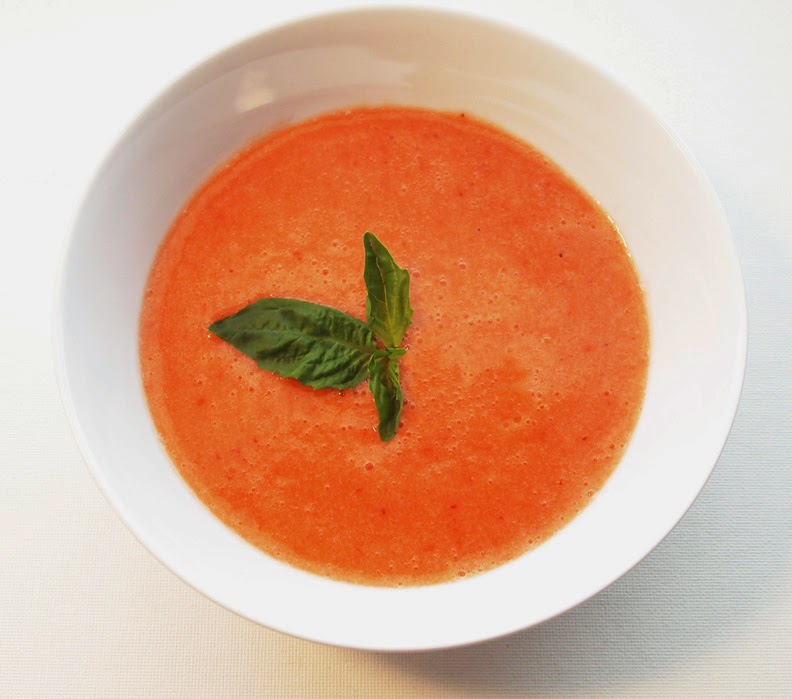 Bring rhubarb and 3 cups water to a boil in a large saucepan. Cook until the rhubarb is very soft and broken down, about 5 minutes. Transfer to a medium bowl. Put a couple inches of ice water in a large bowl and set the bowl with the rhubarb in it to help cool it quickly. (If you aren’t in a hurry, you can skip the ice-water bath.) Refrigerate, stirring occasionally, until cool, at least 20 minutes.

Transfer the rhubarb to a blender. Add strawberries, sugar and salt; blend until smooth. Return to the bowl and stir in 1/3 cup basil (or mint). Serve sprinkled with more herbs and a generous grinding of pepper.