We were invited to a media brunch at Nickel Taphouse featuring Salisbury, Maryland's Evolution Craft Brewery beers. How could we turn that down?

Nickel Taphouse has a little bit of everything available at their brunch, from oysters and mussels to the usual breakfast-y and lunch-like dishes. The four of us at our table focused on breakfast-style dishes, with a couple additions. 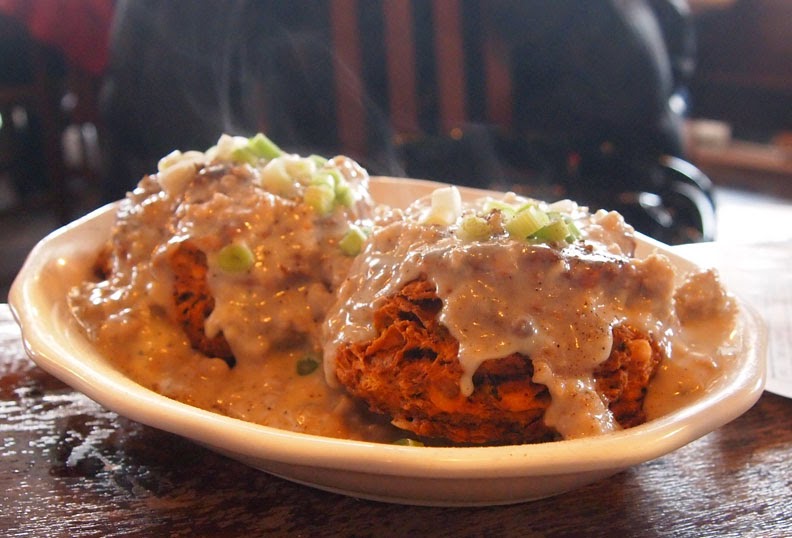 Biscuits and sausage gravy can be served any time of day or night. Nickel Taphouse's biscuits are heartier, browner, and crisper than any other I've tried and make a nice textural foil for all that creamy gravy. 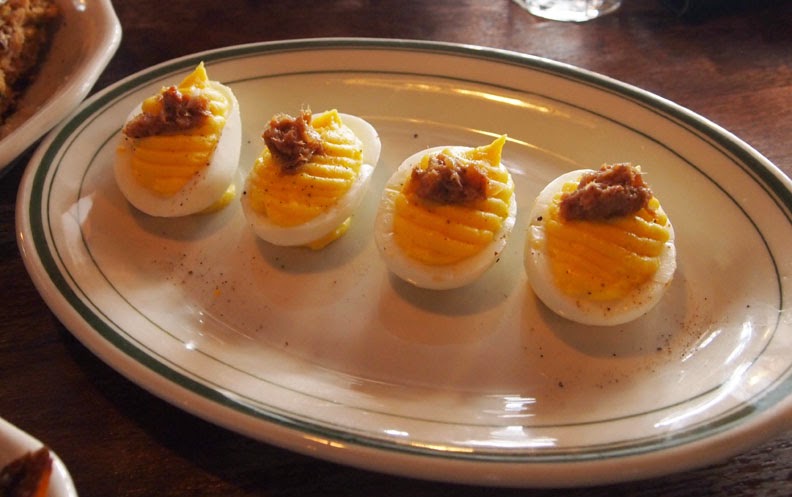 We also tried their deviled eggs topped with tomato jam. They were rich and tasty and served close to room temperature, which is my preference. (I dislike refrigerator-cold deviled eggs.) 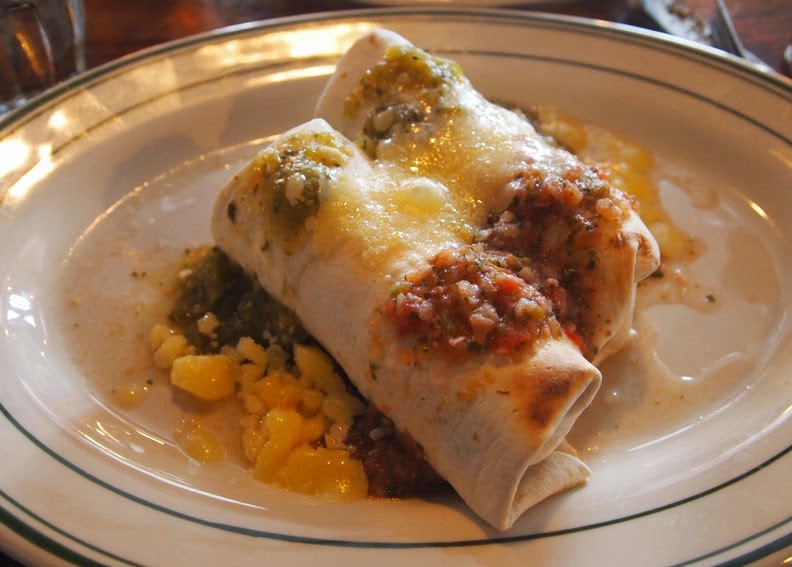 Two of us at the table ordered the hash of braised brisket and potatoes topped with over easy eggs and smoked cheddar. It was filling and a perfect prelude to a lazy weekend afternoon. I had the "huevos enchiladas." I'm going to be nit-picky here. If you're going to call something an enchilada, it should be wrapped in a corn tortilla and covered in a chile-based sauce. That's what I expected. The menu did say flour tortillas, but I figured they'd still be made like a typical enchilada. What I received would probably more accurately be called burritos. There was a bit too much tortilla for my taste, but overall the dish was tasty and well-seasoned.

The fourth at our table had the eggs Benedict, and she praised the Hollandaise sauce. Additionally, her eggs appeared to be perfectly cooked, oozing nicely over the pork roll and grilled tomato when she cut into them. 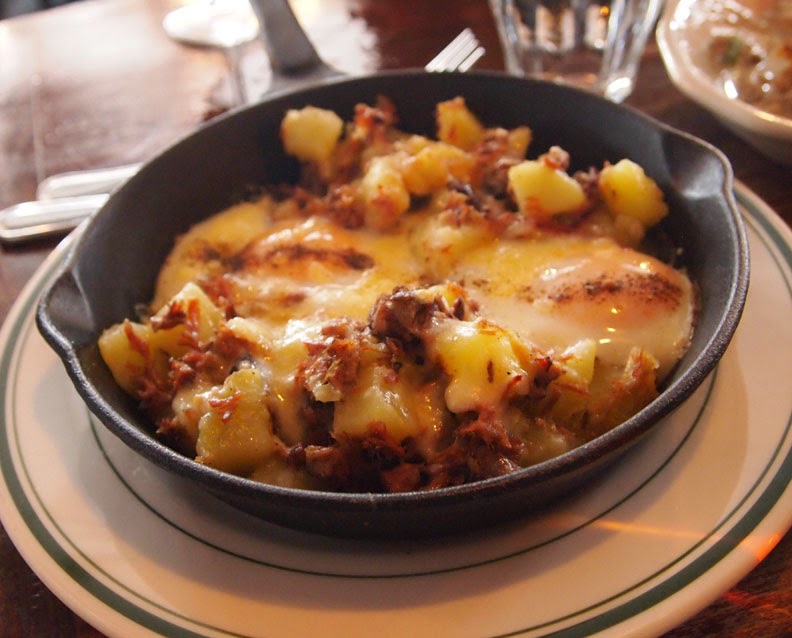 We also had one non-breakfast dish, the very delish Buffalo brussels sprouts. Slicked in hot sauce and topped with a bleu cheese cream, they proved that the lowly brussels sprout can be served at any time of day for just about any course, except dessert.

If you're not into breakfast dishes, a handful of sandwiches like the restaurant's signature beef on weck is available at brunch, as are a lobster roll, Roseda beef, veggie, or turkey burgers, and a BLT. Salads, oysters, bagels & lox, too. 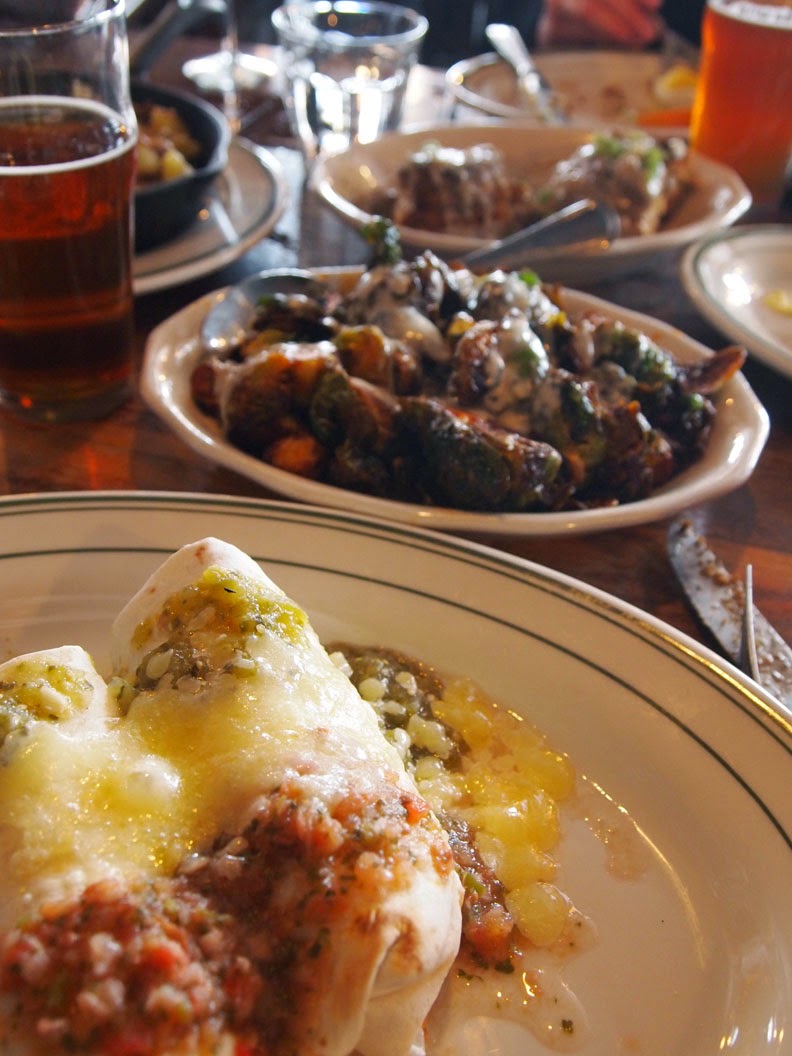 We enjoyed our food with rounds of Evolution (and other) beers, including Lot 3 and Sprung. The former is a nice hoppy IPA and the latter is a smooth and clean American blonde ale brewed with hibiscus. Both worked nicely with our breakfast dishes (as did all the other stuff we imbibed - hic).