Your Chocolate in My Peanut Butter (and vice versa) 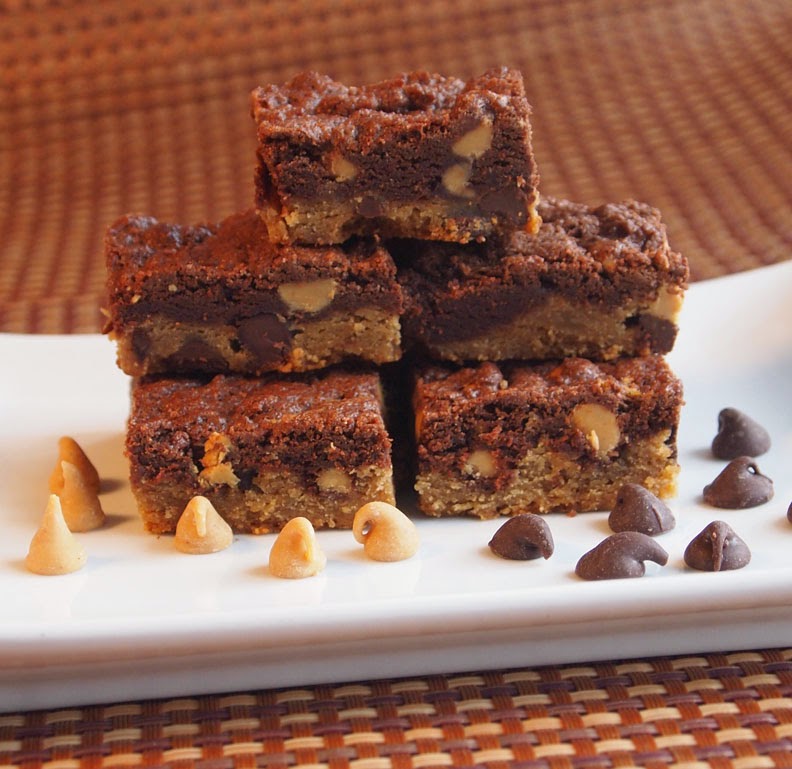 When I was a kid, I was a big fan of Doctor Dolittle, a 1967 movie about a man who could talk to animals, starring the hunky Rex Harrison. I even had a stuffed pushmi-pullyu--allegedly a cross between two animals with unique horns (a gazelle and a unicorn, and yes I know the latter is fictional) despite not having any horns at all. It looked just like a two-headed, buttless llama. How the poor creature pooped, I do not know, but I loved my little stuffed beast anyway. I still have it, actually, 40-umpteen years later.

Why do I bring up this inconsequential trivia? Because that's how I roll. And I thought it was an apt introduction to my latest baking invention--the two headed-brownie. Or is it a two-headed blondie? It's both, really. Half of the bar cookie is a blondie, flavored with creamy peanut butter and studded with chocolate chips. The other half is a brownie with peanut butter chips. Together, the combination makes for one decadent, peanut-butter-y treat with more than a hint of chocolate.

I used a large baking pan and made standard 3/4"-high cookies, but you can certainly pack the dough into an 8"- or 9"-square pan and bake it for an extra 15 minutes or so, if you want something impressive that shows the layers more obviously. Just make sure to cut them into fairly small pieces, as these babies are rich.

To make blondies: Whisk together the melted butter and sugar in a bowl. Stir in the egg, vanilla, and peanut butter and beat until well incorporated. Stir in the salt and flour until no streaks of flour remain. Stir in the chocolate chips.

To make brownies: Whisk together the melted butter and sugar in a bowl. Stir in the egg and vanilla and beat until well incorporated. Combine the cocoa, salt, and flour. Stir/into the butter sugar mixture until no streaks of flour remain. Stir in the peanut butter chips.

Scrape the blondie batter into the prepared baking pan and smooth the top. Dollop the brownie batter on top as evenly as possible and spread slightly with a spatula to fill the gaps. Try not to mix or marble the two batters.

Bake for 25-30 minutes, until a toothpick inserted in the center comes out with a few moist crumbs.

Allow to cool before cutting into squares.