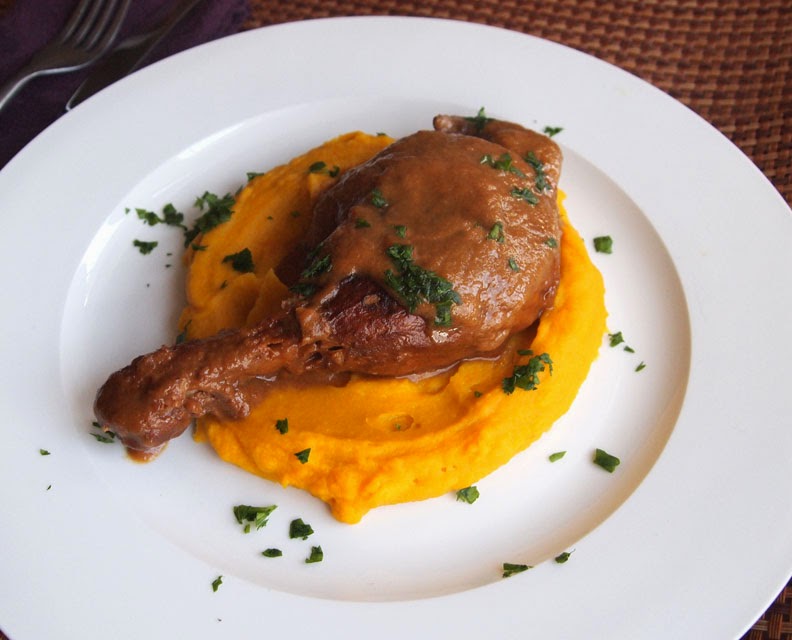 We Minxes love duck. If we see it on a restaurant menu, one or both of us will order it, but we don't make it at home very often. It's not a particularly difficult protein to work with, but unless we're talking whole ducks, it can be quite expensive. (Whole ducks aren't exactly cheap, but they're not outrageous.) Raw duck breasts are a fairly elusive creature; Wegman's usually has the D'Artagnan brand in stock at a cost of around $30 per pound. Legs would probably be cheaper--if they sold legs in any form other than pre-confitted.

We end up buying our duck legs at Great Wall, a Chinese supermarket in Catonsville. I have heard that they sell breasts, but I have never seen them there. Tongues, sure. Feet, ok. But not breasts. I've also heard that H Mart sells duck, but again, I haven't found it there. So Great Wall it is. A pack of two legs sets us back a bit over $6, which I suppose isn't insane, but considering they have about as much meat as a chicken thigh, it's not cheap, either. In any case, we love duck and will buy it when the mood strikes/when we happen to be at Great Wall.

In the past, I've made cassoulet-type dishes with duck legs. I wanted to do something else this time, so consulted the Oracle (aka Google). The recipe that leapt out at me was one for braised legs with figs, star anise, and winter squash. The combination sounded good, but our grocery store didn't have any dried figs. We had a bag of dates in the pantry, so I decided to use them. Since I was already making substitutions, I looked for a way to make the dish mine. I didn't like the idea of having big chunks of vegetables in the finished dish, or serving it with rice. It would remind me too much of my mother's pot roast. While I loved the meat itself, I wasn't fond of the giant chunks of stewed celery and carrot, both of which my mother made me eat. Instead, I'd turn the winter squash into a puree and dice the other vegetables finely, so they'd merely flavor the sauce rather than serve as a vegetable. I was unsure of the flavorings though. I liked the idea of star anise, but would it be better in the squash than in the duck? Would it be redundant if I used it in both? So I consulted with my other Oracle, Mr Minx, who has the occasional flash of culinary brilliance. He suggested adding a smoky and spicy element, so I added chipotle to the duck along with the star anise. I seasoned the squash with salt and pepper only, so its mild sweetness could stand on its own.

The result was pretty terrific, if I do say so myself. The chipotle, while adding a good deal of heat, played nicely with the star anise, and the creamy squash helped soften the impact of the chile. The dates broke down in the sauce completely, adding a subtle sweet creaminess. We served the dish with pieces of crisp sourdough toast, which added a bit of textural contrast and was useful in mopping up the luscious sauce.

The dish seems a bit fussy, and maybe it is, but it's worth the effort. As a plus, the duck perfumes the whole house.

Heat the oil in a large (8-quart) pot over medium-high heat. Add the duck legs, skin-side down, and cook until the skin is very well browned and crisp, turning once or twice to make sure they are browned all over. Use tongs to transfer duck legs to a large plate. Drain off most of the fat from the pan and add the carrot, celery, and onion. Cook, stirring often, until vegetables soften, 5 minutes or so. Stir in the garlic, the chopped dates, the star anise, and the chipotle. Cook for an additional minute or two. Put the duck back into the pan and pour in enough broth to just about cover the duck. Increase the heat to high and bring the liquid to a boil, then reduce heat to low, cover pot, and simmer the duck until tender, 1 1/2 - 2 hours.

While the duck is cooking, preheat the oven to 350°F. Cut the squash in half, scoop out and discard the seeds. Place the squash, cut side down, on a foil-lined baking sheet. Bake for 60-90 minutes, until the squash is very tender. Set aside and allow to cool until it can be handled without burning oneself.

Scoop flesh from squash into a blender container. Add heavy cream, a few tablespoons at a time, and puree squash until it's the consistency of baby food and very smooth. If you're using a squash with a fluffier, drier consistency, like buttercup, you might have to add water to help the blender along--I used about 2/3 cup of water and 1/4 cup of cream to my buttercup. Season puree with salt and pepper to taste. Pour into a small saucepan and set aside.

When the duck is done, remove it from the pot. Turn the heat up to high, uncover the pot, and reduce the remaining liquid to about a cup. If there's a lot of fat floating on top, skim it off, but I find that the combination of the dates and the boiling emulsifies everything nicely. Once liquid is reduced, use a stick blender to puree the vegetables and dates into a smooth sauce. Add the champagne vinegar and season the liquid with salt and pepper to taste. Add the duck back to the pot and turn the heat to low.

Reheat the squash puree. Place a puddle of it in the center of each serving plate. Top with a duck leg and a few spoonsful of sauce. Garnish with chopped parsley. 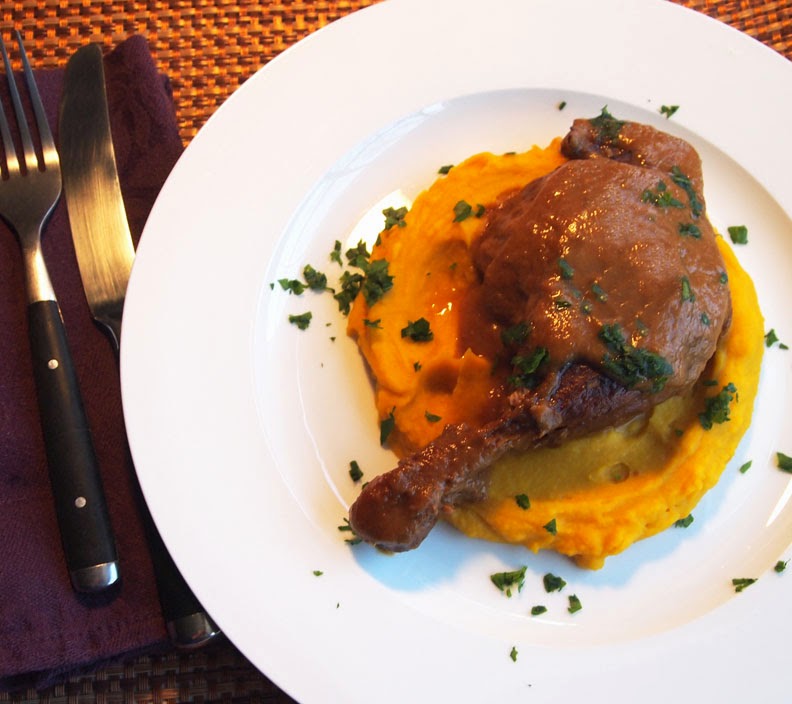