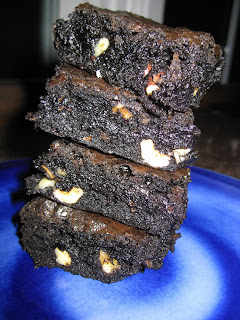 Chocolate maven Alice Medrich is one of my Facebook friends and the other day she posted a link to her brownie recipe in the February 2011 issue of Bon Appetit. I realized I had not yet even removed the magazine from its plastic sleeve and, after doing, so, turned directly to the recipe. It seemed pretty simple, and I was craving chocolate, so I thought I would make them right there and then.

Medrich recommends using non-Dutch-processed cocoa, but all I had on hand was Hershey's Special Dark cocoa--a blend of natural and Dutched cocoa--which turned my brownies nearly jet-black. Kinda goth, don't you think? I also substituted chopped hazelnuts for the walnuts, because that's all I had.

The verdict? They were fine, but had perhaps a bit too much texture, the polar opposite of Rocco's refried-beans-smooth diet disaster. While the Bon Appetit brownies were moist and chewy, they were a bit sandy-textured. I followed the recipe exactly, and I am of the opinion that the melted butter shouldn't have been taken off the heat before the sugar was added, which might have allowed the sugar to dissolve a bit more. But what do I know except for my own palate?

Tasty, good, etc., but I still haven't found a recipe to come close to my favorite recipe that uses Ghirardelli Sweet Chocolate and Cocoa. What's your favorite brownie?
Posted by theminx

That reminds me... I still have those brownie pics I took of mine somewhere. Still want'm?