Grace Garden Dinner to Celebrate the Year of the Rabbit

Is it terrible that since we've found Grace Garden, we eat very little Chinese food? Once a quarter or so, we venture out for dim sum, but Grace's lip-smacking offerings have really spoiled us for dinner-time dining.  Odenton is a 45-minute haul for us, so sadly, eating Chinese food has become a special occasion. And what more special an occasion to celebrate at Grace than Chinese New Year? Mr Minx and I really enjoyed last year's feast, so I made sure to sign us up as soon as the first chatter started on the Charm City Chowhounds list.

A few of the ten courses served for the Year of the Rabbit were identical to those we ate to celebrate the Year of the Tiger - the soup, the amazingly plump and delicious lamb chops, the 8-treasure sticky rice-stuffed duck - but the rest offered new taste experiences. 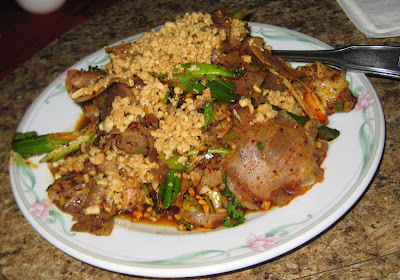 This is the much-vaunted Sichuan Triple Treasures that I had read about on so many other food blogs - beef tongue, tripe and tendon mixed with spicy Sichuan sauce, scallions & peanuts, served chilled. Despite the amount of praise, I had never tried this particular dish because every time we've eaten at Grace Garden, my peanut-allergic brother has been with us. (I don't even risk eating at Five Guys if I'm going to see him later in the day.) Also, I figured I was probably the only one at our table adventurous enough to eat tendon and tripe. Turns out, it earned every compliment. The three types of beef offal in this dish of fuqi feipian, also  known as "man & wife lung slices," are sliced wafer-thin, cooked until very tender, and are seasoned with a lively sauce of chiles and Sichuan peppercorns. Even compared to nine other outstanding dishes, Mr Minx declared this one to be his favorite of the evening. 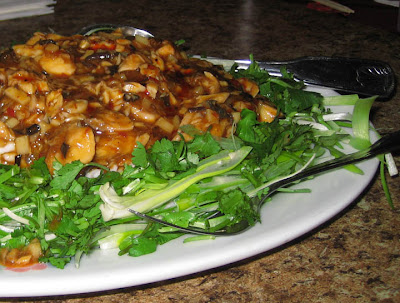 Another dish that was created for the occasion was a variation of GG's famous fish noodles, this version being topped with a spicy sauce containing bits of more fish. It was quite good, although I think I prefer the austerity of the original version. 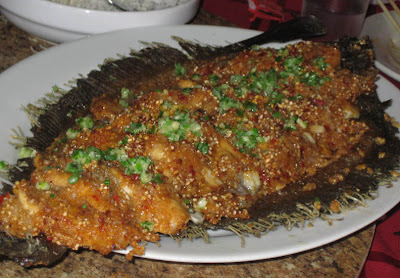 The whole fish this time was mostly unsauced, the meat arranged on its own deep-fried carcass of delightfully crispy edible bones, which are almost  tastier to eat than the fish itself.

We also had two vegetable courses this time around, one a stir-fry of Chinese chives that taste a bit like a cross between asparagus and scallions, but better (and stinkier), and one of a green vegetable with caramelized garlic cloves. There was some discussion over the type of vegetable in the dish; one diner was pretty sure they were snow pea shoots, but I believe they were more closely related to choi sum or another member of the brassica family.

Finally, our dessert was better, but no less-odd than last year's: the chef's version of a Jell-O salad, made with lime gelatin, pineapple, and cream. Better than bean jelly, IMHO. 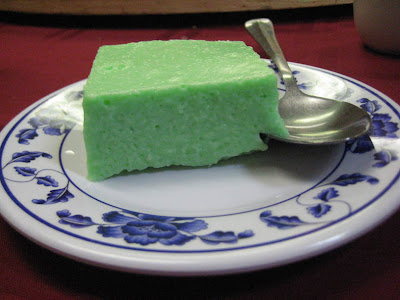 We were just told of the virtues of Grace Garden! I cannot wait to check it out. I hear it's worth the trip!
~Kristin

I think the food looks great and maybe I would have ventured too on eating the tripe and tendon dish, because it looked amazing. I’m not a big fish fan, but this one looked nice even though it was quite un-sauced. And I also like the dessert, maybe just because I like pineapple a lot.

Throw some pecans and that dessert and it sounds like one my southern mom used to make for dessert at Thanksgiving! Very strange, how worlds collide?!?