I usually have several posts in draft format, some of which I promptly forget. When I hit the link to view my draft posts, there it was...a post on Christmas dessert. Yes, I realize that we're already a month-plus into 2011 and I still haven't posted something from 12/10. :::shrug:::

Pumpkin isn't just for the holidays; I enjoy cooking with it all through the colder half of the year. Same goes for eating cheesecake, except that's a 12-month thing. 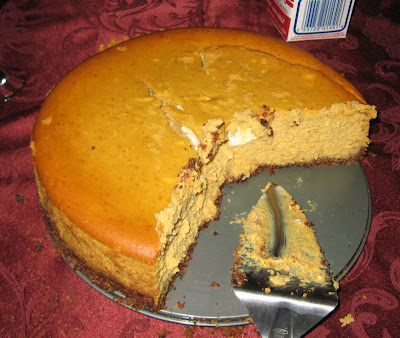 Christmas Eve 2010 was largely spent making Christmas dinner: a massive lasagna with home-made sauce and real lasagna noodles (the kind you have to boil - honestly, it makes a real difference). Although the sauce required time to cook, it was an easy dish to assemble and bake on one day and transport and reheat the next. I wanted a similar low-maintenance dessert and thought a pumpkin cheesecake would be both festive and easy. And delicious, of course.

I used a Betty Crocker recipe that called for four 8oz boxes of cream cheese and five eggs. In the past, I've found that recipes that have a 1:1 ratio of boxes of Philly to eggs produces a cake that is to my liking: more fluffy than dense, nicely moist. So why did I travel outside of my comfort zone? Lord knows. I guess I thought that one more egg wouldn't make a difference, but it did. While this cake tasted fine, it was far too dense. I could barely finish one slice, and then I really didn't want to eat any more of it. And because it was so dense, no one else could finish more than a slim slice, so even after giving guests cake to take home, we still had too much on our hands.

Sadly, about a fifth of it ended up in the garbage after we got tired of looking at it.

I hate when I make something that doesn't turn out to my liking because it occasionally puts me off the dish entirely. Suddenly pumpkin cheesecake isn't my friend. Does anyone have a recipe to share that will change my mind?
Posted by theminx

I do the America's Test Kitchen Pumpkin Bourbon cheesecake every year for Thanksgiving; my family friends seem to love it (they request it). Me, I'm just as happy with a tart tatin...though I think the ATK pumpkin bourbon cheesecake is REALLY good. I just prefer chunks of fruit. :)

Thanks, Kristin - I'll check it out. And yes, tart tatin would make me happy, too.

Feel free to drop me an email if you can't track down the recipe. I have it saved in my GMail. kpilotte at the good ol' gee-mail dot com. I think the biggest "hidden trick" of the recipe is to dry the pumpkin before using it.