One of my favorite products discovered at the 2021 Fancy Food Show was Oomame's line of globally-influenced chile crisps. Originally from China, chile crisp has become a popular condiment among chile-heads and others who enjoy a flavorful bit of spice plus crunchy texture. It's great on dumplings, but also pizza, pasta, and just about everything else. What I like about Oomame's product is that it comes in four varieties - a classic Sichuan style, plus others borrowing flavor profiles from Mexico, Morocco, and India. While I still like to use the Sichuan version on typically savory dishes, I have found that the dried fruits in the other varieties (fig in Moroccan, papaya in Indian, mango in Mexican) add a subtle sweetness that makes them also work well with foods that are traditionally sweeter. Try a drizzle of Moroccan Oomame with a sprinkle of feta cheese on your next bowl of oatmeal--rather than the usual brown sugar or maple syrup and fruit--for something totally unexpected and totally delicious. But let's push that proverbial envelope a bit, shall we? 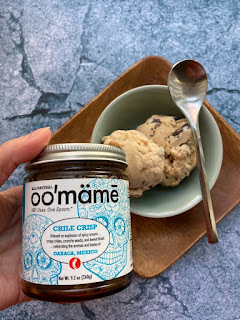 Some ice cream shops in Sichuan province have taken to drizzling chile oil on vanilla soft serve. And while a chile crisp sundae seems like a fine idea, I took it even further by putting chile crisp in ice cream. Yes, I did! The Mexican-inspired version of Oomame Global Chile Crisp, in particular, seemed ripe for taking a savory condiment fully into dessert territory. But rather than using vanilla in my frozen confection, I borrowed some elements from the chile crisp itself to flavor the creamy base. I started with Jeni's ice cream recipe, which uses corn starch and cream cheese in place of eggs as a thickener, and infused it with mango and orange peel, adding peanuts as a substitute for the pepitas in the Mexican Oomame. (While they're great for crunch, I didn't think they'd add all that much flavor.)
The result exceeded my wildest expectations. Mr Minx wasn't all that thrilled with the flavor of dried onion in his ice cream but it didn't bother me. Nor did the occasional hit of cumin. The predominant flavor was orange peel, even more so than chile, which I thought was enough to keep my creation well within the realm of dessert. If you're an adventurous eater, give it a try.
I have no regrets. 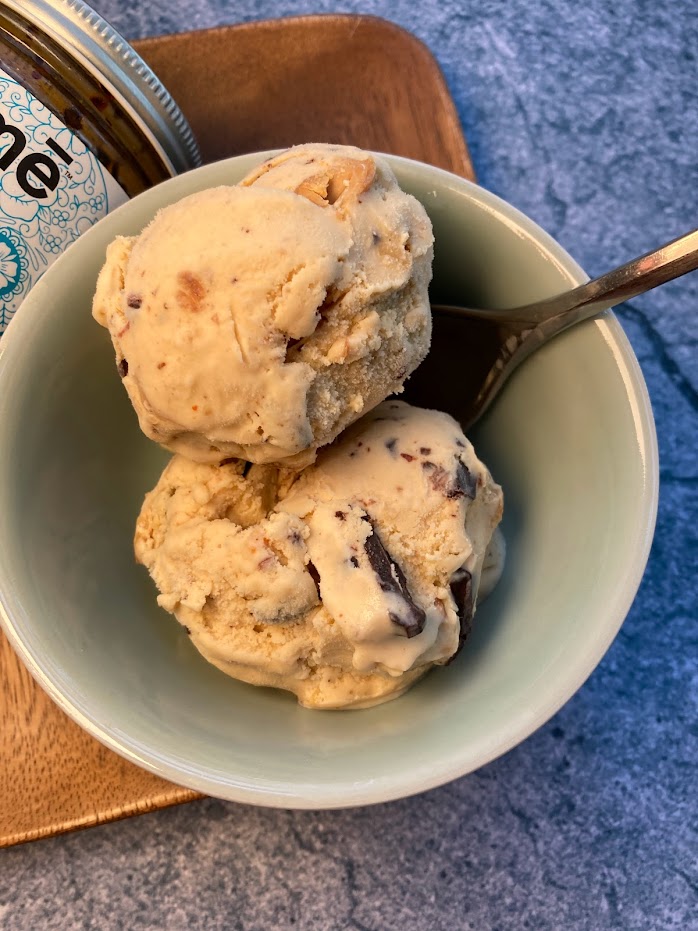 Oomame Chile Crisp Ice Cream
1 clementine or half a small orange
2 cups milk
1 1⁄4 cups heavy cream
1 ounce dried mango strips
Small handful of roasted unsalted peanuts
4 t cornstarch
2⁄3 cup sugar
2 T light corn syrup
1⁄4 t kosher salt
3 T cream cheese, softened
2 T Oomame Mexican Chile Crisp
Additional roasted unsalted peanuts
Chocolate chips (optional - I used a Seattle Chocolates Mexican Chocolate bar, cut into slivers)
Peel the clementine or orange in large strips, saving the fruit segments for another use. Carefully scrape the white pith from the inside of the peel with a small knife.
Reserve 1/4 cup of milk and put the remaining 1 3/4 cups plus the cream into a 4-quart saucepan. Add the mango, peanuts, and clementine or orange peel. Over medium-high heat, bring the milk to almost a boil. Turn off the heat, cover the pan, and allow the flavorings to steep for about 20 minutes.
Stir the cornstarch into the reserved 1/4 cup of milk and set aside.
Strain the steeped milk into another 4-quart saucepan, reserving the fruit and nuts. Add the sugar, corn syrup, and salt to the pan and bring the milk to a boil over medium-high heat. Cook for 4 minutes, then stir in the slurry. Bring back to a boil and cook until thickened, 2 minutes.
Put the cream cheese in a large bowl and pour in 1/4 of the hot milk, whisking until smooth. Carefully whisk in the rest of the hot milk. Stir in the chile crisp. Pour the milk into a storage container. Add a layer of ice cubes to the bottom of a baking pan large enough to fit the storage container and put the container on top of the ice in order to cool the milk mixture down quickly. After about 15 minutes, put the container in the fridge to chill completely, 4 hours or overnight.
Cut the steeped mango and orange peel into small pieces and reserve along with the peanuts.
Put the chilled ice cream base into the bowl of an ice cream maker and process according to manufacturer's directions. After the ice cream has started to thicken and is almost done, add the mango, orange, peanuts, and chocolate, if using. Scoop ice cream into a freezer-safe storage container (I just used the same one I used for the hot milk) and smooth with the back of a spoon. Cover and freeze until firm, at least 4 hours.
Serve with additional chile crisp, or over your favorite brownies. Or eat straight out of the container. 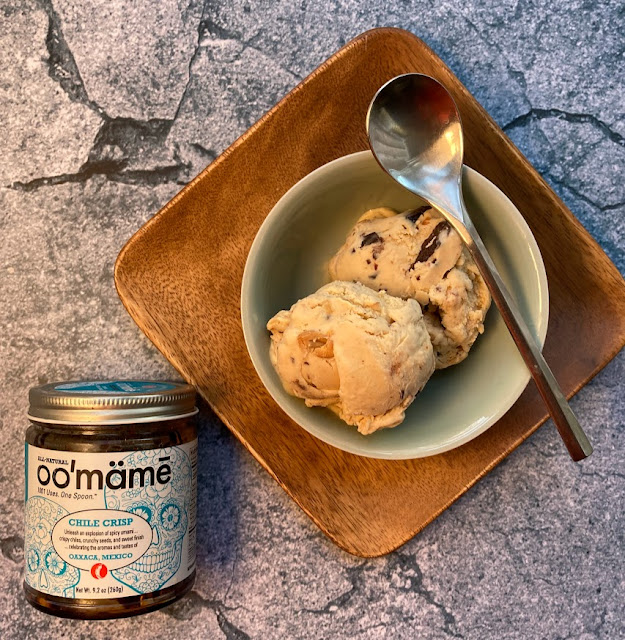