If you're reading this, you're at the end of The Great Pandemic, Home Edition, Week 5. If you're not reading this, you're either dead, or merely completely unaware of the amazing humor that awaits you in my recaps. My five friends will tell you that you are missing out on the experience of a lifetime Well, four of them will. The fifth one doesn't read my recaps, either. She is dead. But were she still alive, she'd damn well be reading this and laughing her ass off.

Had I told you all that my best friend died last year? In February. She had several strokes and a heart attack, not necessarily in that order, and she just wasn't strong enough to pull through. She was 67. The same age my mother was when she died 18 years earlier. In the same month of the year. My father died last year, too. 2019 was a shitty year, and 2020 isn't looking much better at the moment. Most of my close friends live in other states--New York, New Jersey, Washington. I made a new friend last year, and his (local!) presence in my life helped me more than he'll ever understand. I don't know why we're friends--there is an enormous age difference--but we are. He seems perfectly happy to cook/drink/eat/smoke weed/hang out/all of the above with me. (Clearly, there's something wrong with him.) I haven't gone more than two weeks without seeing his pretty face, and it's been three at this point. Thank goodness for Mr Minx, my everlovin' husband and bestest friend, who has been by my side (pretty literally at this point, as our respective workstations are now on the dining room table) for almost 20 years now. I'd go starkers without him. I can't imagine what it's like for folks who are living alone during this time, especially extroverts. Thankfully I am not one of those. In general, I don't like people and I never thought I'd miss them. I don't miss all of them, particularly the idiot joggers in my neighborhood that I can't seem to escape while I'm taking my daily walk. I just miss my loved ones.

Which brings us to this week's Quickfire Challenge. Yes! There is a connection!

When the cheftestants enter the Top Chef Kitchen, they notice that Padma is missing. They also notice that every workstation has a new cell phone sporting a giant cellphone carrier logo and a set of earbuds. Eric's phone rings first--it's his wife, Janell. Nini's mom calls next, then Kevin's wife. Soon everyone is jabbering happily with one of their Loved Ones... 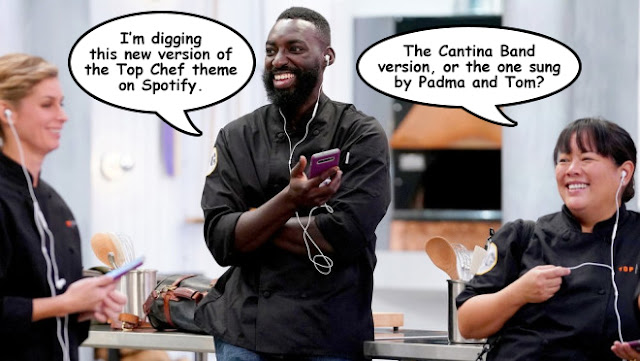 ...except Bryan, who wonders if his phone will ever ring. I WILL CALL YOU, BRYAN! Eventually his sister, Staci Rosenberger, who is the pastry chef at his restaurant Family Meal, gives her bro a call. Padma finally shows up and tells the cheftestants to hang up on their loved ones because what she has to say is more important than any of the cooing and chattering that is going on. The important announcement? Cellphone Carrier Co. is a sponsor of the show, and like the Ugly Dolls with Crazy Hair last week, the sponsors have to be worked into a challenge in some obvious way. This time, the cheftestants are going to use their nifty new phones to communicate with their loved ones, who just happen to be dining at Nancy Silverton's restaurant Osteria Mozza there in LA.

What? The cheftestants couldn't believe that their mothers/husbands/sisters/besties were eating yummy food while they were toiling over hot stoves in an attempt to win a competition that each of them had lost at least one time before. Padma goes on to explain that the Loved Ones were eating one of three classic Mozza dishes, which they would describe over their own new Big Cellphone, Inc., phones to the cheftestants, who would in turn attempt to recreate the dish at every level, from ingredients to technique to appearance. The team that would do the best job of this difficult task would earn the cheftestant not only immunity but also $10K, courtesy of Cellphones R Us.

One really needs some food knowledge to be able to accurately describe (or comprehend the description of) a yellowtail collar, but only Bobby Flay's daughter might know the difference between her father's favorite Calabrian chile, and any other kind of hot, red, not dried (not fresh either--they are predominately jarred), chile. Though Bryan's sister is a professional (pastry) chef, she isn't a fish person and her description of the yellowtail caused Bryan to assume it was branzino. Jenn's sister actually thought it was chicken "with wings" but once she described them as being "horseshoe" shaped, Jenn figured it out. (Jenn once worked at seafood-happy Eric Ripert's Philadelphia restaurant, 10 Arts, so she knows her fish.)

The other two dishes seemed much more straightfoward, especially the steak. Lee Ann's mom described it as not having any fat, which translated to Lee Ann as the hanger cut. Mama Wong also correctly identified the arugula salad and Parmesan cheese. The only thing she didn't get was the vinegar, which she tasted as soy. Kevin's wife is an attorney, and proved to be a pretty sharp communicator. Melissa was smart enough to ask her childhood friend exactly how many of everything is on the plate, which certainly helped with appearance. 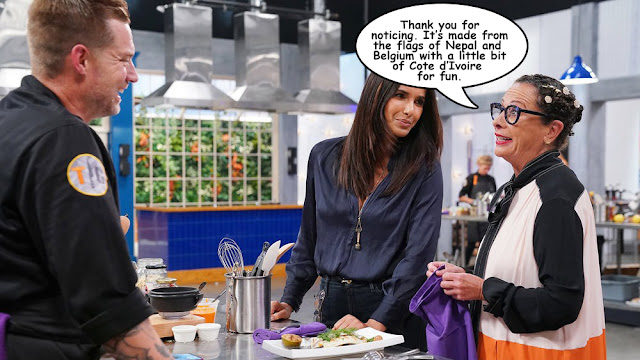 The guest judge this week was Nancy Silverton, who appeared to be wearing a frock made from old flags and a kindergarten's-worth of barrettes in her hair. Though she thought Bryan's dish was delish, he came in last for his use of incorrect fish. (Rhymes completely unintentional.) Melanie and Lee Anne did things right, but Kevin's was rightest of all, scoring immunity and the ten grand.

For the Elimination Challenge, each chef had to create a signature food product. Nancy Silverton made her mark with La Brea Bakery (the products of which I was once able to buy at my Baltimore-area Giant Foods; since I don't eat bread anymore, I don't know if this is still true). Not only were they to create a product, they would also need to use it in a dish to serve to patrons at an LA-area shopping mall. Patrons would receive tickets, which they would award to their favorite product. They would also be able to buy the product--though nothing seemed to be packaged in a particularly sanitary manner. The chef who sold the most product would be safe from elimination (even if the judges hated it).

It seems to me that Top Chef producers have been watching episodes of old Food Network reality shows. That Quickfire Challenge is done every season on Worst Cooks in America, on which it's called "Remote Control Chef." Contestants describe the components of a composed dish to Anne Burrell and her male counterpart (whichever poor FN sap is willing to compete--and lose--against her in any given season), who remotely attempt to recreate the dish. I've seen the Elimination Challenge a couple of times on Next Food Network Star. It's also Shark Tank-ish. However, I do understand that there are no new ideas. Anyhoo....

...the cheftestants, who are to be assisted by their Loved Ones, get $600 to spend at Whole Foods while thinking on their feet. I could never conceive a product in the time it takes to get from the Top Chef Kitchen to the grocery store! But Kevin immediately thought up a hot salt, which he planned to incorporate into chicken and waffles. Nini decided on the classic sauce of her people, nuoc mam, with roasted elements Jenn uses ginger and lemon in everything she makes and decided this combo would make a fine condiment. Eric and his wife made a yellow pepper "Calypso" sauce that he served on a fried dough known as doubles. Karen created a romesco with some non-traditional elements. Stephanie and her husband made a vegetarian chili base. Malarkey did a relish called "Smiles" named after his two kids, Sailor and Schmailor (gag). Geoffrey made a Haitian pickle. Lee Ann recreated her mama's mapo sauce for home use. Melissa decided on a kimchi based vinaigrette. And finally, Bryan bottled his almost-famous calamari bolognese. I saw him make this dish with his brother on a Voltaggio Bros TV special. They were both--as per usual--incredibly stiff and uncomfortable on camera (despite having already had one in their faces during Top Chef season 6). I'm pretty sure I heard Bryan pronounce gochujang as "goo goo jang" on that show, but I haven't held it against him. Actually, I have, but I've mostly forgiven him. In any case, the sauce sounded weird to me then, but after tasting a version made by a local Baltimore chef, we realized it was only weirdly delicious.

While the chefs are toiling, Lee Ann's mama suddenly seems faint. She is whisked off to rest while Lee Anne attempts to make hundreds of dumpling wrappers on her own. Luckily, she is beloved and both other cheftestants and their Loved Ones rush to her aid.

The next morning, we learn that Malarkey--not so beloved--has ranked the remaining chefs in order of likeliness of winning. His name is on the top, of course, followed by Kevin, Bryan, Melissa, Karen, and the rest. I agree with Kevin, Bryan, and Melissa at the top of the list, but am pretty sure Malarkey has no chance of winning this competition. But we'll see, huh? 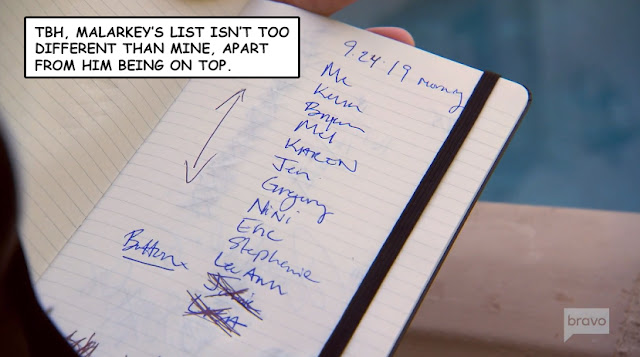 At the LA Corporate MegaMall, the cheftestants and their Loved Ones set up their stations and await customers. Mama Wong reports for duty refreshed and ready for action. The judges arrive, with Nancy Silverton looking like someone's daft old granny, wearing a muu-muu and lots more of those crazy barrettes in her hair. She makes the rounds with Padma, Gail, and Tom, pretending to enjoy the dishes as they're tasting them, but then sneaking off to the side to make disparaging comments. Like, Stephanie's chili base lacked depth and complexity, and Malarkey's relish was muted and "tasted confusing." Also, who would name their kid, "Schmailor?" Karen's romesco was neither bold nor chunky enough for Nancy. Jenn's Sunny Lemon Ginger Love had terrible texture, needed more lemon, and wasn't "sunny." They liked Bryan's bolognese, but thought it would be a hard sell. Padma would buy Nini's sticky nuoc cham in a heartbeat though. Etc. 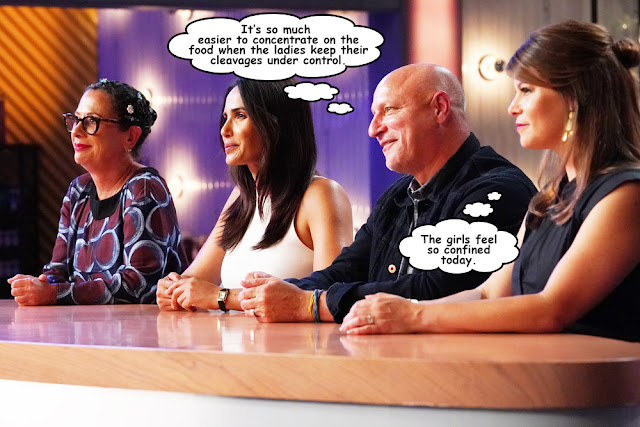 Back in the Top Chef Kitchen, we find that Melissa has sold 31 bottles of her kimchi vinaigrette, which is enough to keep her safe from elimination. The judges liked it, though they thought it could be spicier. The favorites were Gregory's pickle, which cut through the richness of his chicken dish, Eric's chili sauce, which was likened to sunshine and both craveable and accessible, and Nini's nuoc cham. Gregory gets the win.

On the bottom are Malarkey, Jenn, and Stephanie. Gail didn't think that Stephanie's sauce differentiated itself enough from other tomato-based cooking sauces already on the market. Malarkey's sauce, "ate oily," and was not fresh and bright, due to having both cooked and raw elements. Also Schmailor. But the stringy texture of the ginger in Jenn's sauce seemed like a mistake, and diluting it with yogurt killed the flavor. And so she was chopped. I mean, asked to please pack her knives and head over to Last Chance Kitchen to battle last week's loser, Lisa.

Next week: Our heroes pair up to battle evil in teams of two. Sadly, we don't get to see Bryan in tights. And there is a scary double elimination.