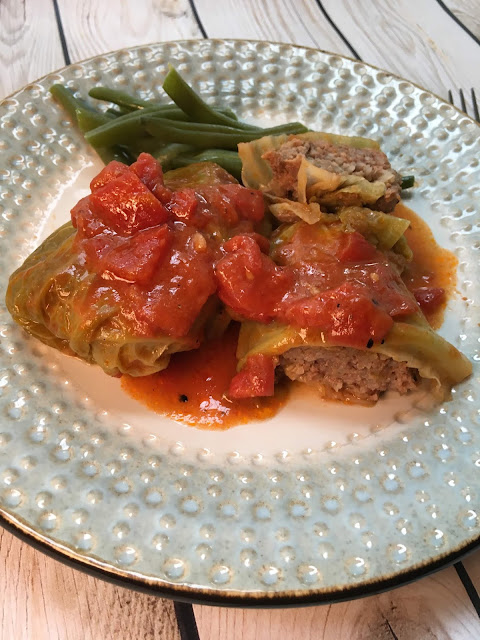 From time to time we get a delivery of farm fresh produce from Washington's Green Grocer. A recent box included a fat savoy cabbage. I took one look at that thing and thought "golabki." (I suppose if I were more Ukrainian, I might have thought "halupki.") I had never made golabki (the word is pronounced "go-woomp-key" and means "pigeons") before, but that wasn't going to stop me. Once upon a time I had never made, well, anything that I make now. There's always a first time.

Genetically, I am very much Eastern European. Yet I seldom, if ever, cook food from that part of the world. I think if my grandmother had been younger when I was born, and up to cooking more labor-intensive dishes like pierogi and golabki and kruschiki (oh my!), I may have learned some recipes. Or would even have had the inclination to try making these things for myself. But she mostly made soups and stews, easy things that involved throwing a bunch of ingredients in a pot and adding a handful of peppercorns. (I'm not kidding. Every mouthful of Grandma's chicken/beet/beef/sorrel soup revealed hidden spicy pepper bombs that blew out the palate for a couple of minutes.) My mother was more of a convenience foods cook, and she never made anything more complicated than Shake 'N Bake when I was growing up.

But Golabki are cabbage rolls stuffed with a combination of ground beef and rice and sauced with Campbell's Tomato soup. How hard could they be?

I looked at a couple of source recipes, including ones my cousin Dianne had sent me last year. One was her grandmother's recipe. It looked good, but those old recipes are always a bit underseasoned--aka plain--for my palate. I decided to do a riff on the classic, but with additional onions, garlic, and fresh thyme from my garden, to perk it up a bit. And tomato soup was fine, but I thought it could be better with the addition of diced tomatoes and tomato paste.

I am too fancy for my own good sometimes.

I gotta say though, my changes worked out for the best. I hadn't had stuffed cabbage in ages, so didn't have a nostalgic taste in my mind's palate, waiting to taunt me if my version didn't taste as good as my memory. My cabbage rolls were pretty damn good, if I do say so. I served them with some green beans and the leftover rice. You can serve them with whatever you want.

Fill a large pot with water and bring to a boil. Cut out the core of the cabbage and gently lower the head into the boiling water. Blanch about 10 minutes. If you notice the outer leaves softening and starting to float away from the rest of the cabbage, remove them as it happens. You don't want to cook the leaves, per se, just soften them enough to fold around a filling.

Remove the cabbage from the pot and blot it dry. Remove as many whole leaves as possible. The center of the cabbage will still be crunchy, so stop when you get to that point. I got about 19 leaves out of my medium-large cabbage. Set the nicest and larges leaves aside; reserve the rest. Discard the uncooked cabbage center or use it for slaw.

While the cabbage is cooking, melt the butter in a large skillet over medium-high heat and add the onion and garlic. Cook, stirring regularly, until softened. Add the thyme and season with salt and pepper. Let the onions get slightly browned before turning off the heat and allowing them to cool completely.

In a large bowl, place the ground beef, rice, egg, cooled onion mixture, and additional salt and pepper to taste. Blend well to combine. Refrigerate for at least an hour to allow flavors to meld.

Time to fill the leaves. If any of them have a tough bit of vein at the end where they were attached to the head, cut it out. Add a few generous tablespoons of filling to the stem end of the leaf. Fold over the top, then the sides, and roll up. You will probably only get one or maybe 1 1/2 turns.

Use the torn and leftover leaves to line the bottom of a large pot. Arrange the filled cabbage parcels in concentric circles in as many layers as needed. Pour over the condensed soup. Fill the soup can with chicken stock to rinse it and add that to the pot. Dump on the can of tomatoes. Mix the tomato paste with a cup of stock and add that, too. If the liquid level doesn't reach to about halfway up the topmost layer of cabbage parcels, add enough stock to do that.

Bring pot to a boil over high heat. Once boiling, cover pot and turn heat down to simmer. Cook 1 hour. Remove the cover and continue cooking for another hour. If you want a thicker sauce, turn up the heat for the last 20 minutes or so. Taste for seasoning and add more salt and pepper, if needed.