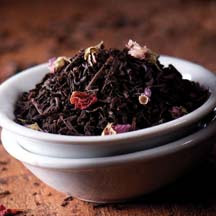 Did you know that a venti drip coffee at Starbucks contains 480mg of caffeine? Even their decaf has 20mg. Because caffeine tends to give me heart palpitations, I've started to drink more tea (an average cup of tea has between 40 - 60mg), particularly rooibos (caffeine free).

I've always liked a good cup of tea. Ok, I lie - not always. When I was a kid, the only tea we had around the house was that familiar red and yellow box of Lipton's, and it was always served with sugar and lemon, or when someone had a cold, honey and lemon. Lemon was a constant. Now, I think it's fine for iced tea, but I abhor it in hot tea. When my family visited London for the first time in 1976 and tried English Breakfast with sugar and cream, it was a revelation. I could get into drinking tea this way! It was like dessert in a cup, sweet and creamy, but also the tea flavor was bold and not obscured by the strident flavor of citrus. And to this day, that's the way I prefer my cuppa camellia sinensis.

Some teas aren't meant to be had with milk, or sugar for that matter. Over the years I've come to appreciate herbal teas, served neat, and always have tea with Chinese food (jasmine or hurn peen) or sushi (green, preferably genmaicha). It aids with digestion, and somehow just seems right.

I'm drinking more tea than ever these days and have been exploring different brands. Our supermarkets carry the usual suspects: Twinings, Celestial Seasonings, and the ubiquitous Lipton's. I do like some flavors of Celestial Seasonings, particularly the Madagascar Vanilla Red and the impossible-to-find Roastaroma. We keep tins of loose Twinings Earl Grey and English Breakfast tea in the cupboard, but their quality seems to have declined a bit over the years. Lipton has a place on the shelf as well, but only for use in iced tea. Mr Minx and I like to brew up a few plain orange pekoe bags along with several flavored tea bags (usually CS Zingers) in a saucepan of water, and dilute it with enough cold water to fill a gallon jug. This is our usual summertime libation. 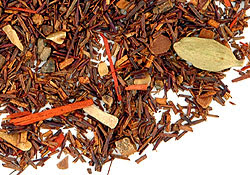 As for new and different teas, I stumbled upon the difficult to pronounce Tea Gschwender, a German company that sells its wares here in the US via a shop in Chicago and online. They have a large selection of teas, from black to white and everything in between. I particularly like their red, or rooibush teas. Not actually a tea, rooibos is a member of the legume family, the leaves of which are used to brew a tealike beverage that is completely caffeine-free and full of beneficial phytochemicals.

Another recent discovery is Zhena's Gypsy Teas, an all-organic, Fair Trade product. The rose-flavored Gypsy Love is delicious, with or without milk and sugar.

Mr Minx and I tend to like our tea on the strong side. A tea bag dunked in water just doesn't do it, and we don't mess around with cutesy pots and infusers. Instead, we use our trusty 4-cup Mr Coffee. Two bags in the basket, or a couple tablespoons of loose tea in a coffee filter, brews up quite a nice pot. Several pots, actually. Sometimes I can get two or three out of a single batch of leaves before it starts to taste weak. My current favorite is Winter Magic (pictured above), a rooibos from Tea Gschwender, with cinnamon and almonds bits, cardamom husks, red sandalwood, and cardamom seeds.

I still drink coffee a couple of times a week - decaf - but have really started to prefer a cup of tea most mornings. What's your favorite caffeine-delivery method?