We 've written about Waterfront Kitchen on numerous occasions, both on this blog and in our books. The incredible view from their airy dining room, the emphasis on fresh, seasonal ingredients in their cuisine, and the friendly atmosphere have always been a constant. The menu itself has changed over the years as each new chef has brought his own personal spin on the restaurant's traditions. Chef Cyrus Keefer, who's become well known in Baltimore for his inventive cuisine, is the current chef at Waterfront Kitchen and he brings a whole hosts of new ideas to the menu. We were eager to check it out. 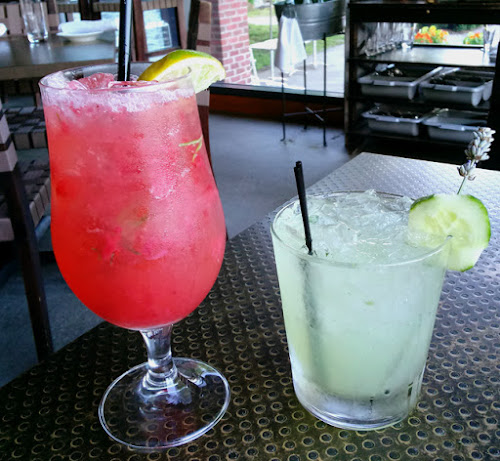 The Minx started off with the Strawberry & Basil cocktail made with basil vodka and muddled strawberries. I've finally come around to drinking gin in the summertime so I ordered the gin-based Cucumber & Lavender. Both drinks were light and refreshing for a warm day. 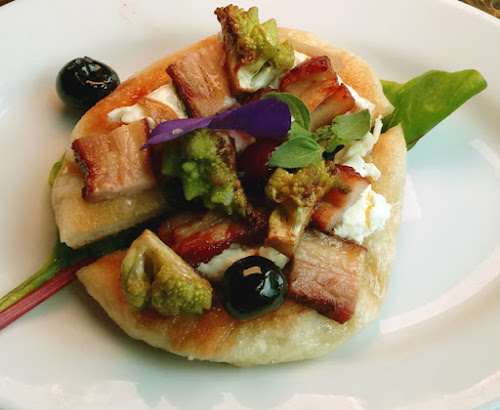 While our plan was to focus on some of the more popular dinner menu options, Chef Keefer had put together a special tasting menu for a group coming to the restaurant that night and he wanted us to sample some of the items. The pork belly pizzette was served on a soft crust topped with romanesco cauliflower, two kinds of cherries, and edible flowers from the BUGS greenhouse down the street. As we've mentioned in other posts, Waterfront Kitchen gets a great deal of their fresh fruits, herbs, and vegetables from the Baltimore Urban Gardening with Students (BUGS) Greenhouse, which is on the Living Classrooms campus on Caroline Street. Kids from low-income neighborhoods develop social, academic, and creative skills by learning how to grow food. They also sell some of the produce at an annual farmers’ market event. 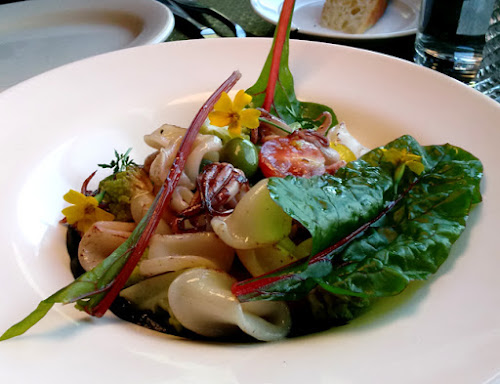 We fell in love with Chef Keefer's calamari when he was working at Birroteca, and it's still amazingly tender in this latest incarnation, served with baba ganoush made black by squid ink and a green olive insalada. The delicious house-marinated green olives are also available as a separate dish with some hummus, greens, and flatbread. Also on the dish are some of the edible flowers from the BUGS Greenhouse which bring a floral dimension to the dish I've never experienced before. 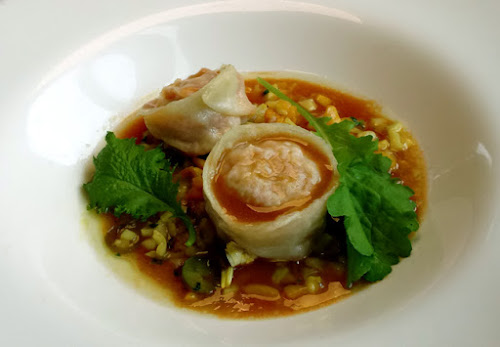 These shumai-style dumplings held a mixture of confit chicken and housemade 'nduja, a spicy, spreadable, pork salami. N'duja has become a new favorite thing of mine and this combination, nestled in a tender dumpling wrapper, took me to my happy place. At first glance, I thought the flecks in the sauce were grains of rice, but it turned out to be chopped up pieces of that tender calamari we love so much, Chef Keefer never stops inventing. 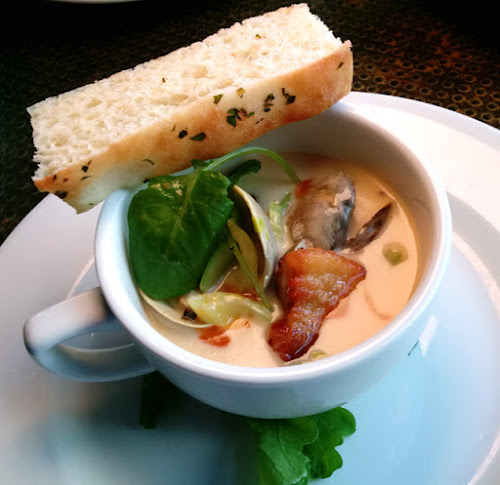 Okay, so now we're moving on to the regular dinner menu. We wanted to focus on the tried-and-true sorts of dishes that summer tourists might order, so we started with the clam chowder. This version of the New England staple has a bisque-like miso-enriched broth. The clams are served in their shells, and chunks of sunchoke, also called Jerusalem artichoke, stand in for the potatoes. 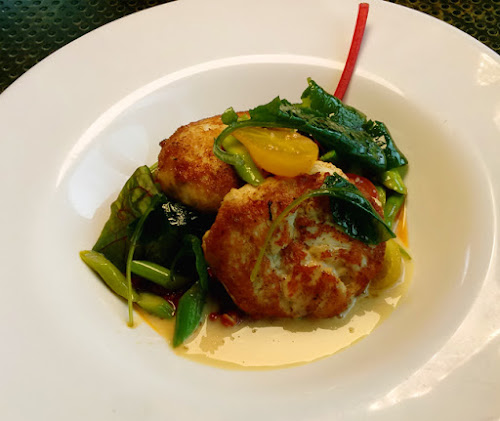 We had to try the crab cakes because - Baltimore - and we were intrigued by Chef Keefer's pronouncement that the cakes have no filler in them whatsoever. What they do have is plenty of lump crab and just the right amount of seasoning and another element that we won't give away. The result is a meaty yet light crab cake that's quite flavorful. The cakes were served with deviled asparagus, a subtle chorizo vin blanc, and a romesco sauce made with shishito peppers. 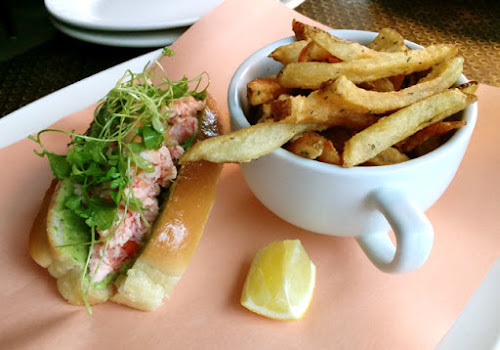 Our final entree was another New England classic, the lobster roll. The roll itself was the classic toasted split-top hot dog bun. From there, things take an eclectic turn as green curry and avocado sauce redolent of kaffir lime are tossed into the hefty pile of lobster meat and delicate pea shoots are sprinkled on top. Served with a side of French fries, this is a lobster roll that is a cut above. 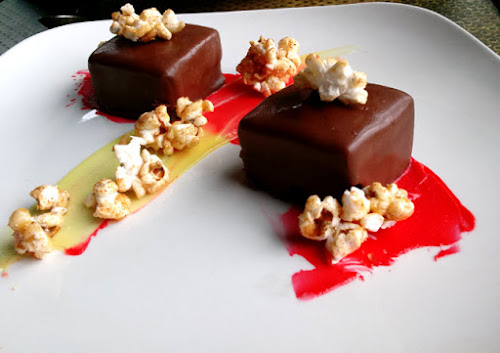 Waterfront Kitchen's pastry chef, Kelsey Willis, is only 21 years old but she shows a finesse with desserts that belies her youth. Our dessert had squares of moist chocolate cake filled with a beer-flavored custard all enrobed in a classic chocolate ganache. Housemade Old Bay-seasoned caramel corn is sprinkled on top and the plate is decorated with white chocolate tinted in yellow and red, making the dessert resemble an abstracted Maryland flag. On top of all that, it tasted great.

We're happy that Chef Keefer is working at Waterfront Kitchen these days, giving us an excuse to eat there more often. Not that we need an excuse, it's just that we don't get to Fells Point as often as we should.