Tuna Salad with a Twist 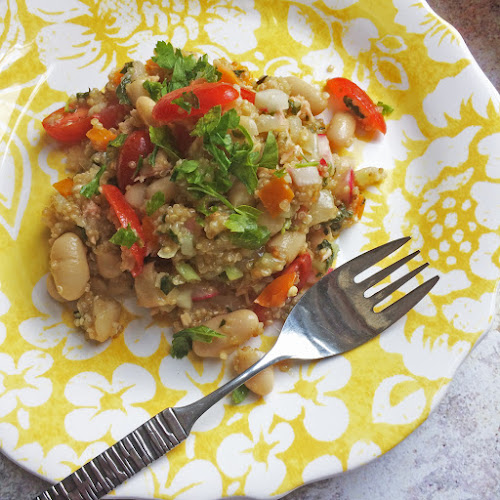 I've always had a love-hate relationship with canned tuna. Growing up Catholic, it was a big part of my diet, what with all the Lenten Fridays in my past. Tuna salad or tuna casserole were weekly occurrences, with occasional break for frozen fish sticks. Mom always bought the solid albacore in spring water, which I thought was too dry. But chunk light was too mushy and not as tasty. Once I got out of Catholic school and started feeding myself, I stopped eating tuna entirely. That is, until I discovered sushi.

Mr Minx likes canned tuna, though, especially the solid albacore, so I started eating tuna salad again. I never even thought of using canned tuna in any way other than salad or casserole, but then I got a couple cans of tuna from Tonnino, a company known for their fancy jarred tuna (like tuna belly, the yummiest, fattiest, part of the fish). They've just started offering tuna in cans, two varieties of solid 100% yellowfin--packed in spring water and packed in olive oil--and they sent us both to sample. I didn't want to smother this high quality fish in mayonnaise, so I had to come up with a different way of serving it. I thought the oil-packed stuff would be great in a salad Nicoise, but I didn't have any of the other components on hand. What I did have, however, were cans of cannellini beans, and I recalled that tuna and bean salad was a thing. I also had lemons and celery and cherry tomatoes, so they were going to play a part. I wanted to make it a little more substantial but not heavy, so I added quinoa, too.

What a great combination of textures and flavors! Crunchy veg and quinoa, tender beans, meaty tuna, lots of lemon. So good! And so much tastier than tuna with mayo.

I really liked the mild flavor of the Tonnino tuna in spring water. It wasn't fishy, and it didn't seem dry. And I like that they have finally given the nod to canned fish, because while the jarred tuna is pretty, cans stack better in the pantry!

Tuna and Cannellini Bean Salad with Quinoa
I used celery two ways in this dish, but you can use it all raw or all cooked, if you prefer.

In a medium saucepan, cook the onion, pepper, and half the celery in a tablespoon or so of olive oil and a big pinch of kosher salt over medium heat, stirring regularly, until vegetables have softened. Remove veg to a large bowl and add the beans and the leaves from the thyme sprigs. Cover and refrigerate.

Put the quinoa and 1 cup of water in the same saucepan that you used to cook the veggies. Bring to a boil, then turn the heat to low and cover the pot. Cook 10-12 minutes, then turn off the heat and allow the quinoa to sit for an additional 5 minutes. Fluff with a fork and add to bowl with beans and veg, stirring to combine. Cover and refrigerate until cool, at least 1 hour.

Make a dressing with the lemon juice, mustard, honey, and a some olive oil (I like equal parts acid and oil, but YMMV), beating with a fork to emulsify. Season to taste with salt and pepper.

When the quinoa and beans are chilled, pour over the dressing and toss. Add the tuna, tomatoes, radishes, and remaining celery and toss again. Taste for seasoning and add more salt or lemon juice, as needed. Garnish with parsley.