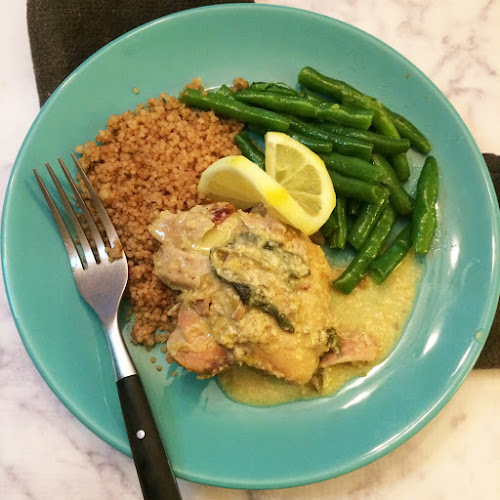 Years ago, when Mr Minx and I were regular Food Network watchers, we saw an episode of Jamie Oliver's show (The Naked Chef, I believe) in which he oven-braised a whole chicken in a pot of milk. Seemed a little weird, especially as he also added lemon peel, which curdled the milk. Jamie insisted the chicken was the best thing ever, so I filed the idea away in my head to make sometime in the future.

Flash forward a good 15 years when I stumble upon the recipe on the Internet. "Oh yeah," I think, "I was going to make this at some point." Better late than never is definitely true in this case.

I had to adapt the recipe somewhat. I don't have an oven-safe vessel that would comfortably hold a whole chicken, so I used the stovetop. Small chickens are nigh impossible to find in a regular supermarket, and if you know me, you'll know I'm not the kind of person who will go running around from store to store to find a perfect ingredient. Chicken thighs and chicken legs were more than good enough for the job, however, The recipe called for 10 cloves of garlic, skin-on, but my small bulb yielded 14 and I used all of them. I would, in the future, remove the skins, as they don't melt during cooking and are a little annoying to find in one's mouth.

The end result was pretty amazing. The chicken was meltingly tender, garlicky but not overwhelmingly so. The curds in the sauce were small and not entirely unappealing. Most of my liquid cooked away so I added a splash of milk at the end to create more sauce. I'd also, in the future, save some of the sage to chop up and sprinkle on at the end of cooking, for some fresh herbal flavor. This recipe will definitely go into my cooking rotation, as it was easy, used only one pot, and tasted great. Plus there's the possibility for variations: coconut milk and lime, perhaps, with makrut lime instead of sage; sub orange for the lemon; etc.

Chicken in Milk (adapted from a recipe by Jamie Oliver)

Melt the butter in a dutch oven over medium-high heat. Add the chicken, which you have salted and peppered, skin-side down and cook until browned on both sides. (You'll need to do this in two batches.)

Remove the chicken to a plate and drain any liquid fat from the pan, leaving the sticky crusty bits behind. Add the chicken back to the pot with the rest of the ingredients. Cover pot and bring to a boil. Turn heat down so the milk is just simmering and cook until chicken is falling-apart tender, about an hour, maybe a bit more. 90 minutes max. If you find that much of the liquid has boiled away, add half a cup or so additional milk toward the end of the cooking time, so you 'll have sauce.

Serve a few pieces of chicken per person with some of the juices spooned over, plus a green veg and some sort of starch to absorb the sauce. (I used quinoa.)