If you've never been to Tark's Grill before, let me warn you that it's not the easiest place to find. It's actually inside Greenspring Station, the little Cross Keys-like shopping area at Falls and Joppa Roads, not on the outside near Poulet. The signage is small, so keep your eyes peeled, especially at night!

We visited Tark's early on a Thursday evening, and it was already packed full of noisy people. I'm guessing many of them were regulars from before City Cafe owners Gino Cardinale and Bruce Bodie took over the restaurant. New ownership brought Tark's a new chef and new menus, all of which will be familiar to patrons of their Mount Vernon establishment. Chef James Jennings is doing double duty at both restaurants and is so far offering pretty much the same food at both, with a few exceptions. The menu will also seem familiar to patrons of The Food Market, as that restaurant's chef/owner Chad Gauss has run City Cafe's kitchen in the not so distant past and his influence is evident.

Seems complicated, but the food thankfully isn't. However, the menu is a bit puzzling. Similar to The Food Market's menu, there are multiple appetizer divisions like "Finger Food" and "First Bites," plus the less confusing "Principals." I'm not sure what the difference is between the first two categories, or why fried oysters and buffalo popcorn chicken are finger foods but warm brie flatbread and crispy calamari are "first bites." And why "first bites" is the second category on the menu. But maybe I'm the only one who notices these sorts of things. 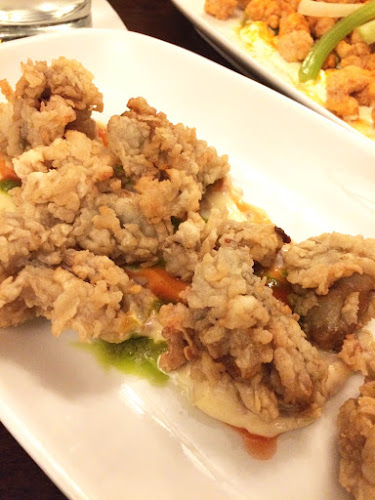 There were four of us at this particular dinner. Two of us had already eaten two large restaurant meals that week and weren't necessarily in the mood for a third, but it was my birthday and neither of the other two people in our party was going to cook for me.... Rather than share apps and order entrees, as we normally do, we just ordered a mess of "finger foods" and "first bites" in two rounds. We started with the fried oysters, buffalo popcorn chicken, brussels sprouts, and Korean bbq wings.

The oysters were my favorite of the bunch. They were barely cooked on the inside and nicely crunchy on the outside. The bacon aioli was rich, and despite being under the oysters, didn't render them unreasonably soggy. 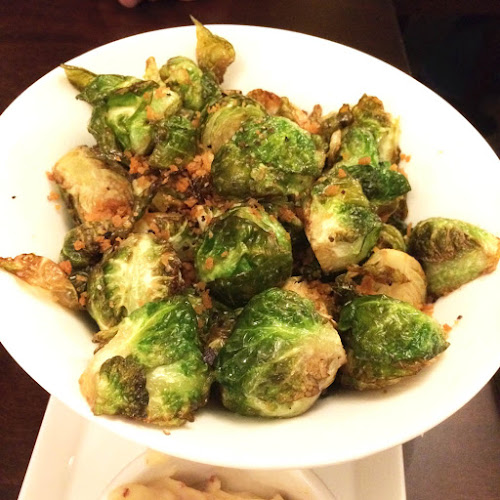 The brussels sprouts came in second. We are a family of brussels sprouts lovers and order them everywhere. We tend to enjoy deep fried ones best, because they are usually very crisp, but they're not particularly photogenic. The sprouts at Tark's were still very green, had a nice firm bite, and were well seasoned. They came with more of that nice bacon aioli. 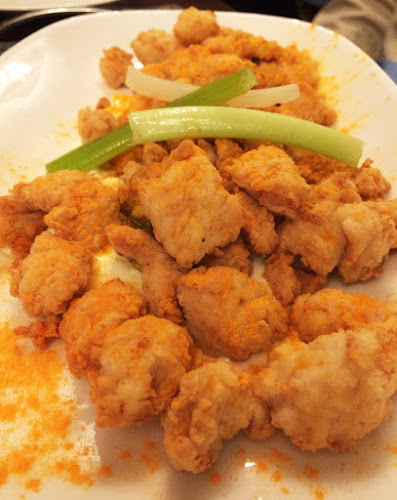 The popcorn chicken, which was dusted with a powder made with Frank's hot sauce, wasn't particularly attractive, nor was it at all crisp, but the bits of chicken were nicely tender and the flavors were good. 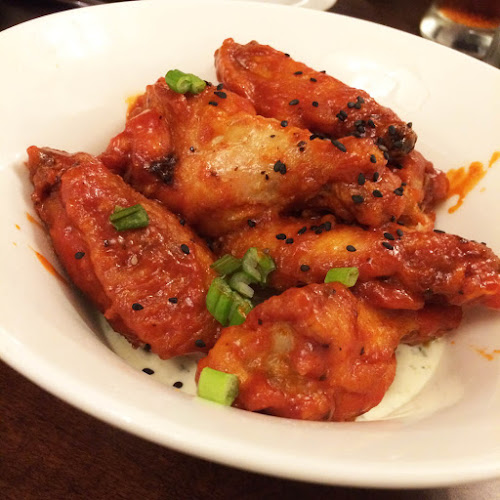 The Korean bbq wings could have used a lot more heat (and sweetness, and garlic, and sesame oil, a trifecta of flavors that is fairly prominent in many Korean dishes) but they were well-cooked, with the meat coming easily off the bone. 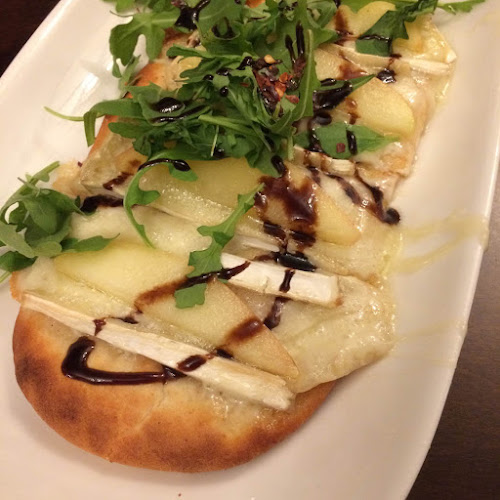 We also had four "first bites." The warm brie flatbread with slivers of apple and a balsamic glaze was pretty good. The brie was melted but not messy, and the apple added a hint of sweetness and crunch. 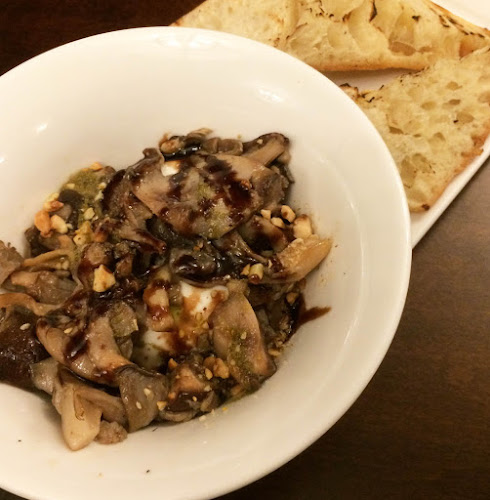 The warm burrata and wild mushrooms was a miss, however. I love burrata, the oozier the better. Its rich cheesiness matches best with something bright and acidic, like tomatoes, for contrast. The mushrooms in this dish were surprisingly bland and under-seasoned, and the milky cheese simply added more blandness. Personally, I think something sharper, like manchego, would make a better foil for the mushrooms. 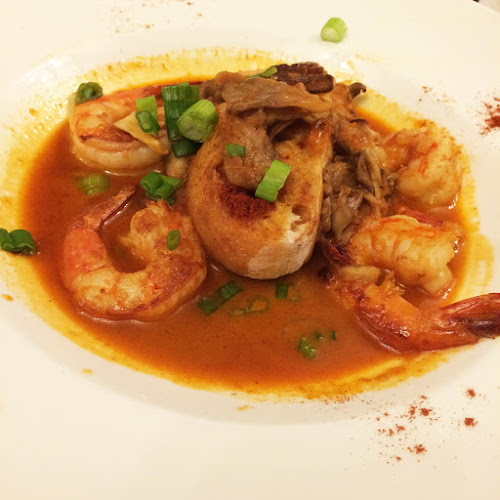 The Spanish shrimp--with mushrooms, garlic sauce, and smoked paprika--were tasty, if oddly-plated. Though the shrimp were large, the plate on which they were served was huge, and it took us a minute to realize the pile in the middle was comprised of chunks of bread and mushrooms. The bread was already saturated with sauce, and we had nothing with which to sop up the rest of it. (I know I'm not a professional chef, and you all probably hate when I do this, but I'm going to do it anyway. I'd 86 the mushrooms entirely, as they don't add anything to the dish, and put a smaller piece of bread under each shrimp. And use a smaller plate, and less sauce.) 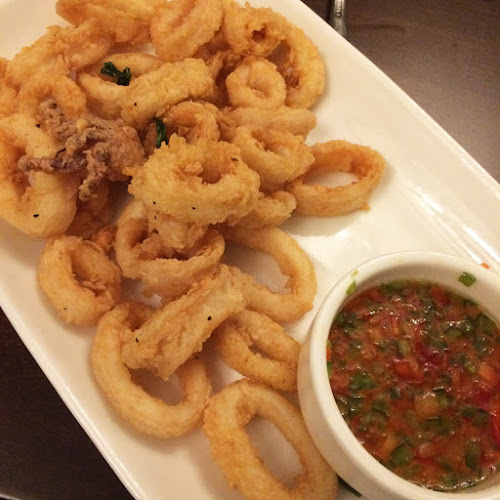 It's hard to fault the calamari though. They were so very tender, with a light crisp coating. The Thai dipping sauce was a nice change from the usual marinara. An actual pleasure to eat. 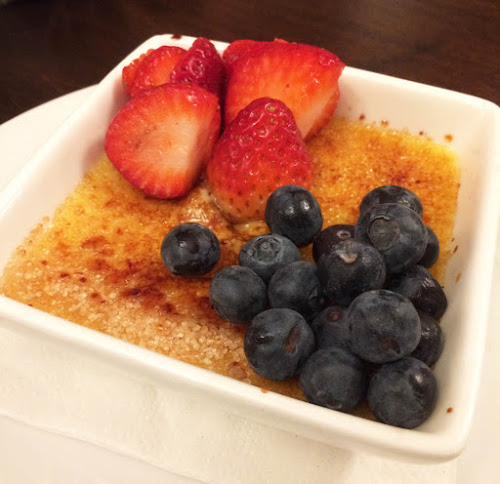 Since it was my birthday, and the restaurant had been made aware of that fact, I got a free birthday dessert, which was a real treat. We were pretty full at this point so decided to do two desserts to share among the four of us. The vanilla creme brulée with fresh berries was fine and enjoyed very much by my father. 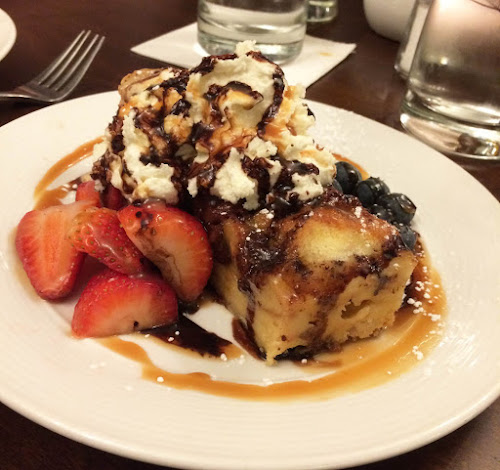 James' bread pudding with white, dark, and milk chocolate plus a caramel drizzle, whipped cream and berries, was indulgent. The pudding itself was tender and sweet and definitely large enough to share.

The original incarnation of Tark's Grill was a steakhouse--not our thing at all--so we're pretty pleased with the new version, at least concept-wise. I do think it deserves its own menu though, because I'm betting the Lutherville crowd is pretty different from the City Cafe's regular clientele (and The Food Market's). Perhaps it's not as necessary to offer 33 appetizers, 20 entrees, and 7 side dishes in the county? Or maybe it is. I'm sure Bruce and Gino will figure it out; they've been successful restaurateurs so far. I hope Tark's is a hit for them, as it's nice to have another locally owned, non-chain, restaurant in our neck of Baltimore County.