If you've heard mention of "West County" recently and wasn't sure what it referred to, it's the western part of Anne Arundel County, which includes Hanover, Odenton, and Fort Meade. Not exactly the most glamorous area, unless you consider the fastest growing part of West County, Hanover's Arundel Mills development. In addition to the mall and Maryland Live! casino, Arundel Mills now boasts plenty of new housing and amenities. One of the newest communities in the development is Arundel Preserve. Just off 295 on Arundel Mills Boulevard, the Preserve is home to the swank new Hotel at Arundel Preserve and its two restaurants by New York restaurateur George Martin, Vivo and Grillfire.

Mr Minx and I were invited to taste some of Vivo's offerings at a recent media dinner. We started out with a few appetizers for the table before ordering entrees of our own.

We started out with a generous charcuterie plate featuring three Italian meats and three Italian cheeses, a nice combination of salty, savory, and creamy, punctuated by a sweet fig jam and olives. With a bottle of wine, it could make a nice meal in itself. And it was served on a gorgeous slab of burl wood that sadly was too large to fit in my purse....

We also sampled one of the restaurant's dozen pizzas, made in the Wood Stone oven visible just beyond the window into the open kitchen. In addition to the classic Margherita and white pizzas, Vivo has creative variations like crab imperial with mascarpone and a red pepper aioli, and proscuitto & pear with gorgonzola dolce. Yes, please!


We also received a sampling of Vivo's arancini, which our host, Diane, says is the best she's had since her trip to Italy. The generously-sized balls of risotto and spinach were indeed quite nice, creamy and piping hot inside, with a delicate crust that was just barely able to hold in the molten rice.

When Mr Minx, aka Mr Pasta, saw that Vivo offered one of his favorite pasta preparations, pasta Carbonara, he had to order it. The house-made bucatini was coated in a rich and cheesy sauce studded with bits of pancetta and peas and topped with a soft cooked egg. It was decadently delicious.

I opted to avoid pasta and chose a meat entree that came with potatoes, just to be different. While osso buco is traditionally made with veal shank, pork shank works just as well. The one I received was gargantuan, and the spoon-tender meat was glazed with a sheen of tomato gravy and a sprinkle of herbs. The potatoes were darkly roasted and had a mild rosemary flavor that did not detract from the lusciousness of the meat.

Other dishes at our table include chicken Parmesan, which our tiny host ordered without cheese because she's afraid of getting fat like me. (I'm happy to eat her cheese for her.) The breast cutlets were thin and crispy, and I liked that the breading wasn't over-seasoned.


Another tablemate had the bucatini in a creamy sauce flavored with Chardonnay and thyme and studded with bits of lobster and shrimp. After tasting it, I almost regretted my decision not to order pasta, because it was delicious, with a nice brininess from the seafood. Vivo makes all of its pasta (except the linguine) in-house, from gnocchi to ravioli to rigatoni, using their fancy imported pasta machine.

Despite being stuffed, we also sampled a trio of the restaurant's desserts, including a lovely light tiramisu served in a jar and garnished with a crisp biscotto. While cute, the jar lid was heavy and made the container a little tipsy. 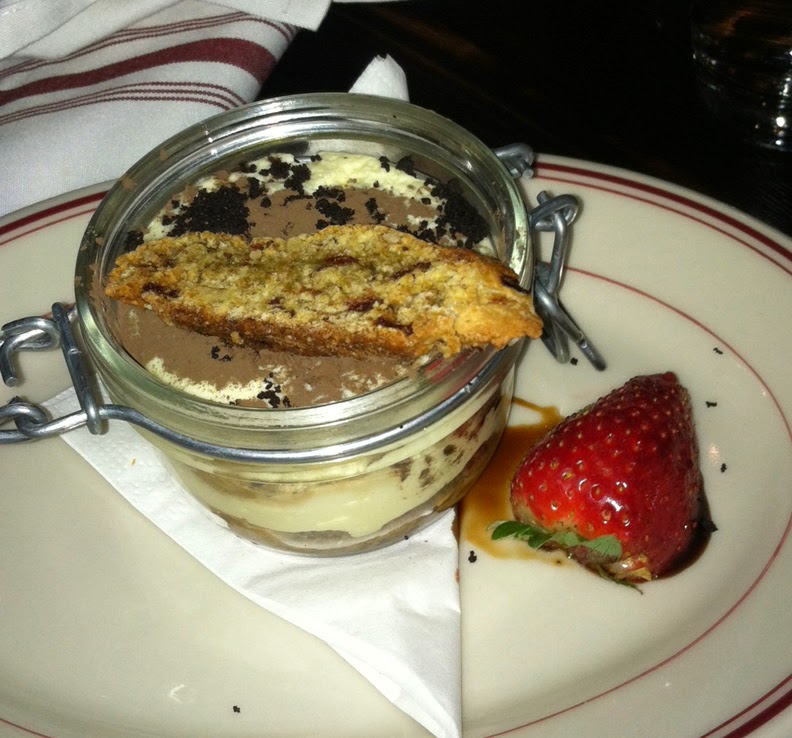 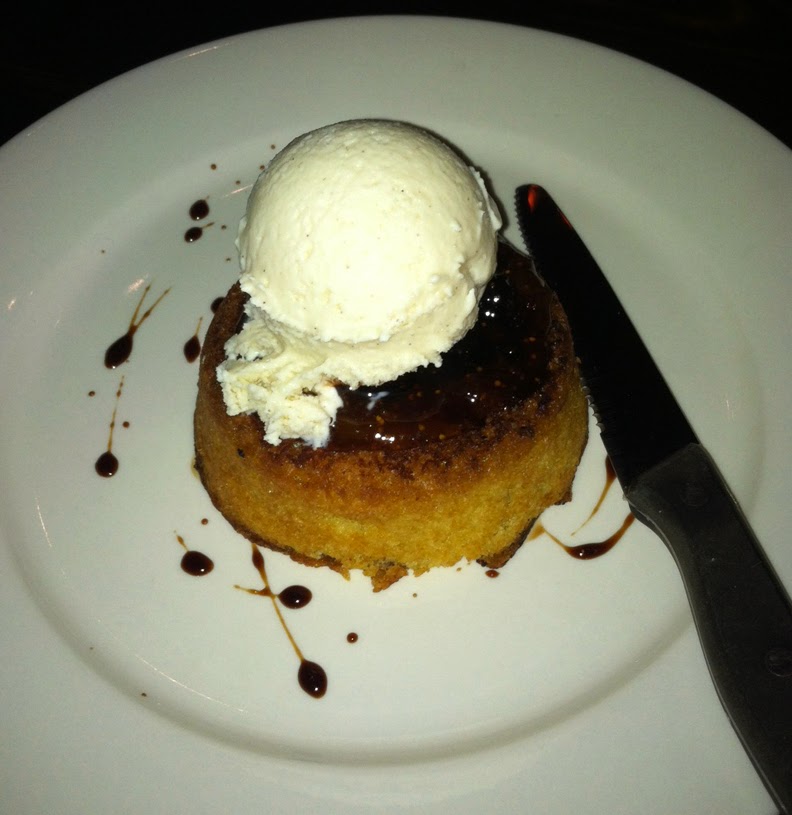 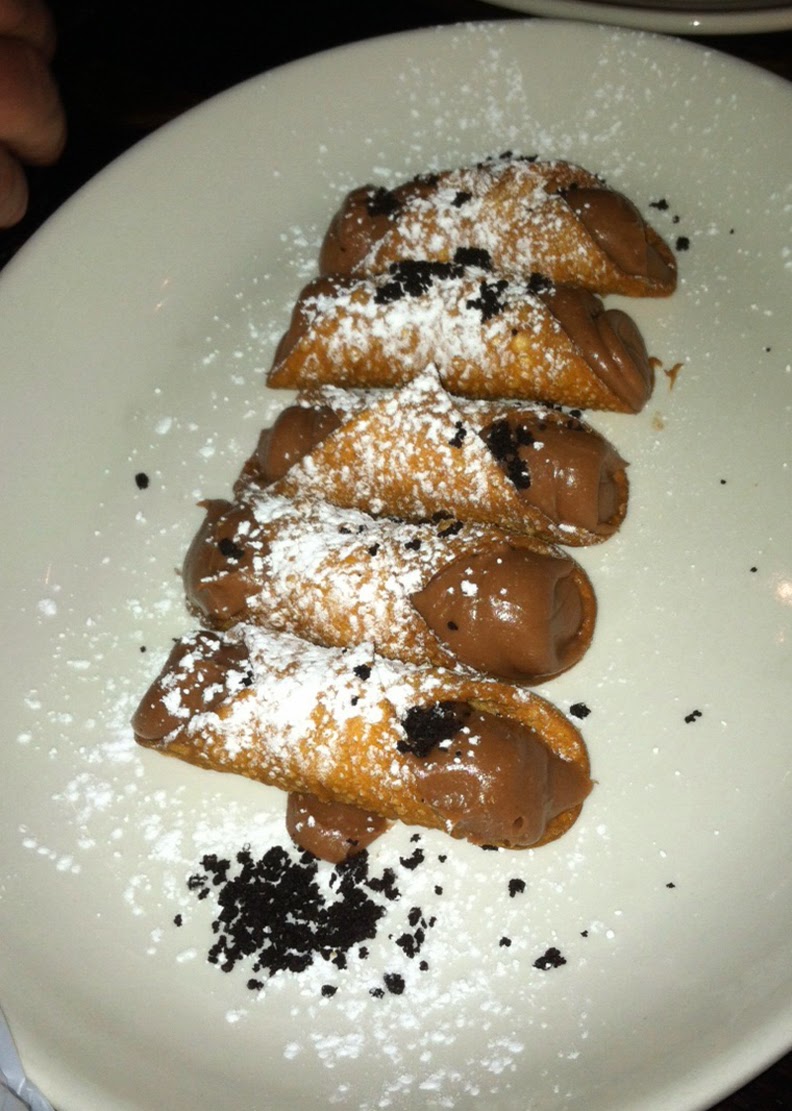 Despite trying several dishes, we really tasted only a small selection of the goodies Vivo has to offer. We can hardly wait to go back and try the crispy Parmesan polenta, lobster risotto, malfadine Bolognese, rockfish and baby clams Livornese, and some of the more non-traditional pizzas. But first, we have to check out Grillfire, the George Martin restaurant across the lobby, which seems to have a pretty rocking happy hour....