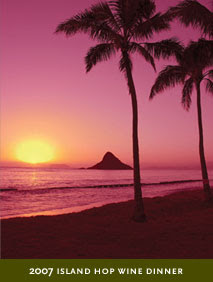 We love Roy Yamaguchi's Hawaiian fusion food and eat at his local outpost at Harbor East at least a couple of times a year. Yesterday, they had their annual "Island Hop" dinner, a five course wine-paired extravaganza, and we were there to join in the revelry.

The last wine dinner we attended at Roy's was odd. The food was marvelous, the wines were meh, but the company at the communal tables for 12 was less than stellar. We hoped that this time everything would be of high quality. I'm happy to report that our dinner companions, Nicola and Brad, were delightful. They had recently returned from their fourth trip to Hawaii and had interesting tidbits to share with us. They were friendly, engaging, and not in the least bit weird (that we could tell). We were separated by two empty seats from a party of four who also seemed to be really nice folks. So the company aspect was greatly improved. And I'm sure the very strong and sweet Mai Tai we received before the start of the meal played a part in the overall conviviality of the evening.

The wines were quite good, particularly the Zinfandel we enjoyed with our main course. It was dark and rich and redolent of fresh plums and chocolate-covered dried cherries. And the champagne served with our first seafood course was extremely yeasty in aroma but light and mild in flavor.

The food, however, didn't quite live up to my usual expectations of Roy's kitchen. It wasn't the fault of the staff at Harbor East necessarily; I think that some of the combinations of flavors were not particularly well-conceived by the Roy's chefs who were asked to contribute dishes to the menu.

Our first course was Pupu Style Honoka'a Spiced Sirloin Steak, served with a Chalome Vineyard, Monterey County Pinot Noir, 2005. The steak was mid-rare, served in a stack of slices, topped with a dollop of "pesto" made with a type of Japanese capsicum. The meat was nicely tender, and the pesto was good, but I thought the spices were negligible, and the temperature was off-puttingly cold. The pinot was a good match, fragrant and soft, with no tannins to overcome the mild meat.

Second was my favorite course: Ceviche of U-10 Dayboat Scallops & Crab Salad, served with Moet & Chandon "White Star" Champagne, NV. The dish was originally supposed to feature abalone, but chef Rey Eugenio explained that the shipment of the expensive shellfish arrived in Baltimore on Friday, but he was not alerted about it until Monday. Over the weekend, it had gone bad. So he scrambled to find a substitute and went for scallops. If they were U-10s though (a designation meaning "under 10 per pound") they had been cut down a bit. On elongated plates, we received three medallions of scallop, each about the diameter of a half dollar and twice as thick. They had been marinated ceviche-style, so although opaque, they had the silky smooth texture of raw scallop. Gilding the lily were dollops of crab salad, tasting of fresh blue crab dressed with a bit of a mayo-based sauce and garnished with a slightly bitter type of microgreen and granules of black lava salt. I could have eaten three portions of this dish, it was so good. Better than the scallop dish at Morimoto, hands down.

Our third course was seafood again: Seared Rare Ono Sashimi, Lobster, Hearts of Palm & Pancetta, served with a Boschendal "Grand Cuvee Reserve" South African Sauvignon Blanc, 2006. Here's where components didn't seem to work for me. The ono, or wahoo, a large Hawaiian fish related to mackerel, was crusted in Sichuan peppercorns. The fish was very mild and silky, but the only thing the peppercorns contributed was a crunch akin to finding sand in one's food. There wasn't enough of it to be flavorful, and definitely not enough to produce the tongue-numbing sensation for which the tiny buds are famous. There was a streak of lemon-flavored cream near the ono that we were instructed to swipe each morsel of fish through before popping into our mouths. It added just enough extra spark to the very neutrally-flavored seafood. On one side of the plate were two heirloom tomatoes the size of large cherries, separated by a curl of fried pancetta. The tomatoes had a cooked, canned-tomato texture and flavor, as if they had remained in the blanching water (the skins had been removed) for too long. On the other side of the fish was a nicely-cooked bit of lobster claw meat reclining on some wilted spinach that was mixed with slivers of crisp hearts of palm and flavored with much garlic. The lobster in itself was a nice dish, but I didn't see the relation to the ono or the weird tomatoes. The wine, on the other hand, was crisp and flavorful, with the fragrance of ripe pears.

For a fourth course, we were presented with a Grilled Venison Chop, Kalbi Pork & Thai Citrus Shrimp, served with a Rosenblum Cellars, San Francisco Bay Zinfandel, 2005. Another course that didn't seem quite right. The generously-sized venison chop was medium-rare, very tender, and possessing a nice liver-y but not quite gamey flavor. The purple mashed potatoes that served as its nest were very creamy and had a good, simple, potato flavor. Next to it, was a thick slice of somewhat garlicky, kinda tough, pork belly that was very difficult to cut, topped with a sadly-overcooked citrus-marinated shrimp. The flavors were good, but the textures there were off, and I didn't see the connection between the venison, pork, and shrimp. There was also a vegetable accompaniment consisting of a few pieces of slender asparagus tips and loose leaves of brussels sprouts flavored with soy. The wine, however, was the best of the bunch, plummy and rich, matching well with the venison and pork and even the vegetables.

Last but not least came dessert: Guava Chiffon Shortcake, Lilikoi & Strawberries, served with Kona coffee or tea. By this point, I was getting tired of eating, but the shortcake was a fluffy delight flavored with guava. There were some blueberries in with the strawberries, and the whipped cream tasted of passion fruit. My decaf was a little weak, and I can't speak for the hi-test version.

Multicourse meals are not without their little disappointments, and this one was certainly no exception. But we'd do it again, because we're foodies, and we're always optimistic that we'll be served at least one exceptional dish.