Greening in the Garden 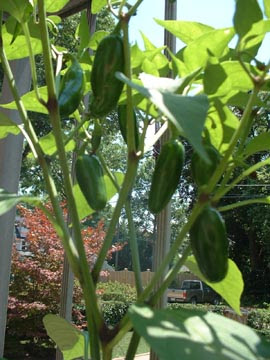 Every summer, my husband and I plant our little gardens. He's in charge of the flower garden in our shade-plagued front yard and he stocks it with impatiens, coleus, petunias, salvia, and always a single lonely geranium. He also tends to the monster hostas that threaten to take over with their giant variegated leaves. My garden consists of several containers on our kitchen porch. In addition to the must-have cherry tomatoes and basil, this year we also have rosemary, lemon verbena, and jalapeno peppers.

I was worried that since we planted fairly late this year (nearly mid-June) that we wouldn't have the harvest we have had in the past. On the contrary - the jalapeno plant has already yielded 10 or so fruits and is bearing another half dozen as I type this, in addition to the flowers signaling more to come. The three varieties of miniature tomatoes (Sweet 100s, Yellow Pear, and some sort of mini-me Plum variety) are growing like crazy and it looks like we're going to have a plethora of fruit all at once.

I thought it might be interesting to try using up some of the tomatoes while they were still green and found this Mario Batali recipe for spaghetti with a green tomato sauce on the Food Network site. 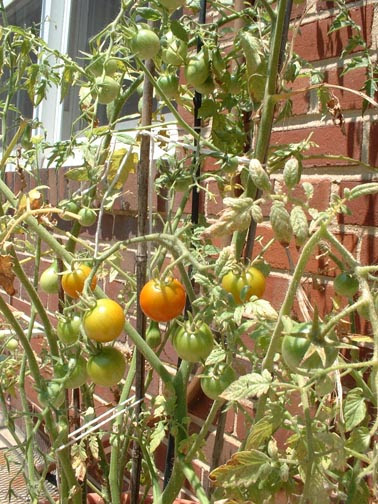 Bring 6 quarts of water to a boil and add 2 tablespoons salt.

In the bowl of a food processor combine the herbs, tomatoes and garlic and puree. Add the cheese and pulse for 30 seconds.

Cook the pasta in the boiling water until tender yet al dente. 1 minute before the pasta is done, turn on the food processor and slowly drizzle the oil in to make a smooth sauce. Drain the pasta, discarding the water, and return to the hot pot. Stir in the tomato mixture, season with salt and pepper, to taste and serve immediately. 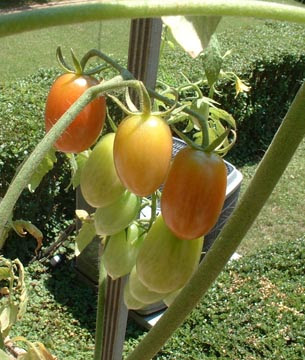 The effect was largely that of a mixed herb pesto. I used two handfuls of my small tomatoes, probably equivalent to three or so larger ones, rather than the five called for. Thus, the tomato flavor was negligible. We didn't have the dill, so omitted it, but I think we'd definitely try to obtain some the next time we make this recipe. The mint really added a light and summery quality to the dish, and I was happy that we had a package of the stuff in the fridge. Half of it was turning brown, but there was almost exactly a quarter cup of green leaves left.

Because it reminded me so much of regular basil pesto, I garnished each plate with a few pieces of crushed walnut and an additional smattering of grated Parmesan. Other than making sure I had more dill and more tomatoes, I'd also add more garlic to the dish. One clove did add obvious garlic savor, but two would be even better. Especially if one gets to breathe on people the next day. ;)
Posted by theminx